People who use sacred texts have often found ways of selecting passages appropriate to their needs. Disciples of Confucius used a complex system of hexagrams, chosen by lot, to find images and comments suitable to their time, place and situation. In classical and medieval times, the writings of Virgil and Homer were used in a similar way. Sometimes the Bible was accessed by lot or dice or random procedures. The Church responded to the need to select appropriate wisdom from the Bible, by the daily lectionary, a selection of readings for every day in the year, which was originally used in monasteries, but has for some time been used in daily mass in the Catholic Church, and for private devotion in others. Obviously the choice of passages reflects a theology and the Christian calendar, but it also has an arbitrary element. It asks the reader, “Can this wisdom be applied to your soul, your community, your place, today?” This blog follows the daily readings and hopes to uncover some wisdom.

21 ‘If the wicked, however, renounces all the sins he has committed, respects my laws and is law-abiding and upright, he will most certainly live; he will not die.

22 None of the crimes he committed will be remembered against him from then on; he will most certainly live because of his upright actions.

23 Would I take pleasure in the death of the wicked — declares the Lord Yahweh — and not prefer to see him renounce his wickedness and live?

24 ‘But if the upright abandons uprightness and does wrong by copying all the loathsome practices of the wicked, is he to live? All his upright actions will be forgotten from then on; for the infidelity of which he is guilty and the sin which he has committed, he will most certainly die.

25 ‘Now, you say, “What the Lord does is unjust.” Now listen, House of Israel: is what I do unjust? Is it not what you do that is unjust?

26 When the upright abandons uprightness and does wrong and dies, he dies because of the wrong which he himself has done.

27 Similarly, when the wicked abandons wickedness to become law-abiding and upright, he saves his own life.

28 Having chosen to renounce all his previous crimes, he will most certainly live: he will not die.

Let’s be clear what this says: that the sinner who has determined to go straight will have his former sins forgiven, whereas the decent man who has gone wrong will have his former good deeds forgotten! Or have I missed something? It also seems to be factually untrue: the good often die and the bad often have long lives. Perhaps one can suggest that it applies to Israel as a nation, but even then, it is pretty poor stuff. Ezekiel can be inspiring, but not in this utterance.

20 ‘For I tell you, if your uprightness does not surpass that of the scribes and Pharisees, you will never get into the kingdom of Heaven.

21 ‘You have heard how it was said to our ancestors, You shall not kill; and if anyone does kill he must answer for it before the court.

23 So then, if you are bringing your offering to the altar and there remember that your brother has something against you, 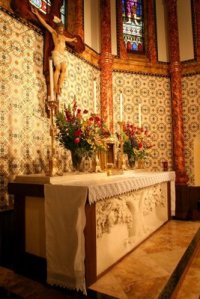 Leave your gift at the altar and make things right with your brother...

24 leave your offering there before the altar, go and be reconciled with your brother first, and then come back and present your offering.

25 Come to terms with your opponent in good time while you are still on the way to the court with him, or he may hand you over to the judge and the judge to the officer, and you will be thrown into prison.

26 In truth I tell you, you will not get out till you have paid the last penny.

These teachings of Jesus from the “sermon on the mount” are very well known, but perhaps not so well understood. Jesus contrasts an obedience which comes from the whole heart, with one that is more formal. Matthew wants to show him rejecting the accusation that “he’s soft on sin.” The just living which Jesus demands goes beyond violent actions to the motives and relationships which fuel violence. In Jesus’ “regime”, or, we might say, under Jesus’ shariah law, the court would deal with violent attitudes and language with severity. Equally, religious offering is not a substitute for righting the wrongs done to a brother or sister. Jesus reminds people that if they owed a debt, they might come to a settlement out of court, rather than expose themselves to a harsher justice in court. Well, he says, aren’t we always on the “way to court”, where we have to account to God for our lives? If we’ve injured someone it might be better to settle up now….

There is an underlying humour in Jesus’ language, an imaginative robustness which would have brought home his radical message to his hearers. The message is still radical, urging us to expose our inmost selves to God’s rule, cleansing our religious behaviour of hypocrisy, and giving urgent priority to righting the wrongs done to others.