Although this blog follows the Catholic daily bible readings, I have today missed out a long reading from the book of Daniel, the story of Susanna and the elders.

1 and Jesus went to the Mount of Olives.

2 At daybreak he appeared in the Temple again; and as all the people came to him, he sat down and began to teach them.

3 The scribes and Pharisees brought a woman along who had been caught committing adultery; and making her stand there in the middle

4 they said to Jesus, ‘Master, this woman was caught in the very act of committing adultery,

5 and in the Law Moses has ordered us to stone women of this kind. What have you got to say?’

6 They asked him this as a test, looking for an accusation to use against him. But Jesus bent down and started writing on the ground with his finger.

7 As they persisted with their question, he straightened up and said, ‘Let the one among you who is guiltless be the first to throw a stone at her.’

8 Then he bent down and continued writing on the ground.

9 When they heard this they went away one by one, beginning with the eldest, until the last one had gone and Jesus was left alone with the woman, who remained in the middle.

10 Jesus again straightened up and said, ‘Woman, where are they? Has no one condemned you?’ 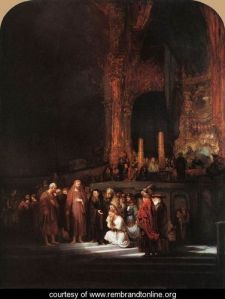 This astonishing story is a Cinderella of the New Testament, in that it is owned by no one Gospel. It appears at this place in John only in comparatively late manuscripts, and is also occasionally attached to Luke’s Gospel chapter 20. In spite of this, the church has always accepted it as a genuine gospel story- accepted, indeed, but somewhat grudgingly, especially in the Reformed tradition. There is something about it that sticks in the throat of the male rulers of society and church.

The little details given by the narrator are very telling.

Jesus appears in the Temple at “daybreak”, that is, at the dawn of a new kind of teaching. The scribes and Pharisees “bring” a woman, that is, by force. They “make her stand in the middle”, using their religious authority to humiliate her, in front of a crowd. With lip-smacking self-righteousness, they tell Jesus that she was caught in the “very act” of committing adultery-probably they set a trap for her. The Greek word for “the very act” is autophoro, a legal sounding word for an indecent act of spying. And where is the man? It takes two to tango. They remind Jesus that the Law of Moses requires the community to stone “women of this kind”-this particular woman is unimportant. She is one of a kind.

In any case they are more concerned to trap Jesus than to seek justice. The trap is a double one: 1. What can the master of forgiveness do when the Law is so clear? 2. Encouragement to stone the woman will challenge the Roman prohibition of Jewish authorities carrying out the death penalty.

Jesus writes with his finger on the ground, showing that the judgements of self-righteousness are written in dust.

With the most delicate sarcasm, Jesus replies, “Let the sinless one (anamartolos) in your group throw the first stone. As if, of course, every team of Pharisees had an anamartolos, just as every football team has a striker.

Even when the scribes and Pharisees are defeated they retire in due order, like a procession of cardinals or a properly constituted presbytery.  Only the accused is left standing. Jesus asks her to confirm the victory, “Has no-one condemned you?” She does so, perhaps nervously, not knowing what the one remaining “judge” may do. But Jesus refuses to be a judge, and sends her back into life, with a smile, to become “sinless.”

All sinners can only be glad that this story has been preserved.