8 The voices of your watchmen! Now they raise their voices, shouting for joy together, for with their own eyes they have seen Yahweh returning to Zion.

9 Break into shouts together, shouts of joy, you ruins of Jerusalem; for Yahweh has consoled his people, he has redeemed Jerusalem.

10 Yahweh has bared his holy arm for all the nations to see, and all the ends of the earth have seen the salvation of our God.

The messenger comes, as from a victorious battle bearing news of God’s rule. At the same time the watchmen on the city walls spot the return of the people led by God to the holy city. The gospel herald and the waiting city have the one message. The return of God is good news if it means the liberation of the captives in Babylon. Liberation theology insists that the presence of God always means freedom for the oppressed, the poor, the marginalised; and is therefore always good news for them and bad news for the oppressor. If Christmas has become so bland that it’s good news for everyone, even for Herod, it has lost its identity. If God comes as a baby in a stable, all the bullies of the world should know their number’s up. 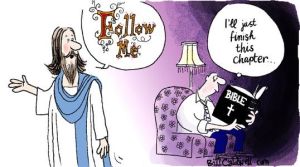 2 He was with God in the beginning.

4 What has come into being in him was life, life that was the light of men;

5 and light shines in darkness, and darkness could not overpower it.

7 He came as a witness, to bear witness to the light, so that everyone might believe through him.

8 He was not the light, he was to bear witness to the light.

9 The Word was the real light that gives light to everyone; he was coming into the world.

10 He was in the world that had come into being through him, and the world did not recognise him.

11 He came to his own and his own people did not accept him.

12 But to those who did accept him he gave power to become children of God, to those who believed in his name

13 who were born not of blood, nor of the will of the flesh, nor of man’s will, but of God.

14 The Word became flesh, he lived among us, and we saw his glory, the glory that he has from the Father as only Son of the Father, full of grace and truth.

15 John witnesses to him. He proclaims: ‘This is the one of whom I said: He who comes after me has passed ahead of me because he existed before me.’

16 Indeed, from his fullness we have, all of us, received — one gift replacing another,

17 for the Law was given through Moses, grace and truth have come through Jesus Christ.

18 No one has ever seen God; it is the only Son, who is close to the Father’s heart, who has made him known.

“who were born not of blood, nor of the will of the flesh, nor of a man’s will but of God”-so many people ignore the context and think of these words as applying to Jesus. In fact they apply to believers. The climax of John’s prologue is not simply that the Word became flesh, but that flesh can become sons and daughters of God. Meister Eckhart asks, “What good is it to me if Messiah was born a thousand years ago in Palestine if he is not born in me today?” Jesus identity is transgressive: it includes his followers. The birth at Bethlehem is for the rebirth of humanity.