3 In this way we know that we have come to know him, if we keep his commandments.  4 Whoever says, ‘I know him’ without keeping his commandments, is a liar, and truth has no place in him. 5 But anyone who does keep his word, in such a one God’s love truly reaches its perfection. This is the proof that we are in God. 6 Whoever claims to remain in him must act as he acted.

You cannot serve God and Money

7 My dear friends, this is not a new commandment I am writing for you, but an old commandment that you have had from the beginning; the old commandment is the message you have heard. 8 Yet in another way, I am writing a new commandment for you — and this is true for you, just as much as for him — for darkness is passing away and the true light is already shining.9 Whoever claims to be in light but hates his brother is still in darkness. 10 Anyone who loves his brother remains in light and there is in him nothing to make him fall away. 11 But whoever hates his brother is in darkness and is walking about in darkness not knowing where he is going, because darkness has blinded him.

There is not some super-salvation mode of knowing Jesus which allows people to neglect his commandments. If we sideline his commandments on wealth, non-violence, divorce or forgiveness, for example, we reveal how little we know him. John, the writer of this letter, has a tendency to reduce all Jesus’ commands to love of brother. This is the old command, “You shall love your neighbour (fellow Israelite) as yourself.” But it is not quite good enough as a summation of Jesus’ love which reaches out to the stranger and the enemy. We might ask the “apostle of love” if he knows Jesus as well as he thinks. The nice thing about commandments is that they are specific: best to keep them that way.

25 Now in Jerusalem there was a man named Simeon. He was an upright and devout man; he looked forward to the restoration of Israel and the Holy Spirit rested on him.

26 It had been revealed to him by the Holy Spirit that he would not see death until he had set eyes on the Christ of the Lord. 27 Prompted by the Spirit he came to the Temple; and when the parents brought in the child Jesus to do for him what the Law required, 28 he took him into his arms and blessed God; and he said:

29 Now, Master, you are letting your servant go in peace as you promised; 30 for my eyes have seen the salvation 31 which you have made ready in the sight of the nations; 32 a light of revelation for the gentiles and glory for your people Israel.

33 As the child’s father and mother were wondering at the things that were being said about him, 34 Simeon blessed them and said to Mary his mother, ‘Look, he is destined for the fall and for the rise of many in Israel, destined to be a sign that is opposed-35 and a sword will pierce your soul too — so that the secret thoughts of many may be laid bare.’ 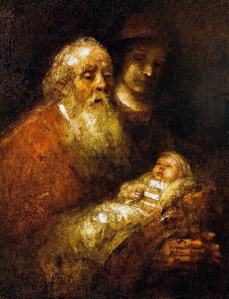 a sword will pierce your own heart also..

Jesus’ parents obeyed the commandment about the presentation of children in the Temple. Simeon has obeyed commands all his life, and like Mary belongs to the “poor of the Lord”, that is, those ordinary people who await in faith the coming of the Messiah. Because of his obedience, he is open to the prompting of God’s Spirit. He represents the possibility that Israel will welcome Jesus as her Messiah, as her true glory, to whom the Gentiles also will turn. But there is a dark note in Simeon’s farewell vision, “the fall and rise of many in Israel”, a “sign that is opposed”, the “sword that will pierce” Mary’s soul, all these point to Jesus’ rejection by his own people.

Luke defines salvation as Jesus: “my eyes have seen your salvation.” It is not an abstract spiritual transaction; it is God amongst us.

WARNING!! From Saturday 1st Jauary, this blog will be based on the Revised Common Lectionary as used by the Episcopal Church. My thanks to the Roman Catholic Church for the use of their daily readngs for Mass.