Aung San Suu Kyi  has written these noble words for her Reith Lecture: “Passion translates as suffering and I would contend that in the political context, as in the religious one, it implies suffering by choice: a deliberate decision to grasp the cup that we would rather let pass. It is not a decision made lightly – we do not enjoy suffering; we are not masochists. It is because of the high value we put on the object of our passion that we are able, sometimes in spite of ourselves, to choose suffering.”

6The ark of the Lord was in the country of the Philistines for seven months. 2Then the Philistines called for the priests and the diviners and said, ‘What shall we do with the ark of the Lord? Tell us what we should send with it to its place.’ 3They said, ‘If you send away the ark of the God of Israel, do not send it empty, but by all means return him a guilt-offering. Then you will be healed and will be ransomed; will not his hand then turn from you?’ 4And they said, ‘What is the guilt-offering that we should return to him?’ They answered, ‘Five gold tumours and five gold mice, according to the number of the lords of the Philistines; for the same plague was upon all of you and upon your lords. 5So you must make images of your tumours and images of your mice that ravage the land, and give glory to the God of Israel; perhaps he will lighten his hand on you and your gods and your land. 6Why should you harden your hearts as the Egyptians and Pharaoh hardened their hearts? After he had made fools of them, did they not let the people go, and they departed? 7Now then, get ready a new cart and two milch-cows that have never borne a yoke, and yoke the cows to the cart, but take their calves home, away from them. 8Take the ark of the Lord and place it on the cart, and put in a box at its side the figures of gold, which you are returning to him as a guilt-offering. Then send it off, and let it go on its way. 9And watch; if it goes up on the way to its own land, to Beth-shemesh, then it is he who has done us this great harm; but if not, then we shall know that it is not his hand that struck us; it happened to us by chance.’

10 The men did so; they took two milch-cows and yoked them to the cart, and shut up their calves at home. 11They put the ark of the Lord on the cart, and the box with the gold mice and the images of their tumours. 12The cows went straight in the direction of Beth-shemesh along one highway, lowing as they went; they turned neither to the right nor to the left, and the lords of the Philistines went after them as far as the border of Beth-shemesh.

13 Now the people of Beth-shemesh were reaping their wheat harvest in the valley. When they looked up and saw the ark, they went with rejoicing to meet it. 14The cart came into the field of Joshua of Beth-shemesh, and stopped there. A large stone was there; so they split up the wood of the cart and offered the cows as a burnt-offering to the Lord. 15The Levites took down the ark of the Lord and the box that was beside it, in which were the gold objects, and set them upon the large stone. Then the people of Beth-shemesh offered burnt-offerings and presented sacrifices on that day to the Lord. 16When the five lords of the Philistines saw it, they returned that day to Ekron.

This reads as a primitive sort of story, yet there is real subtlety in the provisions made for having offended a God. You have to acknowledge your own authority (the number five stands for the number of Philistine leaders) and the authority of the God (the mice and the tumours stand for the power of Israel’s God); in other words you have to take specific responsibility for the offence and admit its destructive consequences for your own people.

So who is primitive-Philistine society then, or our society now? Both church and state make murderous mistakes which must offend God but are more careless than the Philistines. Did the Pope ever take proper responsibility for extensive child-abuse by priests? No he did not although his number was on it just as surely as that of the five Philistine leaders was on their offence. Have George Bush Tony Blair and their teams ever taken full responsibility for the devastation of Iraq? No they have not, but engaged in miserable excuses. And in neither of these cases has there been any acknowledgment at all of the damage done to church and society by offending God in these ways. Come to think of it, their disgraceful response is exactly like mine when I’m caught out in offensive behaviour. I move on as fast as I can without specific confession or repentance, as the Burmese Junta and those who have supported it are doing.

22Now the festival of Unleavened Bread, which is called the Passover, was near. 2The chief priests and the scribes were looking for a way to put Jesus to death, for they were afraid of the people.

3 Then Satan entered into Judas called Iscariot, who was one of the twelve; 4he went away and conferred with the chief priests and officers of the temple police about how he might betray him to them. 5They were greatly pleased and agreed to give him money. 6So he consented and began to look for an opportunity to betray him to them when no crowd was present.

7 Then came the day of Unleavened Bread, on which the Passover lamb had to be sacrificed. 8So Jesus sent Peter and John, saying, ‘Go and prepare the Passover meal for us that we may eat it.’ 9They asked him, ‘Where do you want us to make preparations for it?’ 10‘Listen,’ he said to them, ‘when you have entered the city, a man carrying a jar of water will meet you; follow him into the house he enters 11and say to the owner of the house, “The teacher asks you, ‘Where is the guest room, where I may eat the Passover with my disciples?’ ” 12He will show you a large room upstairs, already furnished. Make preparations for us there.’ 13So they went and found everything as he had told them; and they prepared the Passover meal. 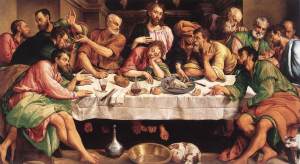 This too is a primitive sort of story in that we have to listen to a traditional story-teller’s way of letting us know what’s going on. The Evil One finds a house in Judas and the chief priests, a house which is a place of corruption and murder. The Holy One (Jesus) also finds a house which is a place of hospitality, faith, and of self-sacrifice which will lead people out of slavery. (Although Luke does not identify Jesus with the Passover lamb, the hint is there. The lamb whose blood told the angel of death to pass over the people, who were then free from slavery, is matched by Jesus who on the cross leads a new exodus from the power of evil.) But the two houses are important, emphasising that both evil and good come to dwell in people and create communities. Luke tells us that even as, or should I say especially as, Jesus prepares for his lonely sacrifice he establishes his dwelling amongst his followers and for his followers. At the same point in the same story, John’s gospel has Jesus say, “Abide in me, as I in you.”

My most dismaying discoveries about myself have been of the extent to which wrongness has made its home in me, unrecognised and unchallenged. My most heartening discoveries have been how the church community has been my house of goodness; and how sometimes Jesus has managed to sneak past my defences to live in me.