This blog provides a meditation on the Episcopal daily readings along with a headline from world news.

17 Samuel summoned the people to the Lord at Mizpah 18and said to them, ‘Thus says the Lord, the God of Israel, “I brought up Israel out of Egypt, and I rescued you from the hand of the Egyptians and from the hand of all the kingdoms that were oppressing you.” 19But today you have rejected your God, who saves you from all your calamities and your distresses; and you have said, “No! but set a king over us.” Now therefore present yourselves before the Lord by your tribes and by your clans.’

20 Then Samuel brought all the tribes of Israel near, and the tribe of Benjamin was taken by lot. 21He brought the tribe of Benjamin near by its families, and the family of the Matrites was taken by lot. Finally he brought the family of the Matrites near man by man, and Saul the son of Kish was taken by lot. But when they sought him, he could not be found. 22So they inquired again of the Lord, ‘Did the man come here?’ and the Lord said, ‘See, he has hidden himself among the baggage.’ 23Then they ran and brought him from there. When he took his stand among the people, he was head and shoulders taller than any of them. 24Samuel said to all the people, ‘Do you see the one whom the Lord has chosen? There is no one like him among all the people.’ And all the people shouted, ‘Long live the king!’

25 Samuel told the people the rights and duties of the kingship; and he wrote them in a book and laid it up before the Lord. Then Samuel sent all the people back to their homes. 26Saul also went to his home at Gibeah, and with him went warriors whose hearts God had touched. 27But some worthless fellows said, ‘How can this man save us?’ They despised him and brought him no present. But he held his peace. 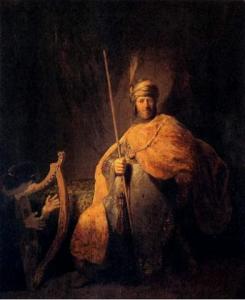 Saul and David: the ambiguity of kingship

Here in this passage the two competing theologies of monarchy can be seen; on the one hand, it is an insult to God the king; on the other, kings are chosen by God. Saul’s modesty in hiding himself is considered exemplary: he is not pushing his own election. It is made clear that government is not simply an assertion of human power. The ruler has “rights and duties” which limit personal power, albeit Samuel’s prophetic warning about the unruliness of kings still stands in the background. Jewish reflection on monarchy and rule took place over hundreds of years, with the old texts being edited again and again to incorporate new recognitions while the older ones were not erased. On the whole its conclusions are pessimistic-although there are a few decent kings, in the main they forget their duty and plunder the people or worship false Gods. Nevertheless it also holds out the hope that any ruler may advance the  rule of God. The Christian perception is that the only person who ever fully represented the “rule which does not come from this world” was crucified in this world. The Christian inheritance encourages scepticism about worldly power, while retaining the hope that the crucified messiah may rule the lives of people and communities if not of nations.

52Then Jesus said to the chief priests, the officers of the temple police, and the elders who had come for him, ‘Have you come out with swords and clubs as if I were a bandit? 53When I was with you day after day in the temple, you did not lay hands on me. But this is your hour, and the power of darkness!’

54 Then they seized him and led him away, bringing him into the high priest’s house. But Peter was following at a distance. 55When they had kindled a fire in the middle of the courtyard and sat down together, Peter sat among them. 56Then a servant-girl, seeing him in the firelight, stared at him and said, ‘This man also was with him.’ 57But he denied it, saying, ‘Woman, I do not know him.’ 58A little later someone else, on seeing him, said, ‘You also are one of them.’ But Peter said, ‘Man, I am not!’ 59Then about an hour later yet another kept insisting, ‘Surely this man also was with him; for he is a Galilean.’ 60But Peter said, ‘Man, I do not know what you are talking about!’ At that moment, while he was still speaking, the cock crowed. 61The Lord turned and looked at Peter. Then Peter remembered the word of the Lord, how he had said to him, ‘Before the cock crows today, you will deny me three times.’ 62And he went out and wept bitterly.

Peter's denial: when good people do nothing

The just and peaceful man asks the question, “Have you come out with swords and clubs as if I were a bandit?” The powers of darkness are evident in the gross brutality of the religious leaders who fear the power of goodness. In this Gospel the powers of darkness are thoroughly demythologised. They are not superhuman forces on high but religious arrogance, political convenience, blind stupidity, unquestioning obedience to orders, casual cruelty-and the fear which leads good people to do nothing and to betray what they believe. Those who take upon themselves the “rule which does not come from this world,” often do the simple right things that many in their hearts know ought to be done. In Jesus’ case this is his refusal to deny the rule of God or his own mission.

We may be powerless to effect the will of God but we can refuse to deny it for the comfort of the powerful or for our own welfare.