This blog provides a meditation on the Episcopal daily readings along with a headline from world news:
40 protesters killed across Syria

Revelation 7:9-17
9 After this I looked, and there was a great multitude that no one could count, from every nation, from all tribes and peoples and languages, standing before the throne and before the Lamb, robed in white, with palm branches in their hands. 10They cried out in a loud voice, saying,
‘Salvation belongs to our God who is seated on the throne, and to the Lamb!’
11And all the angels stood around the throne and around the elders and the four living creatures, and they fell on their faces before the throne and worshipped God, 12singing,
‘Amen! Blessing and glory and wisdom
and thanksgiving and honour
and power and might
be to our God for ever and ever! Amen.’
13 Then one of the elders addressed me, saying, ‘Who are these, robed in white, and where have they come from?’ 14I said to him, ‘Sir, you are the one that knows.’ Then he said to me, ‘These are they who have come out of the great ordeal; they have washed their robes and made them white in the blood of the Lamb.
15 For this reason they are before the throne of God,
and worship him day and night within his temple,
and the one who is seated on the throne will shelter them.
16 They will hunger no more, and thirst no more;
the sun will not strike them,
nor any scorching heat;
17 for the Lamb at the centre of the throne will be their shepherd,
and he will guide them to springs of the water of life,
and God will wipe away every tear from their eyes.’
………………………………

This is one of the most daring imaginations of the Bible. The people are the persecuted believers of all races- we should not imagine it, although the author probably did, as being limited to people of Christian faith, but inclusive of the Jews of the Holocaust, the Buddhists of Tibet and Pol Pot’s Cambodia, the Moslems of Bosnia, indeed all who have tried to stand for goodness in the face of violence. We should believe that the Lamb claims as his own all who act and suffer in his spirit. They are robed as holy and hold the palms of victory because they have suffered with the Lamb.
They share the goodness of God in whom there is overflowing life forever. And then the author gives us one of the most astonishing images in the Bible: God himself, like a mother with her hurt child, will wipe away all the tears from their eyes. There is no greater image of the omnipotence of God than this: that for each child he/she will make everything all right. It’s important to say that this neither diminishes nor negates their suffering; the tears and the comfort are both real; and their costly stand against destructive evil is confirmed. The message is not pie in the sky when you die, but encouragement to struggle for goodness, even against overwhelming odds. The passage retains its capacity to inspire.
………………………
Matthew 13:31-35
31 He put before them another parable: ‘The kingdom of heaven is like a mustard seed that someone took and sowed in his field; 32it is the smallest of all the seeds, but when it has grown it is the greatest of shrubs and becomes a tree, so that the birds of the air come and make nests in its branches.’
33 He told them another parable: ‘The kingdom of heaven is like yeast that a woman took and mixed in with three measures of flour until all of it was leavened.’
34 Jesus told the crowds all these things in parables; without a parable he told them nothing. 35This was to fulfil what had been spoken through the prophet:
‘I will open my mouth to speak in parables;
I will proclaim what has been hidden from the foundation of the world.’ 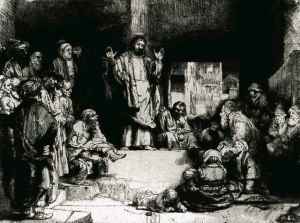 ……………………..
These images of God’s rule on earth show its paradoxical nature: it is present in the world but in the form of a seed in the ground or a pinch of yeast in the dough. It starts small because it requires the consent of people; it gains allegiance amongst the small people of small villages in one of the smallest nations in the world. It manifests itself by tiny miracles of life: a prostitute forgiven; a leper healed; a foreigner’s daughter cured; a prophet crucified. It persuades by goodness. It’s the real thing.