On the lip of catastrophe

14 Blessed are those who wash their robes, so that they will have the right to the tree of life and may enter the city by the gates. 15Outside are the dogs and sorcerers and fornicators and murderers and idolaters, and everyone who loves and practises falsehood.

16 ‘It is I, Jesus, who sent my angel to you with this testimony for the churches. I am the root and the descendant of David, the bright morning star.’

And let everyone who hears say, ‘Come.’

And let everyone who is thirsty come.

Let anyone who wishes take the water of life as a gift.

20 The one who testifies to these things says, ‘Surely I am coming soon.’

21 The grace of the Lord Jesus be with all the saints. Amen. 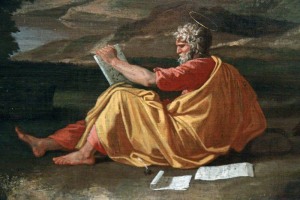 The exiled prophet writing his book

Washing one’s robes (in the blood of the Lamb) is to suffer for one’s commitment to the Lamb. I guess the writer would have meant Christian believers but I would extend it to all who are committed to the character of the Lamb in thought and deed.

Outside the city….it’s always been a temptation for those who have suffered to get into the city to imagine they know who’s left outside. Calvin thought he could tell by looking out of his window at behaviour on the streets of Geneva. Those who are left out will be those who don’t want to come in, those who prefer their fornication to the love of God and neighbour, their killing to the life-giving God. It’s better to say that there will be many fornicators, idolaters and liars IN the city, drawn by love of the Lamb and liberation from their sin.

“Surely I am coming soon..” We are helpless in the face of this promise as we don’t know how to interpret it except it means hope for a hopeless world and life for the dead. With that in mind we can still pray “Amen. Come, Lord Jesus.”

21 Then Peter came and said to him, ‘Lord, if another member of the church sins against me, how often should I forgive? As many as seven times?’ 22Jesus said to him, ‘Not seven times, but, I tell you, seventy-seven times.

23 ‘For this reason the kingdom of heaven may be compared to a king who wished to settle accounts with his slaves. 24When he began the reckoning, one who owed him ten thousand talents was brought to him; 25and, as he could not pay, his lord ordered him to be sold, together with his wife and children and all his possessions, and payment to be made. 26So the slave fell on his knees before him, saying, “Have patience with me, and I will pay you everything.” 27And out of pity for him, the lord of that slave released him and forgave him the debt. 28But that same slave, as he went out, came upon one of his fellow-slaves who owed him a hundred denarii; and seizing him by the throat, he said, “Pay what you owe.” 29Then his fellow-slave fell down and pleaded with him, “Have patience with me, and I will pay you.” 30But he refused; then he went and threw him into prison until he should pay the debt. 31When his fellow-slaves saw what had happened, they were greatly distressed, and they went and reported to their lord all that had taken place. 32Then his lord summoned him and said to him, “You wicked slave! I forgave you all that debt because you pleaded with me. 33Should you not have had mercy on your fellow-slave, as I had mercy on you?” And in anger his lord handed him over to be tortured until he should pay his entire debt. 35So my heavenly Father will also do to every one of you, if you do not forgive your brother or sister from your heart.’

The only difficulty with this passage is our desire to avoid the obvious meaning: there is only one act of forgiveness which is directed by God to us and transmitted by us to those who’ve done wrong to us. If we don’t transmit it we haven’t received it but have chosen to be judged by the rigour of the law. If that’s what we choose, that’s what we’ll get, says Jesus. 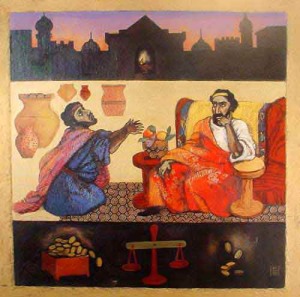 image of this parable from Kazakhstan

The heart of the parable is a terrible seriousness but its details are full of the robust humour we should associate with Jesus. Ten thousand talents is at least a million pounds-how on earth did the debt get so high? Surely the lord was a bit careless? And the threat to sell the whole family-such things did happen but this lord is as sharp with his penalty as he is with his compassion. Seizing him by the throat-there’s a kind of Tom and Jerry violence in the parable. The conclusion, that God gives us the justice we give to others, is profoundly dismaying, even if it’s couched in the same knockabout language. The humour seduces us into admitting that God would be quite right to treat us this way. After all it’s precisely what we pray for in the Lord’s Prayer:

“Forgive us our debts as we forgive our debtors.”

Tags: forgiveness, getting what we ask for, In / out of the Holy City