BRADLEY MANNING A ENEMY OF THE STATE? 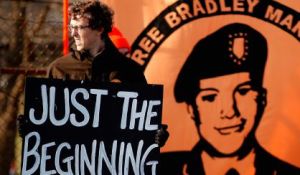 accused of spilling the US beans

9 Thus says the Lord of hosts: Let your hands be strong—you that have recently been hearing these words from the mouths of the prophets who were present when the foundation was laid for the rebuilding of the temple, the house of the Lord of hosts. 10For before those days there were no wages for people or for animals, nor was there any safety from the foe for those who went out or came in, and I set them all against one another. 11But now I will not deal with the remnant of this people as in the former days, says the Lord of hosts. 12For there shall be a sowing of peace; the vine shall yield its fruit, the ground shall give its produce, and the skies shall give their dew; and I will cause the remnant of this people to possess all these things. 13Just as you have been a cursing among the nations, O house of Judah and house of Israel, so I will save you and you shall be a blessing. Do not be afraid, but let your hands be strong.

14 For thus says the Lord of hosts: Just as I purposed to bring disaster upon you, when your ancestors provoked me to wrath, and I did not relent, says the Lord of hosts, 15so again I have purposed in these days to do good to Jerusalem and to the house of Judah; do not be afraid. 16These are the things that you shall do: Speak the truth to one another, render in your gates judgements that are true and make for peace, 17do not devise evil in your hearts against one another, and love no false oath; for all these are things that I hate, says the Lord.

The greatest of the Lord’s blessings on a nation are that its people speak the truth and administer true justice that makes for peace. At a time when the leader of a U.K. government which has scorned the poor co-opts the Bible in support of his view of society (David Cameron yesterday), British citizens might pray for the blessing of truth. Another great prophet Isaiah said “Truth has fallen in the public square and no-one helps her up.” The Levesen Enquiry into the popular press in the UK has revealed a predatory journalism which will do anything to sell newspapers and hardly anything to discover the truth. Simone Weil, the great French thinker proposed a new crime of “misleading the public” which would have serious penalties attached.

When people live in a media- drenched apathy with  only the vaguest notion of what is going on in the world, there is cause for alarm. Those who speak truth (as Christopher Hitchens, the writer who died yesterday, tried to do) are dismissed as immoderate and unbalanced. William Lloyd Garrison, the American anti-slavery agitator whom the Church remembers today suffered from this same criticism:

-In 1831, Garrison returned to New England and founded a weekly anti-slavery newspaper of his own, The Liberator. In the first issue, Garrison stated:

“I am aware that many object to the severity of my language; but is there not cause for severity? I will be as harsh as truth, and as uncompromising as justice. On this subject, I do not wish to think, or to speak, or write, with moderation. No! no! Tell a man whose house is on fire to give a moderate alarm; tell him to moderately rescue his wife from the hands of the ravisher; tell the mother to gradually extricate her babe from the fire into which it has fallen; – but urge me not to use moderation in a cause like the present. I am in earnest – I will not equivocate – I will not excuse – I will not retreat a single inch – AND I WILL BE HEARD. The apathy of the people is enough to make every statue leap from its pedestal, and to hasten the resurrection of the dead.” 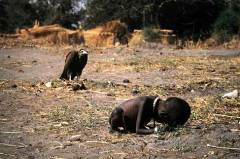 When the Son of Man (Jesus and his disciples) come finally to rule the world, they reveal that they have come many times already in the least important of their brothers and sisters. Two things about Jesus’ savage parable should be noted:

1. It is directed first of all to “nations”, that is, whole societies, which are judged as to how they have treated the most vulnerable citizens. A society that permits the routine abuse of demented patients in hospital and saves money by hassling cancer patients to go back to work (UK this week), should tremble. Of course the message applies to individuals as well

2.Those who show compassions to those in need don’t know they are doing it for Jesus: they do it out of human compassion. The righteous are not looking sideways when they help someone-oh goody if I help this prisoner I’ll be helping Jesus-they just see the need and respond.

Christopher Hitchens, with his hatred of “religion” as a divisive force amongst humanity might have liked this parable.