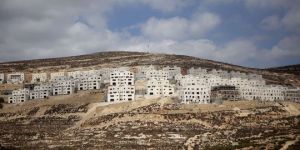 8 The Lord said to Moses and Aaron,9‘When Pharaoh says to you, “Perform a wonder”, then you shall say to Aaron, “Take your staff and throw it down before Pharaoh, and it will become a snake.” ’10So Moses and Aaron went to Pharaoh and did as the Lord had commanded; Aaron threw down his staff before Pharaoh and his officials, and it became a snake.11Then Pharaoh summoned the wise men and the sorcerers; and they also, the magicians of Egypt, did the same by their secret arts.12Each one threw down his staff, and they became snakes; but Aaron’s staff swallowed up theirs.13Still Pharaoh’s heart was hardened, and he would not listen to them, as the Lord had said.

14 Then the Lord said to Moses, ‘Pharaoh’s heart is hardened; he refuses to let the people go.15Go to Pharaoh in the morning, as he is going out to the water; stand by at the river bank to meet him, and take in your hand the staff that was turned into a snake.16Say to him, “The Lord, the God of the Hebrews, sent me to you to say, ‘Let my people go, so that they may worship me in the wilderness.’ But until now you have not listened.17Thus says the Lord, ‘By this you shall know that I am the Lord.’ See, with the staff that is in my hand I will strike the water that is in the Nile, and it shall be turned to blood.18The fish in the river shall die, the river itself shall stink, and the Egyptians shall be unable to drink water from the Nile.” ’19The Lord said to Moses, ‘Say to Aaron, “Take your staff and stretch out your hand over the waters of Egypt—over its rivers, its canals, and its ponds, and all its pools of water—so that they may become blood; and there shall be blood throughout the whole land of Egypt, even in vessels of wood and in vessels of stone.” ’

20 Moses and Aaron did just as the Lord commanded. In the sight of Pharaoh and of his officials he lifted up the staff and struck the water in the river, and all the water in the river was turned into blood,21and the fish in the river died. The river stank so that the Egyptians could not drink its water, and there was blood throughout the whole land of Egypt.22But the magicians of Egypt did the same by their secret arts; so Pharaoh’s heart remained hardened, and he would not listen to them, as the Lord had said.23Pharaoh turned and went into his house, and he did not take even this to heart.24And all the Egyptians had to dig along the Nile for water to drink, for they could not drink the water of the river.

The point about this is not that the story is full of improbable miracles but that it’s not a very good story. Even in terms of the kind of competitive “anything you can do we can do as well” plot of the story, the reaction of Pharaoh is a bit inept. Why does he not recognise Moses as a danger? Because his heart is hardened. Well, OK why doesn’t he stick him in jail or have him killed? The answer to that is that if he’d done so the story would be shorter and we wouldn’t have all the plagues of Egypt to enjoy.  I don’t grudge the story-teller his fun, but who has not found the plague narrative too long and repetitive? It uses the same motif of Pharaoh’s hardened heart again and again and again. Perhaps the comedy of the plagues is meant to balance the genuine horror of the angel of death but their fairy tale gusto is a poor image of the “strong hand and the mighty arm” of the traditional summary of God’s rescue. That said, I can imagine a cartoon style movie or comic book which made good use of this material. Maybe that’s the point: to turn a tyrant into a joke.

10He left that place and went to the region of Judea and* beyond the Jordan. And crowds again gathered around him; and, as was his custom, he again taught them.

2 Some Pharisees came, and to test him they asked, ‘Is it lawful for a man to divorce his wife?’3He answered them, ‘What did Moses command you?’4They said, ‘Moses allowed a man to write a certificate of dismissal and to divorce her.’5But Jesus said to them, ‘Because of your hardness of heart he wrote this commandment for you.6But from the beginning of creation, “God made them male and female.”7“For this reason a man shall leave his father and mother and be joined to his wife,*8and the two shall become one flesh.” So they are no longer two, but one flesh.9Therefore what God has joined together, let no one separate.’

13 People were bringing little children to him in order that he might touch them; and the disciples spoke sternly to them.14But when Jesus saw this, he was indignant and said to them, ‘Let the little children come to me; do not stop them; for it is to such as these that the kingdom of God belongs.15Truly I tell you, whoever does not receive the kingdom of God as a little child will never enter it.’16And he took them up in his arms, laid his hands on them, and blessed them. 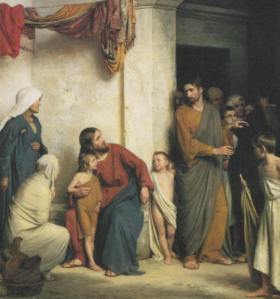 The previous section of the Gospel (see yesterday’s blog 695), showed Jesus’ concern for the little ones, those who have no rights and are disregarded by the important people. In this section Mark shows Jesus acting decisively in defence of two such groups: women and children.

Jewish marriage law was biased towards men so that a woman could be divorced on almost any pretext (although the offence caused to her family probably prevented the free use of this right) and she could be dismisssed without any means of support except that of her own people. Jesus describes this right as proceeding from “hardness of heart”, the same brutal stubborness shown by Pharaoh. Moses, Jesus explains, recognised that without a writ of divorce women could be even more disadvantaged, so permitted men to dismiss them legally. God’s plan shown in the beginning, in the act of creation was quite otherwise according to Jesus. The sexual act means the whole-hearted belonging together of a man and a woman, a unity which cannot then be dissolved at the whim of either partner. This robust teaching which challenges “hard-heartedness” in men (and women) is,  interestingly, one which most objectors to same-sex marriage have long ignored so that people who have ignored Jesus’ explicit condemnation of divorce use the same teaching to condemn homosexual marriage. My Church permits the remarriage of divorced people on the grounds that repentance requires rather than forbids a new start. I don’t know that Jesus would agree with this reasoning. If we’re going to disobey Jesus’ teaching, let’s do so honestly, stating clearly that he seems not to have considered physical or sexual abuse, persistent unfaithfulness, complete breakdown with couples living apart, and so on. Or perhaps he did, but was content to leave his followers with a clear image of the creator’s intention.

Jesus’ anger is also recorded against those who consider children are not part of the serious business of religion. He is not sentimental-he doesn’t welcome them because they’re cute but because God’s rule belongs to them. The gracious, wise and holy way of God surely belongs to those who are ready to learn. In fact, it only belongs to those who are ready to learn, Jesus says: those who imagine they’ve nothing to learn cannot be part of God’s rule. Jesus softens one of the most persistent of social distinctions, that between children and adults. Children should be taken as seriously as adults; adults should take themselves as unseriously as children. I’ve always enjoyed the life of communities which practiced this teaching of Jesus.

Tags: Jesus and the little children; rivers of blood, marraige between man and woman