Why no sanctions now?

23he said to them, ‘This is what the Lord has commanded: “Tomorrow is a day of solemn rest, a holy sabbath to the Lord; bake what you want to bake and boil what you want to boil, and all that is left over put aside to be kept until morning.” ’24So they put it aside until morning, as Moses commanded them; and it did not become foul, and there were no worms in it.25Moses said, ‘Eat it today, for today is a sabbath to the Lord; today you will not find it in the field.26For six days you shall gather it; but on the seventh day, which is a sabbath, there will be none.’

27 On the seventh day some of the people went out to gather, and they found none.28The Lord said to Moses, ‘How long will you refuse to keep my commandments and instructions?29See! The Lord has given you the sabbath, therefore on the sixth day he gives you food for two days; each of you stay where you are; do not leave your place on the seventh day.’30So the people rested on the seventh day.

The command to observe the Sabbath appears in the “ten words” of Exodus 20, but here it is shown as already observed amongst the Israelites. The weekly day of rest had become so much an identifier of the people by the time the book of Exodus was edited, that it was retrospectively attached even to the earliest days of the desert wanderings. The belief that each week must include not only time for all the responsibilities of human life but also for its joys, including its joy in God and each other, is one of the great possessions of humanity. It is “the last of days for which the first was made”  in other words the purpose and climax of creation. The grim image of the Sabbath popularised by Calvinist Christians in places like Scotland is an utter travesty of the liberating institution observed by Israel by which even domesticated animals are given a rest  from work. This gift of God’s freedom for all is something that the editors  of this story wanted to include in the things taught by God to his people in the wilderness. Only a people who observe this day are worthy of having a land.

16‘I have said these things to you to keep you from stumbling.2They will put you out of the synagogues. Indeed, an hour is coming when those who kill you will think that by doing so they are offering worship to God.3And they will do this because they have not known the Father or me.4But I have said these things to you so that when their hour comes you may remember that I told you about them.

The Work of the Spirit

‘I did not say these things to you from the beginning, because I was with you.5But now I am going to him who sent me; yet none of you asks me, “Where are you going?”6But because I have said these things to you, sorrow has filled your hearts.7Nevertheless, I tell you the truth: it is to your advantage that I go away, for if I do not go away, the Advocate* will not come to you; but if I go, I will send him to you.8And when he comes, he will prove the world wrong about* sin and righteousness and judgement:9about sin, because they do not believe in me;10about righteousness, because I am going to the Father and you will see me no longer;11about judgement, because the ruler of this world has been condemned. 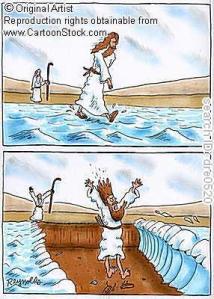 Scholars have debated whether the “Advocate” mentioned in John’s Gospel is the same as the Holy Spirit in the book of the Acts and the Letters of Paul. There are similarities: both take over some of the functions of Jesus earthly ministry, specifically teaching and encouraging the disciples; but the Advocate is not, like the Spirit, associated with a healing ministry. For John and his community of believers, the Advocate was a witness to the truth of God’s love in Jesus and a revealer of the fullmeaning of Jesus’ life and words. Here it’s said that the Advocate will expose worldly people as in error about sin and rightouesness because they thought Jesus was sinful and they were rightoues, but as Jesus has gone to be with God, they are shown to be wrong about both, and already under judgement with the ruler of this world, because the light came into the world and people preferred darkness. We should note that the Advocate reinforces the astonishing conviction of the believers that Jesus’ execution on the cross is his way to God.  As always John’s gospel insists that deliverance from evil depends on a person’s attitude to Jesus as the bearer of the Father’s love for the world. This kind of faith may seem narrow in a multi-faith society. Christians must be clear: it’s not in spite of Jesus that we welcome such a society; it is through Jesus, who is the bearer of God’s inclusive love for people of all religions and none. Jesus does not enter a beauty contest against the Buddha, Guru Nanak, Moses and Mohammed (peace upon all of them, and even Richard Dawkins!) but is delighted to share his truth with them and to receive theirs.