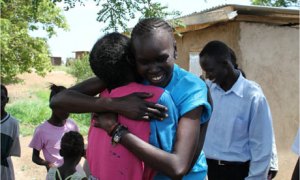 You have seen, O Lord; do not be silent!    O Lord, do not be far from me!
23 Wake up! Bestir yourself for my defence,    for my cause, my God and my Lord!
24 Vindicate me, O Lord, my God,    according to your righteousness,    and do not let them rejoice over me.
25 Do not let them say to themselves,    ‘Aha, we have our heart’s desire.’
Do not let them say, ‘We have swallowed you* up.’
26 Let all those who rejoice at my calamity    be put to shame and confusion;
let those who exalt themselves against me    be clothed with shame and dishonour.
27 Let those who desire my vindication    shout for joy and be glad,    and say evermore,
‘Great is the Lord,    who delights in the welfare of his servant.’
28 Then my tongue shall tell of your righteousness    and of your praise all day long.

The voice of an oppressed person who knows that he/she is suffering injustice sounds foreign to people who live in relative affluence, but it is known intimately by the millions of people in the world who live in poverty or under tyranny. What strikes affluent people as most foreign is that the oppressed person has no doubts about their own rightness: the experience of unjust suffering leaves no room for doubt. The Edith Hamilton translation of the Greek tragedy “Prometheus Bound” ends with the righteous victim calling heaven and earth to witness, “Behold me, I am wronged!”

Such a voice holds God to account. It says, in effect, that God is only any use if He can somehow save the vitim and put the oppressor to shame. As God does not act directly in the world, it is clear that his reputation is the hands of believers whom he asks, on his behalf, to rescue victims and shame oppressors. Nothing is more important than this task and no church is excused by its strength, weakness, ethnicity,  theology or laziness from carrying it out.

But as all their interventions are insufficient to rescue all victims and put down all oppressors, believers should lobby the secular governments to restrain evil where they can. Beyond all attempts to establish justice believers have the duty to proclaim the coming of God’s rule on earth and the immediacy of His judgment in heaven and hell.

The Passover with the Disciples

17 On the first day of Unleavened Bread the disciples came to Jesus, saying, ‘Where do you want us to make the preparations for you to eat the Passover?’18He said, ‘Go into the city to a certain man, and say to him, “The Teacher says, My time is near; I will keep the Passover at your house with my disciples.” ’19So the disciples did as Jesus had directed them, and they prepared the Passover meal.

20 When it was evening, he took his place with the twelve;*21and while they were eating, he said, ‘Truly I tell you, one of you will betray me.’22And they became greatly distressed and began to say to him one after another, ‘Surely not I, Lord?’23He answered, ‘The one who has dipped his hand into the bowl with me will betray me.24The Son of Man goes as it is written of him, but woe to that one by whom the Son of Man is betrayed! It would have been better for that one not to have been born.’25Judas, who betrayed him, said, ‘Surely not I, Rabbi?’ He replied, ‘You have said so.’

Passover is the great Jewish feast of liberation: God hears the cry of the oppressed and prepares to vindicate their cause by setting them free from oppression in Egypt. The fact that many Jewish people can celebrate the feast while oppressing Palestinian people does not invalidate its meaning. Jesus valued the feast and re-interpreted it for his followers by encouraging them to see his death as a new covenenant between human beings and God and his resurrection as a new exodus to freedom. This reinterpretation sould not be seen as spiritualising the passover into a holy communion that is only to do with individual salvation but rather as establishing holy communion as the feast of comprehensive liberation: personal, communal, political and universal.

I never share in holy communion without remembering the response of thefirst disciples and asking for myself, “Surely not I, Lord”-and receiving the answer from the Lord that he knows my small and large betrayals, my fear and my disloyalty, and offers me the chance to keep changing my life, trusting the gospel and doing the tasks of justice. It’s only when I refuse this offer that I put myself in the place of Judas.