This blog provides a meditation on the daily readings of the Episcopal Church along with a headline from world news: 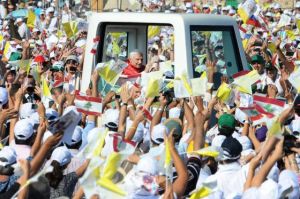 40And the Lord said to Job:

41*‘Can you draw out Leviathan* with a fish-hook,    or press down its tongue with a cord?
2 Can you put a rope in its nose,    or pierce its jaw with a hook?
3 Will it make many supplications to you?    Will it speak soft words to you?
4 Will it make a covenant with you    to be taken as your servant for ever?
5 Will you play with it as with a bird,    or will you put it on a leash for your girls?
6 Will traders bargain over it?    Will they divide it up among the merchants?
7 Can you fill its skin with harpoons,    or its head with fishing-spears?
8 Lay hands on it; think of the battle; you will not do it again!
9 *Any hope of capturing it* will be disappointed;    were not even the gods* overwhelmed at the sight of it?
10 No one is so fierce as to dare to stir it up.    Who can stand before it?*
11 Who can confront it* and be safe?*    —under the whole heaven, who?* 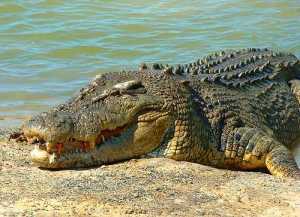 As with the hippopotamus (see Blog 836 yesterday) , this speech draws attention to God’s creation of mighty animals whose strength is greater than that of human beings and who are infintely strange to them, but made and loved by God.” What is the “purpose” of such creatures?” is God’s implicit question to Job who has demanded that God should be comprehensible to him. Just a quick look round with open eyes, God suggests, shoud be enough to dispel that notion: nature itself and its processes are beyond human understanding, not because people know little about them but rather that the more they know the more mysterious they seem. God’s questions to Job are not answered by modern science which continually reveals more and more wonders to our minds. The recent revelations about the functions of DNA in human beings point up the astonishing complexity of our genome which remains a source of wonder even as we decode its patterns. Those of us who believe in a creator God are encouraged to see that as we read the book of life along with scientists we find ever more reasons to worship. (If it’s beyond our capacity to state the “purpose” of a crocodile, how about the Scottish midge??)

The Plot to Kill Lazarus

9 When the great crowd of the Jews learned that he was there, they came not only because of Jesus but also to see Lazarus, whom he had raised from the dead.10So the chief priests planned to put Lazarus to death as well,11since it was on account of him that many of the Jews were deserting and were believing in Jesus.<!– 12 –>

12 The next day the great crowd that had come to the festival heard that Jesus was coming to Jerusalem.13So they took branches of palm trees and went out to meet him, shouting,
‘Hosanna!
Blessed is the one who comes in the name of the Lord—    the King of Israel!’
14Jesus found a young donkey and sat on it; as it is written:
15 ‘Do not be afraid, daughter of Zion.
Look, your king is coming,    sitting on a donkey’s colt!’
16His disciples did not understand these things at first; but when Jesus was glorified, then they remembered that these things had been written of him and had been done to him.17So the crowd that had been with him when he called Lazarus out of the tomb and raised him from the dead continued to testify.*18It was also because they heard that he had performed this sign that the crowd went to meet him.19The Pharisees then said to one another, ‘You see, you can do nothing. Look, the world has gone after him!’ 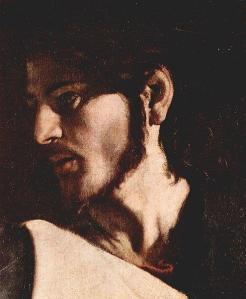 Caravaggio’s Christ: the inexorable will to rescue the world

The way John tells the story we have:

1. Jesus’ raising of Lazarus, his friend from death. By coming to give him life he puts his own life at risk. John is telling us that in order to give life to humanity Jesus will go to his cross.

2. Jesus is anoiunted by Mary as Messiah but also as one about to die.

3. Jesus enters Jerusalem knowing that this is the place where he will be arrested and killed but he does so as the true Messiah and King of his people prophesied by Zechariah.

4. The pharisees note that “the world has gone after him” because he has given life to the dead Lazarus.

The purpose of this story-telling is to show the links in the iron chain of salvation forged by God and his Son Jesus which will bring life to humanity. Nothing of what human beings think of as their own plans, neither the hopeful plans of disciples nor the murderous plans of Pharisees can escape being incorporated into the will of God expressed by Jesus. The reality (John’s word aletheia= “unveiledness”) of the world is forever the inexorable will of God that it should be rescued from evil and death.

Tags: God of crocodiles, life for the world, the iron chain of salvation