On a beautiful clear Boxing Day in Dundee, Scotland, I’m at my desk looking at the Episcopal reading for the day.

Headline of the day: Egyptian women cut their hair as protest against imposition of Islamic law 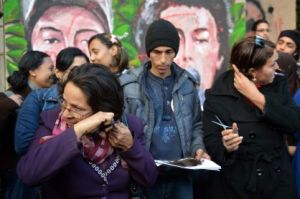 59While they were stoning Stephen, he prayed, ‘Lord Jesus, receive my spirit.’60Then he knelt down and cried out in a loud voice, ‘Lord, do not hold this sin against them.’ When he had said this, he died.*81And Saul approved of their killing him.

That day a severe persecution began against the church in Jerusalem, and all except the apostles were scattered throughout the countryside of Judea and Samaria.2Devout men buried Stephen and made loud lamentation over him.3But Saul was ravaging the church by entering house after house; dragging off both men and women, he committed them to prison.<!– 4 –>

4 Now those who were scattered went from place to place, proclaiming the word.5Philip went down to the city* of Samaria and proclaimed the Messiah* to them.6The crowds with one accord listened eagerly to what was said by Philip, hearing and seeing the signs that he did,7for unclean spirits, crying with loud shrieks, came out of many who were possessed; and many others who were paralysed or lame were cured.8So there was great joy in that city. 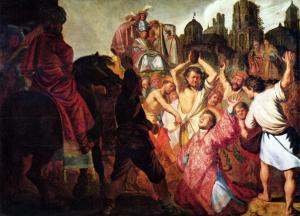 The selected passage is full of irony. Stephen is killed by his fellow Jews because he suggests that God is by-passing the chosen people who have persistently rejected his prophets and have now rejected his Messiah, and is working through the disciples of Jesus. His death is immediately followed by evidence that God is working through Jesus’ disciples. It is also followed by a furious persecution led by the young orthodox ultra, Saul, whose violence to Jesus’ people will result in his own conversion to the way of Jesus. The persecution also scatters the disciples who therefore can spread the word further afield, as Philip does in Samaria. Luke wants to suggest that those who imagine they are in charge of events are self-deceived and that beyond the plans of human beings, God’s wisdom prevails.

Today there is a report that after Government forces in Syria carried out successful, brutal assaults where there seemed to be any support for the rebels, a high-ranking commander, disgusted by their cruelty, has defected to the rebel cause. 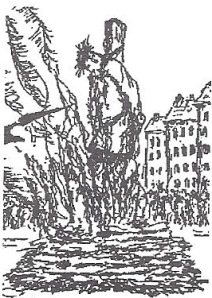 Here is a clear warning against the kind of religious intolerance that has torn communities apart from Beirut to Belfast; and permitted political forces to use religion as a recruiting agent. Luke was writing as part of a church that knew persecution both from orthodox Judaism and from Roman government. When that church became itself the state religion of the Roman empire its sensitivity to the evils of persecution diminished to the extent that it was soon persecuting minorities even within its own faith. The story of Christianity in this regard is no more admirable than that of many other religions and less admirable than say, Jainism and Sufism. Given the origins of Christian faith in the crucified Jesus and the persecuted early church, it’s imporatant to ask how this religion could ever justify intolerance and sectarian murder. I include in that term the judicial murder of “heretics” such as that of Michael Servetus executed in Calvin’s Geneva for denying the doctrine of the Trinity. Perhaps that last example gives us the answer: when any faith thinks itself the only true doctrine, it will get round to killing those who disagree.

Let me be clear. I believe that the truth of God is to be found in discipleship of Jesus and the illumination of the Holy Spirit, but I do not think that I or my church will ever be able either to grasp or to express that truth perfectly. None who seek the truth about God sincerely will ever do so in vain; and I have often been enlightened by the insights of Moslems, Hindus, Buddhists and atheists. I also believe that the truths of all human sciences can be sought, found and expressed without reference to Christian belief. Yes there may be doctrinal problems in holding such a position, but they are trivial compared with the problems caused by thinking that only one’s own truths are valid.

Luke shows us people whose stubborn, practical faith in the Way of Jesus leads them sometimes to suffer for it, but never to bring suffering on others. Instead they bring, as Philip is reported to have done in Samaria, healing of body and mind.