This Saturday blog is based on the Episcopal daily readings along with aheadline from world news:

Jesus and the Woman of Samaria

Now when Jesus* learned that the Pharisees had heard, ‘Jesus is making and baptizing more disciples than John’—2 although it was not Jesus himself but his disciples who baptized—3he left Judea and started back to Galilee.4But he had to go through Samaria.5So he came to a Samaritan city called Sychar, near the plot of ground that Jacob had given to his son Joseph.6Jacob’s well was there, and Jesus, tired out by his journey, was sitting by the well. It was about noon.

7 A Samaritan woman came to draw water, and Jesus said to her, ‘Give me a drink’.8(His disciples had gone to the city to buy food.)9The Samaritan woman said to him, ‘How is it that you, a Jew, ask a drink of me, a woman of Samaria?’ (Jews do not share things in common with Samaritans.)*10Jesus answered her, ‘If you knew the gift of God, and who it is that is saying to you, “Give me a drink”, you would have asked him, and he would have given you living water.’11The woman said to him, ‘Sir, you have no bucket, and the well is deep. Where do you get that living water?12Are you greater than our ancestor Jacob, who gave us the well, and with his sons and his flocks drank from it?’13Jesus said to her, ‘Everyone who drinks of this water will be thirsty again,14but those who drink of the water that I will give them will never be thirsty. The water that I will give will become in them a spring of water gushing up to eternal life.’15The woman said to him, ‘Sir, give me this water, so that I may never be thirsty or have to keep coming here to draw water.’

16 Jesus said to her, ‘Go, call your husband, and come back.’17The woman answered him, ‘I have no husband.’ Jesus said to her, ‘You are right in saying, “I have no husband”;18for you have had five husbands, and the one you have now is not your husband. What you have said is true!’19The woman said to him, ‘Sir, I see that you are a prophet.20Our ancestors worshipped on this mountain, but you* say that the place where people must worship is in Jerusalem.’21Jesus said to her, ‘Woman, believe me, the hour is coming when you will worship the Father neither on this mountain nor in Jerusalem.22You worship what you do not know; we worship what we know, for salvation is from the Jews.23But the hour is coming, and is now here, when the true worshippers will worship the Father in spirit and truth, for the Father seeks such as these to worship him.24God is spirit, and those who worship him must worship in spirit and truth.’25The woman said to him, ‘I know that Messiah is coming’ (who is called Christ). ‘When he comes, he will proclaim all things to us.’26Jesus said to her, ‘I am he,* the one who is speaking to you.’

Jacob and rachel at the well: Raffael.

John writes apparently straightforward stories which are shot through with allusions to other bible stories, in order to add to the richness of his meaning. In bible blog 967 I showed how the story of Jacob at Bethel underlay the story of Nathaniel, so that Jesus was depicted as a “Bethel”, that is, as a dwelling of God. In today’s story Jacob is mentioned explicitly:

1. The well is Jacob’s well

2. This meeting of a man and a woman by a well reminds the reader of the patriarchal stories of Isaac and Jacob encountering their wives-to-be at a well. The ide of the man as bridegroom is present.

3. The well is deep as it stands for the depth of the Jewish tradition of faith.

4. God and his Messiah were both imagined as the “Bridegroom of Israel.”

In addition to these elements connected with Jacob there are elements to do with Samaritan-Jewish relationships:

5. The Samaritans were considered unorthodox and unfaithful to the true religion.

6. In particular, although they shared the Torah (FIVE books) with traditional Judaism, they insisted on their own different traditions and interpretations.

With those matters in mind we can see that here Jesus plays the part of the patriarch looking for a wife, “Give me a drink,” he asks. Soon however it becomes clear that although ordinary water is necessary for life, Jesus is using it as a symbol of something even more important: the new life which comes from above, of which he has spoken to Nicodemus. The image he uses is very powerful. Jesus’ gift will be a “spring of water bubbling up into eternal life.” This well will no longer be physical and external, like Jacob’s, but spiritual and internal. The woman understands Jesus but is unwilling to trust him, so she turns his offer into a joke: if Jesus’ water lasts for ever, she would not need to come to the well daily. Jesus turns the tables on her by asking her to call her husband. Perhaps he has guessed at her doubtful status because she is at the well on her own in the middle of the day, and not with the other married women. When she admits  she has no husband, Jesus uses words which may be appropriate to her marital history but are also appropriate to the religious history of her people. (Once they had the five books of Moses but now they have abandoned them.) Again, the woman tries to deflect the conversation into safer areas by rising the issue of the sacred dwelling place of God-is it Jerusalem or Mount Gerizim in Samaria? Jesus, the One who is himself a Bethel, a dwelling of God, reveals to the woman that true faith requires no shrines or temples but only trust in the One from above who delights to be in the midst of his people. When the woman observes that only Messiah knows these things, Jesus identifies himself. 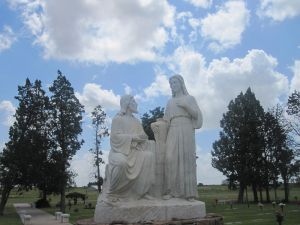 Jesus and the woman at the well

We can easily get lost in the folds of this teasing story. At the very least we should grasp three strands of meaning:

1. The story depicts God in Jesus as the wooer of humanity, the one who seeks love(!).

2. The new life that God gives through Jesus is forever fresh.

3. This new life is nothing less than the dwelling of the holy one in women and men.

I can put myself in this story. Here I am seated by the well from which I draw my life (my own preferences and traditions); and Jesus appears asking for water. I’m not sure if I want this stranger in my life, so I knock him back. Why’s he asking me? He speaks to me about living water, about something so alive it will bubble up forever, and it strikes a chord in me, but this conversation is getting out of hand, so I try to block it. Then he says, “Show me your shame.” And stunned as I am by his impertinence, I know I don’t need to show it for he knows it already; and with that recognition, I know that he, the holy one, has come looking for me. Not for an ideal and sinless me, but for me, the unfaithful and rebellious one. The sense of divine presence is so strong that I want to keep it at a distance, in a suitably managed shrine. I ask him where  this might be. “In you,” he says, “and in me.”