15 The day before Sha’ul arrived, Adonai had given Sh’mu’el a revelation: 16 “Tomorrow at about this time I will send you a man from the territory of Binyamin. You are to anoint him prince over my people Isra’el. He will save my people from the power of the P’lishtim, because I have seen my people’s situation, and their cry of distress has come to me.” 17 When Sh’mu’el saw Sha’ul, Adonai said to him, “Here is the man I told you about, the one who is going to govern my people.”

18 Sha’ul approached Sh’mu’el in the gateway and said, “Please tell me where the seer’s house is.” 19 Sh’mu’el answered Sha’ul, “I’m the seer. Go up ahead of me to the high place, because you are going to dine with me today. In the morning, I will let you leave; and I will tell you everything that is on your heart. 20 As for your donkeys that got lost three days ago, don’t worry about them; they’ve been found. Now, who is it that all Isra’el wants? Isn’t it you, and all your father’s household?” 21 Sha’ul replied, “I’m only a man from Binyamin, the smallest tribe in Isra’el; and my family is the least important of all the families in the tribe of Binyamin! Why are you saying such a thing to me?”

22 Sh’mu’el took Sha’ul and his servant, brought them into the room and had them sit in the place reserved for the most important of the invited guests, who numbered about thirty persons. 23 Sh’mu’el instructed the cook, “Serve the portion I gave you and told you to set aside.” 24 The cook took the thigh and the adjoining meat and served it to Sha’ul. Sh’mu’el said, “Here, this is what remains! Put it in front of you and eat — it was kept especially for you until the right time; because I said, ‘I have invited the people.’” So Sha’ul dined with Sh’mu’el that day. 25 On coming down from the high place to the city, he spoke with Sha’ul on the roof.

26 They got up early. About daybreak, Sh’mu’el called out to Sha’ul on the roof, “Get up, so I can send you on your way.” Sha’ul got up, and both of them — he and Sh’mu’el — went out. 27 As they were going down, at the edge of the city, Sh’mu’el said to Sha’ul, “Tell the servant to go on ahead”; so the servant went on. “But you, stand still now, because I want you to hear what God has said.”

10 Then Sh’mu’el took a flask of oil he had prepared and poured it on Sha’ul’s head. He kissed him and said, “Adonai has anointed you to be prince over his inheritance.

Of course, things don’t actually happen this way. In the murky real world of prophets and kings there’s a good deal of preliminary checking and negotiating to be done before God’s decision is made. So why does the author tell it this way? He does so in order to emphasise the naivity of Sha’ul – he has scarcely thought an adult thought far less an ambitious one – and the distinctive wisdom of God – who chooses a complete unknown to rule his people because he discerns his hidden aptitude. The reality the author wants to communicate is that  this very secular matter, the choice of a ruler, is effortlessly over-ruled by God.

It’s unclear whether the customs portrayed, the prophet’s dinner, the “royal” portion, the roof apartment, are those of “ancient times in Israel” or those imagined to be ancient by the writer. In any case they are meant, like descriptions of meals by Homer, to represent the simplicity and nobility of an heroic age. 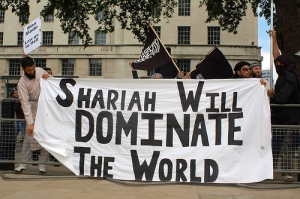 a faith that controls secular politics

The writer depicts for his readers a crucial time in their past, the origins of Israel as a secular state, ruled “like other nations” by a king. God effortlessly adjusts his will to include this development and communicates his special interest through his prophet. Faith does not try to dominate politics – as happens in an ancient theocracy like Egypt or a modern one like Iran- bur rather interferes in political decisions from the perspective of God’s honour and God’s law. This remains the view of my own church, the Church of Scotland, and of many other churches today. God does not deprive nations of their political processes but he may interfere in them, for the sake of justice and peace. God’s interference is made real by human beings, his prophets, who have themselves no power other than the message God gives them. This understanding of the relationship of faith and politics is not at all irrelevant in a world where Islamic political groups seek to impose religious law on all citizens in a state.