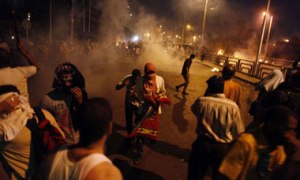 Saul Is Rejected as King

15 Then Samuel said to Saul, “I was the one the Lord sent to anoint you as king over his people Israel. Now listen to what the Lord says. 2 Here is what the Lord of hosts says: ‘I carefully observed how the Amalekites opposed Israel along the way when Israel came up from Egypt. 3 So go now and strike down the Amalekites. Destroy everything that they have. Don’t spare them. Put them to death—man, woman, child, infant, ox, sheep, camel, and donkey alike.’”

4 So Saul assembled the army and mustered them at Telaim. There were 200,000 foot soldiers and 10,000 men of Judah. 5 Saul proceeded to the city of Amalek, where he set an ambush in the wadi. 6 Saul said to the Kenites, “Go on and leave! Go down from among the Amalekites! Otherwise I will sweep you away with them! After all, you were kind to all the Israelites when they came up from Egypt.” So the Kenites withdrew from among the Amalekites.

7 Then Saul struck down the Amalekites all the way from Havilah to Shur, which is next to Egypt. 8 He captured King Agag of the Amalekites alive, but he executed all Agag’s people with the sword. 9 However, Saul and the army spared Agag, along with the best of the flock, the cattle, the fatlings, and the lambs, as well as everything else that was of value. They were not willing to slaughter them. But they did slaughter everything that was despised and worthless.

10 Then the word of the Lord came to Samuel: 11 “I regret that I have made Saul king, for he has turned away from me and has not done what I told him to do.” Samuel became angry and he cried out to the Lord all that night.

12 Then Samuel got up early to meet Saul the next morning. But Samuel was informed, “Saul has gone to Carmel where he is setting up a monument for himself. Then Samuel left and went down to Gilgal.” 13 When Samuel came to him, Saul said to him, “May the Lord bless you! I have done what the Lord said.”

14 Samuel replied, “If that is the case, then what is this sound of sheep in my ears and the sound of cattle that I hear?” 15 Saul said, “They were brought from the Amalekites; the army spared the best of the flocks and cattle to sacrifice to the Lord our God. But everything else we slaughtered.”

16 Then Samuel said to Saul, “Wait a minute! Let me tell you what the Lord said to me last night.” Saul said to him, “Tell me.” 17 Samuel said, “Is it not true that when you were insignificant in your own eyes, you became head of the tribes of Israel? The Lord chose you as king over Israel. 18 The Lord sent you on a campaign saying, ‘Go and exterminate those sinful Amalekites! Fight against them until you have destroyed them.’ 19 Why haven’t you obeyed the Lord? Instead you have greedily rushed upon the plunder! You have done what is wrong in the Lord’s estimation.”

20 Then Saul said to Samuel, “But I have obeyed the Lord! I went on the campaign the Lord sent me on. I brought back King Agag of the Amalekites after exterminating the Amalekites. 21 But the army took from the plunder some of the sheep and cattle—the best of what was to be slaughtered—to sacrifice to the Lord your God in Gilgal.”

“Does the Lord take pleasure in burnt offerings and sacrifices
as much as he does in obedience?
Certainly, obedience is better than sacrifice;
paying attention is better than the fat of rams.
23 For rebellion is like the sin of divination,
and presumption is like the evil of idolatry.
Because you have rejected the word of the Lord,
he has rejected you as king.

This is not a good story. The Lord is shown arranging ethnic cleansing for the Amalekites; and Saul’s disobedience is not motivated by concern for human or animal life, but for booty.

There are all kinds of strategies used by scholars to make the story less offensive, ranging from a reminder that it is after all a story rather than history, to a discussion of the complex theology of the various editors of the “Samuel material.” None of these are at all worthwhile unless preceded by a plain admission that the story makes God a vicious killer. As such it is idolatry and abomination. If God initiates ethnic cleansing he gives the wink to Nazis,  Serbs, Hutus and others, that extermination may sometimes be justifiable.

Followers of Jesus, therefore, must be sure that the inclusion of such writings in their Bible does not imply approval of all their contents; and that their interpretation of all scripture is done in the light of Jesus, with the inspiration of the Holy Spirit, in company with people of all races in the world church. Interpreted in that way, any reading of this passage in worship should be followed by the  announcement, “This is not the Word  of the Lord.”

Tags: abomination in the Bible, God's ethnic cleansing, This not the Word of the Lord