This blog offers a meditation on the Common Lectionary daily readings along with a headline form world news:

16 When the Sabbath was over, Mary Magdalene, Mary the mother of James, and Salome bought aromatic spices so that they might go and anoint him. 2 And very early on the first day of the week, at sunrise, they went to the tomb. 3 They had been asking each other, “Who will roll away the stone for us from the entrance to the tomb?” 4 But when they looked up, they saw that the stone, which was very large, had been rolled back. 5 Then as they went into the tomb, they saw a young man dressed in a white robe sitting on the right side; and they were alarmed. 6 But he said to them, “Do not be alarmed. You are looking for Jesus the Nazarene, who was crucified. He has been raised! He is not here. Look, there is the place where they laid him. 7 But go, tell his disciples, even Peter, that he is going ahead of you into Galilee. You will see him there, just as he told you.” 8 Then they went out and ran from the tomb, for terror and bewilderment had seized them. And they said nothing to anyone, because they were afraid. 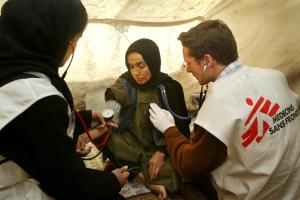 This is the last section of Mark’s gospel. Some of its early readers, offended that it didn’t give some appearances of the risen Jesus, added new endings. They failed to see what Mark was doing with the ending he actually wrote.

Again Mark gives us witnesses who would have been considered unconvincing: three women, going to anoint Jesus’ body, only to find that the stone, the full stop to Jesus’ life, had been rolled away. (The empty tomb is only mentioned in the gospels. Paul who wrote much earlier, never refers to it.)  For Mark it is a proof of nothing; rather a pointer to the mystery that cannot be described. The young man dressed in white is the counterpart to the naked young man who ran away a Jesus’ arrest. He is a representative gospeller who announces good news. The good news of resurrection is:

3. He is going ahead to Galilee

4.He will meet you there.

5. He told you this in advance.

To be raised by God, was for Mark, to be taken by God from death to life as had been promised for the time of God’s kingdom.  The tomb is declared irrelevant. It was not to become a sacred site for believers. Those who wanted to meet with Jesus were reminded of his promised rendezvous, in Galilee, that is, in their ordinary living and working place. There Jesus would meet his disciples. Mark does not give any stories of these encounters since each disciple has to keep rendezvous himself. The invitation  comes from the risen one however!  His words about meeting them in Galilee were given in his former life, but the words, “even Peter” can only come from the resurrected Jesus, offering forgiveness, a second chance, and new adventures. The reader is by implication also invited to meet Jesus in their own Galilee, which may be in first century Rome or twenty first century New York or Dundee, Scotland.

The resurrection is not witnessed in Jerusalem, in the crucifying centre of secular and religious power, (it must make do with the ambiguous sign of an empty tomb, a cancelled fullstop)  but by the sinful, betraying, ordinary people who love Jesus. “Don’t try to come to Jerusalem to find the risen Lord!” Mark advises. “He is NOT here!” Go to meet him in the place of your daily living where you’ll find that he goes before you. And what happens then?

To answer that question we have to ask another. Who is the one who arrives at the Jordan at the beginning of the Gospel? Answer: He is the crucified and risen Lord, the one who brings healing for the sick, forgiveness for the sinners, life for the dead. The one who starts the ministry of life is also the one who finishes it on the cross and is raised to life by God. The reader of the ending of the gospel is plunged back into start of it, to share in the liberation that Jesus brings to the world. The story of Jesus earthly ministry is also the story of his ministry with his disciples in every time and place. That’s why the story cannot simply be viewed as past history. The whole gospel is already an account of the ever- renewed ministry of Jesus to the world.

Knowing the risen Jesus in our Galilees means experiencing his suffering and his victory as he leads his disciples into the kingdom of God, as he did in Palestine.

This way of telling the Jesus story is a profound and astonishing piece of theology which has been ill-served by the timid interpretations of most commentators throughout the Christian era. But I offer it from Mark to my readers. If you ask, who are the witnesses to the resurrection in Mark’s gospel, the answer is, you and me, if we keep the rendezvous he offers us.

Tags: the power of Mark's gospel, the truth of the resurrection, where to meet Jesus