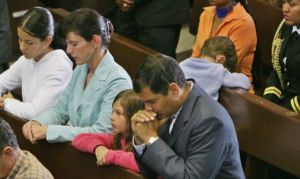 Rafael Correa, Ecuadorean President with his family at Mass

The Parable of the Sower

13 On that day after Jesus went out of the house, he sat by the lake. 2 And such a large crowd gathered around him that he got into a boat to sit while the whole crowd stood on the shore. 3 He told them many things in parables, saying: “Listen! A sower went out to sow. 4 And as he sowed, some seeds fell along the path, and the birds came and devoured them. 5 Other seeds fell on rocky ground where they did not have much soil. They sprang up quickly because the soil was not deep. 6 But when the sun came up, they were scorched, and because they did not have sufficient root, they withered. 7 Other seeds fell among the thorns, and they grew up and choked them. 8 But other seeds fell on good soil and produced grain, some a hundred times as much, some sixty, and some thirty. 9 The one who has ears had better listen!” 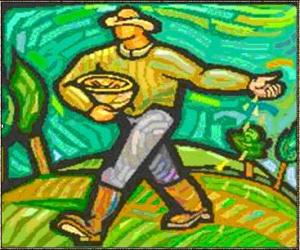 In the gospels of Mark and Matthew, this parable exists as a) a story and b) an explanation by Jesus of the story’s meaning. That sounds OK but there is a problem: the official interpretation of the story is clumsy and forced. The difference between them can be summed up by describing the story as the parable of the sower and the explanation as the allegory of the soils. The story as we have it here and in Mark chapter 4 focuses on the careless, almost wasteful. generosity of the sower who sows seed without minute examination of the condition of the soil. His job is to sow; in Palestinian farming of the time, the ground was ploughed after sowing. The reader may wonder at the apparent carelessness, may even ask if this kind of sowing is worth the effort,, but in fact Jesus’ hearers know that this is exactly how seed is sown and there will be an abundant harvest. If the sower tried to determine the result in advance, the seed would never get sown. Confidence and trust in the process are necessary.

This story looks like a picture of the ministry of God’s rule (kingdom) as Jesus sees it. God sows the seeds, which are people who show his goodness in word and action. They too act with joy and carelessness, by going wherever they’re sent. This may look like a crazy waste of time, but to those who understand, it’s the natural way for God to establish his way in the world. The message for the mission of the church is clear: don’t try to predetermine the harvest, just allow the sower to scatter you around!

The explanation on the other hand, makes the story an allegory about how people receive the gospel. It reveals a strand of tradition which is 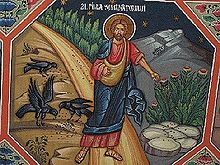 already asking about the effectiveness of missionary preaching. As such it’s quite shrewd, but nothing like as challenging as the story Jesus told. Some scholars suggest that  Jesus’ parables became difficult to interpret in the early Christian communities, and had to be explained in ways that belong to the situation of the early church rather than that of Jesus’ ministry. The interesting thing is that in spite of evident difficulty, Jesus story is preserved in a form that lets the reader of the gospel guess its authentic application.

Tags: parable of the sower, Seeds of the kingdom, The Careless Kingdom