This blog offers a meditation on the common Lectionary daily readings along with a headline from world news:

6 When people had spread all over the world, and daughters were being born, 2 some of the heavenly beings[a] saw that these young women were beautiful, so they took the ones they liked. 3 Then the Lord said, “I will not allow people to live forever; they are mortal. From now on they will live no longer than 120 years.” 4 In those days, and even later, there were giants on the earth who were descendants of human women and the heavenly beings. They were the great heroes and famous men of long ago.

5 When the Lord saw how wicked everyone on earth was and how evil their thoughts were all the time, 6 he was sorry that he had ever made them and put them on the earth. He was so filled with regret 7 that he said, “I will wipe out these people I have created, and also the animals and the birds, because I am sorry that I made any of them.” 8 But the Lord was pleased with Noah. 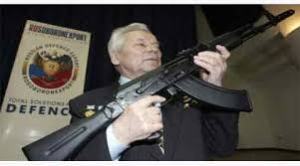 Kalashnikov repented his invention of the AK47

I’ve used the Good News translation for this because it is plain and succinct. The story explains the existence of the legendary heroes of the past, as being the offspring of human women and supernatural beings. The nature and origin of these beings is not mentioned, but it is clear that that their behaviour is hostile to the creator. God tries to limit the capacity of human beings by limiting their years; but when the impulse to evil spreads throughout humanity, God regrets his creation of humanity. More, he regrets his creation of all life. This portrays a profound wound in the being of God; the creator becomes the un-creator.

I have emphasised that the character of God in the story is a cartoon “God”, a manga divinity, who is being used to explore the meaning of God in the world as it is. The idea of God’s hurt rage is daring. If God cares about his creation, of course he’ll be angry; if there was no anger there would also be no concern. The anger of God may have unpredictable consequences. But how can anything be unpredictable to God? The author is clear that “God” didn’t predict human wickedness and its results. And as we see after the flood, God also failed to predict his own revulsion at the deaths he has caused. Very cunningly, while telling a story about God the author is undermining any simplistic faith in him. He makes the reader notice the problems of being God. It is a grand irony of history that this subtle and searching narrative should have been repeatedly used by humourless theologians to assert the total corruption of humankind.

I’ve told the story of Genesis to children, picturing God as “BIG G”, a powerful but ineffective deity who cannot control his creation. The children sympathise with him, as they do with their own parents, but they don’t for a minute regret their own independence and naughtiness. Of course, the wickedness of human beings is a misery for humanity at large and for all creatures, but the narrative only dramatises the anger of God, whose decision to waste all living things is as inexplicable as his decision to create them. The reader probably knows before God does, that his decision to destroy is a mistake.

Cain fleeing the wrath of God

The storyteller knows that we invent our God or Gods. Our inventions explore the human experience of the beyond in our midst; and our refining of these inventions allows us to draw nearer to the holy presence, without imagining that we can ever describe it fully. In the strange story of God and his creation human beings refuse to play the part written for them, thus requiring God to change his part also.