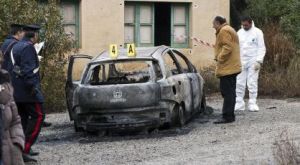 Mafia murder in Calabria this week

9 God blessed Noah and his sons and said, “Have many children, so that your descendants will live all over the earth. 2 All the animals, birds, and fish will live in fear of you. They are all placed under your power. 3 Now you can eat them, as well as green plants; I give them all to you for food. 4 The one thing you must not eat is meat with blood still in it; I forbid this because the life is in the blood. 5 If anyone takes human life, he will be punished. I will punish with death any animal that takes a human life. 6 Human beings were made like God, so whoever murders one of them will be killed by someone else.

7 “You must have many children, so that your descendants will live all over the earth.”

God’s covenant with Noah is marked by more “realistic” provisions than his original command to Adam and Eve. The author means us to see that humanity’s view of its own superiority to other animals has to be recognised by God, who permits humans to kill animals but not vice versa. Indeed human life itself has to be protected from other humans by the death penalty for murder.

God also renounces the means by which he expressed his  wrath. There will be no more universal destruction by the powers of chaos. God will preserve life on earth and invents the rainbow as a reminder of this promise. Presumably there had been no rainbows before this.

The whole story breaths an atmosphere of relief rather than promise. Life on earth has survived by a whisker. God has just managed to preserve his own creatures from his own wrath. Things can now begin again-but let all parties exercise caution.

It’s worth noting that Noah is still presented as a universal ancestor; God’s covenant with him is with all humanity, rather than with a particular race or faith.

The author (s) of Genesis is/are patient in developing the characters of humanity and the Creator God. Obviously something has gone seriously wrong with the originally “good” creation, and the author does not put the whole blame on either party but shows God’s repeated attempts to reckon with the human beings he has made and to restore his blessing to the whole world. Those who’ve also read the book of Revelation know that the Covenant with Noah is not God’s last word on destruction; as the Afro-American spiritual has it:

No more water, but the fire next time”

Tags: death penalty, no more water but the fire next time, Rainbow