BOTH SIDES IN UKRAINE LOOK TO PARLIAMENT TO RESOLVE CRISIS

The Birth of Isaac

21 The Lord blessed Sarah, as he had promised, 2 and she became pregnant and bore a son to Abraham when he was old. The boy was born at the time God had said he would be born. 3 Abraham named him Isaac, 4 and when Isaac was eight days old, Abraham circumcised him, as God had commanded. 5 Abraham was a hundred years old when Isaac was born. 6 Sarah said, “God has brought me joy and laughter.[a] Everyone who hears about it will laugh with me.” 7 Then she added, “Who would have said to Abraham that Sarah would nurse children? Yet I have borne him a son in his old age.”

8 The child grew, and on the day that he was weaned, Abraham gave a great feast.

Hagar and Ishmael Are Sent Away

9 One day Ishmael, whom Hagar the Egyptian had borne to Abraham, was playing with[b] Sarah’s son Isaac.[c] 10 Sarah saw them and said to Abraham, “Send this slave and her son away. The son of this woman must not get any part of your wealth, which my son Isaac should inherit.” 11 This troubled Abraham very much, because Ishmael also was his son. 12 But God said to Abraham, “Don’t be worried about the boy and your slave Hagar. Do whatever Sarah tells you, because it is through Isaac that you will have the descendants I have promised. 13 I will also give many children to the son of the slave woman, so that they will become a nation. He too is your son.”

14 Early the next morning Abraham gave Hagar some food and a leather bag full of water. He put the child on her back and sent her away. She left and wandered about in the wilderness of Beersheba. 15 When the water was all gone, she left the child under a bush 16 and sat down about a hundred yards away. She said to herself, “I can’t bear to see my child die.” While she was sitting there, she[d] began to cry.

17 God heard the boy crying, and from heaven the angel of God spoke to Hagar, “What are you troubled about, Hagar? Don’t be afraid. God has heard the boy crying. 18 Get up, go and pick him up, and comfort him. I will make a great nation out of his descendants.” 19 Then God opened her eyes, and she saw a well. She went and filled the leather bag with water and gave some to the boy. 20 God was with the boy as he grew up; he lived in the wilderness of Paran and became a skillful hunter. 21 His mother got an Egyptian wife for him. 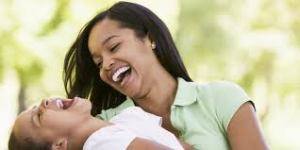 “God has made laughter for me”

The sure hand of the author takes the story forward. The birth of a son to Sarah is marked by Abraham giving him the name “Isaac” meaning “he laughs” or “laughter” a lovely name for a child; but the real giver of this name is Sarah, for whom it means her own laughter at the notion of sex and childbirth at her and her husband’s age; the laughter of the community who will appreciate the humour of it; and behind it all the laughter of God, whom, she says, has given laughter to her. Laughter has not been associated with God until this point in the story. That’s because here, God’s unlikely plan of gaining the support of human beings in order to bless all people, begins to bear fruit. The fact that it depends on the birth of a child to an aged couple shows that it is, in the Duke of Wellington’s words, “A damned close -run thing.” It also shows, to those who can see, the hand of God. It teaches us to look in very ordinary circumstances for the moments when humanity’s long journey into night takes a turn towards the dawn.

The whole thing could so easily turn back towards darkness. Sarah’s jealousy of Hagar and her  child blazes out. Now God is depicted as involved in the little details of human life, exactly where things start going wrong. He cannot remain at a distance as he did with Cain and Abel simply looking on from afar; but neither can he force his will on humans by supernatural intervention. Instead he works through Abraham’s faith in the first instance to get Hagar and Ishmael out of range of Sarah’s hate; and then through Hagar’s faith to give her hope and open her eyes to life-saving water. The contact of God with humanity is through God’s own “senses”; he “hears” the boy in this instance, as before (16:14) he has “seen” Hagar’s need. His attention “opens Hagar’s eyes” to see the source of life. This way of  talking about God shows that he misses nothing but also does nothing to infringe human independence, while enabling some goodness to happen. 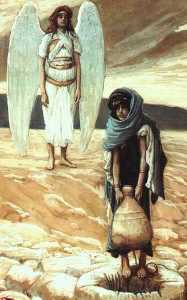 God hears the cry of the needy

These narratives are important for Judaism and Christianity, but also for the development of Islam, which holds “Ibrihim” as a “friend of Allah” while he and his son Ismail are celebrated as the initiators of Hajj, pilgrimage. This is a tribute to the Genesis storyteller(s) who has made a narrative that people refuse to forget, even thousands of years later.