This blog offers a meditation on the Common Lectionary along with a headline from world news:

57 It should be understood that the chief priests and the Pharisees had issued an order that anyone who knew of Jesus’ whereabouts should tell them, so they could arrest him.

12 1-5 Six days before the Passover, Jesus came to Bethany, the village of Lazarus whom he had raised from the dead. They gave a supper for him there, and Martha waited on the party while Lazarus took his place at table with Jesus. Then Mary took a whole pound of very expensive perfume and anointed Jesus’ feet and then wiped them with her hair. The entire house was filled with the fragrance of the perfume. But one of his disciples, Judas Iscariot (the man who was going to betray Jesus), burst out, “Why on earth wasn’t this perfume sold? It’s worth thirty pounds, which could have been given to the poor!”

6 He said this, not because he cared about the poor, but because he was dishonest, and when he was in charge of the purse used to help himself to the contents.

7-8 But Jesus replied to this outburst, “Let her alone, let her keep this for the day of my burial. You have the poor with you always—you will not always have me!” 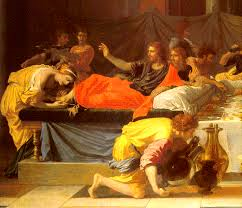 The story of a woman who poured perfume over Jesus feet and wiped it away with her hair is also found in Luke’s gospel, perhaps in a more convincing context. Mark and Matthew have a story about a woman who broke an alabaster jar containing nard over Jesus’ head. Christian tradition has added to this confusion by identifying all these women as Mary Magdalene when it’s quite clear that she is unidentified in Luke, Mark and Matthew, and clearly identified as Mary sister of Lazarus in John.

In the story above, the motive for Mary’s action  is recognition of Jesus’ as the bearer of God’s goodness especially in his raising of her brother from death. The reader is meant to see her gesture as something like anointing the Messiah (literally “anointed one”), as well as an expression of love. Jesus accepts the gesture as appropriate for his imminent death, and only for that. He is not going to be with them as an admired and lauded leader, but rather about to suffer betrayal, rejection, cruelty and death. As a recognition of the soon-to-be-crucified- Messiah, Mary’s anointing of him is right.

The reply of Jesus is quoted by Mark and Matthew, but they do not ascribe the protest to Judas, nor do they assert that Judas was a thief.

By comparing all these passages, the modern reader can see the freedom with which the Gospel writers treated the tradition which they shared, using it to express their fundamental vision of Jesus. But there is no doubt that the tradition itself gives unusual even scandalous credibility to the discipleship of women like Martha and Mary, and makes it clear that this equality was initiated by Jesus.

All the gospels are involved in a redefinition of the title, Messiah, the one anointed by God to bring justice to his people. From the start of his Gospel John proclaims Jesus as Messiah but also as Lamb of God, as the one who will be lifted up (on the cross, to God.) For him, as for St Paul, the only true Messiah is the crucified Jesus. The Son of God is not Superman, but the One who demonstrates the love of God and is slaughtered for it. Mary’s gesture is love for the crucified not the start of a personality cult.

Of course the poor are more important most of the time but this is not most of the time: it is the time of revelation when the extremity of God’s love will become apparent and will inspire the most practical love of the poor. The late Sydney Carter, the song-writer, puts it well in his version of this incident:

The poor are with you always

“The poor of the world are my body, he said;

To the end of the world, it shall be:

The bread and the blankets you give to the poor

Tags: Jesus anointed by Mary, Son of God is not Superman, The crucified Messiah