8 Now concerning food sacrificed to idols: we know that ‘all of us possess knowledge.’ Knowledge puffs up, but love builds up. 2 Anyone who claims to know something does not yet have the necessary knowledge; 3 but anyone who loves God is known by him.

4 Hence, as to the eating of food offered to idols, we know that ‘no idol in the world really exists’, and that ‘there is no God but one.’ 5 Indeed, even though there may be so-called gods in heaven or on earth—as in fact there are many gods and many lords— 6 yet for us there is one God, the Father, from whom are all things and for whom we exist, and one Lord, Jesus Christ, through whom are all things and through whom we exist.

7 It is not everyone, however, who has this knowledge. Since some have become so accustomed to idols until now, they still think of the food they eat as food offered to an idol; and their conscience, being weak, is defiled. 8 ‘Food will not bring us close to God.’[a] We are no worse off if we do not eat, and no better off if we do. 9 But take care that this liberty of yours does not somehow become a stumbling-block to the weak. 10 For if others see you, who possess knowledge, eating in the temple of an idol, might they not, since their conscience is weak, be encouraged to the point of eating food sacrificed to idols? 11 So by your knowledge those weak believers for whom Christ died are destroyed.[b] 12 But when you thus sin against members of your family,[c] and wound their conscience when it is weak, you sin against Christ. 13 Therefore, if food is a cause of their falling,[d] I will never eat meat, so that I may not cause one of them[e] to fall. 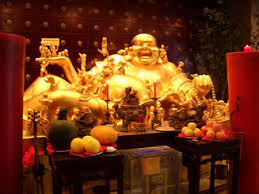 Paul’s discernment here is acute. The people he quotes, who want to assert their freedom to eat meat that had been offered to idols-it may have been cheap, or offered by pagan friends- were happy in their own knowledge that it could do them no harm because the “gods” to whom it had been offered were non-existent. Paul sees that this assertion of superior theology is arrogant: “knowledge puffs up but love builds up.” This should be adopted as a motto by all voluntary communities. It is not our knowledge of God that counts, Paul says, but God’s knowledge of us, that is, his relationship with us in love. For Paul the former Pharisee, “knowledge” always retains its Hebrew connotation of intimacy.

The love believers should have for the whole church, Paul says, should make them wary of asserting a freedom which might lead less robust believers to eat meat against their own consciences and so damage their faith. Is Paul saying that the practice of the church must be ruled by the scruples of its least sophisticated members? Yes, I think he is. But what does that say about issues like divorce, abortion, same-sex relationships, where very loud “weaker” brothers and sisters claim the right to anathematise more sophisticated views? I don’t think these knowledgeable fundamentalists can be considered weaker, according to Paul, especially given their willingness to pass judgement on “weaker” brothers and sisters who are divorced, have had an abortion or are gay. Paul is not saying that more liberal practice is always wrong if it offends. He is saying that lack of love for the whole community of believers is always destructive whatever quarter it comes from. To disregard the body of Christ is to disregard Christ.

The Christian tradition has an ambiguous relationship with knowledge. When the seeker of knowledge acts out of love for the universe and the life within it, the tradition holds that the knowledge

will be a blessing; but when the seeker acts out a love of power, the knowledge will be a curse. The story of Adam and Eve shows them seeking to become “like Gods, knowing everything”,  consequently the knowledge they gain is accursed. Knowledge puffs up but love builds up. Paul applies this insight to the community of believers, but those who learn this truth there, will apply it to all the communities in which they live. Paul’s thinking here should be disturbing to all who consider that possessing a truth makes them superior to those who lack it.

Tags: knowledge puufs up but love builds up, snoopy's prologue to theology, the fruit of knowledge