14 So then, my dear friends, flee from idolatry. 15 I am speaking to thoughtful people. Consider what I say. 16 Is not the cup of blessing that we bless a sharing in the blood of Christ? Is not the bread that we break a sharing in the body of Christ? 17 Because there is one bread, we who are many are one body, for we all share the one bread. 18 Look at the people of Israel. Are not those who eat the sacrifices partners in the altar? 19 Am I saying that idols or food sacrificed to them amount to anything? 20 No, I mean that what the pagans sacrifice is to demons and not to God. I do not want you to be partners with demons. 21 You cannot drink the cup of the Lord and the cup of demons. You cannot take part in the table of the Lord and the table of demons. 22 Or are we trying to provoke the Lord to jealousy? Are we really stronger than he is?

23 “Everything is lawful,” but not everything is beneficial. “Everything is lawful,” but not everything builds others up. 24 Do not seek your own good, but the good of the other person. 25 Eat anything that is sold in the marketplace without questions of conscience, 26 for the earth and its abundance are the Lord’s. 27 If an unbeliever invites you to dinner and you want to go, eat whatever is served without asking questions of conscience. 28 But if someone says to you, “This is from a sacrifice,” do not eat, because of the one who told you and because of conscience— 29 I do not mean yours but the other person’s. For why is my freedom being judged by another’s conscience? 30 If I partake with thankfulness, why am I blamed for the food that I give thanks for? 31 So whether you eat or drink, or whatever you do, do everything for the glory of God. 32 Do not give offense to Jews or Greeks or to the church of God, 33 just as I also try to please everyone in all things. I do not seek my own benefit, but the benefit of many, so that they may be saved. 11 1 Be imitators of me, just as I also am of Christ. 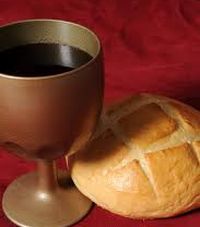 The first section of this argument is clear and illuminating. Paul appeals to the Corinthian’s experience of the Lord’s Supper as celebrated by a house church. There is a shared identity between the believers and Messiah Jesus which is dramatised in this sacrament: sharing the wine mimes their sharing in the sacrificial death of Jesus; just as the bread mimes their share in his risen body. The drama  embodies a spiritual reality, while it is also a real social event of sharing which unites the participants.

Paul carries this latter aspect of the Supper into his discussion of the food offered to idols. Of course those strong in faith know that the idols have no reality and therefore have no problem eating such food; but nevertheless Paul says, the real event of sharing does publicly bind them to the idol, if they the eat food which they know comes from a sacrifice. Out of respect for the conscience of  the pagan who offers it to them, they should refuse.

This bit of the argument is expressed clumsily but its meaning is clear and is reinforced by Paul’s appeal to the church’s mission, “I do not seek my own benefit but the benefit of many, so that they may be saved”.  That’s much more important than squabbles between “weak”and “strong” believers.

It’s worth noting that Paul quotes the Corinthian phrase, “everything is lawful”  without disagreeing in principle. He has taught them that as believers they are not under the Law of God but share in his goodness. He means that God does not impose rules on human beings for his own sake but wants them to work out rules of behaviour which are beneficial and help to build up the community of faith.

Paul’s recognition of the believing  community as a vital element in Christian living is evident here. The life believers share with each other and with Messiah Jesus is transforming: it provides strength to individuals but it also implies limits to individual freedom. Much bad and hurtful behaviour is possible only because the perpetrator can move on, leaving the hurt person behind, comfortably disposed of. Paul speaks to a faith community where no one  should be treated as disposable; and therefore  everyone should behave in ways that take account of their neighbours and of their Lord, who also shares his life with them.

For a society in which almost everything and everyone are thought to be disposable, Paul’s insistence on a clear community ethos, is challenging and wholesome. Freedom is for the neighbour, not from the neighbour.

Tags: "everything is disposable, freedom for not from the neighbour, shared life