15 1-2 Now, my brothers, I want to speak about the Gospel which I have previously preached to you, which you accepted, in which you are at present standing, and by which, if you remain faithful to the message I gave you, your salvation is being worked out—unless, of course, your faith had no meaning behind it at all.

3-8 For I passed on to you Corinthians first of all the message I had myself received—that Christ died for our sins, as the scriptures said he would; that he was buried and rose again on the third day, again as the scriptures foretold. He was seen by Cephas, then by the twelve, and subsequently he was seen simultaneously by over five hundred Christians, of whom the majority are still alive, though some have since died. He was then seen by James, then by all the messengers. And last of all, as if to one born abnormally late, he appeared to me!

9-11 I am the least of the messengers, and indeed I do not deserve that title at all, because I persecuted the Church of God. But what I am now I am by the grace of God. The grace he gave me has not proved a barren gift. I have worked harder than any of the others—and yet it was not I but this same grace of God within me. In any event, whoever has done the work whether I or they, this has been the message and this has been the foundation of your faith.

16 1-2 When the Sabbath was over, Mary of Magdala, Mary the mother of James, and Salome bought spices so that they could go and anoint him. And very early in the morning on the first day of the week, they came to the tomb, just as the sun was rising.

3 “Who is going to roll the stone back from the doorway of the tomb?” they asked each other.

4-7 And then as they looked closer, they saw that the stone, which was a very large one, had been rolled back. So they went into the tomb and saw a young man in a white robe sitting on the right-hand side, and they were simply astonished. But he said to them, “There is no need to be astonished. He has risen; he is not here. Look, here is the place where they laid him. But now go and tell his disciples, and Peter, that he will be in Galilee before you. You will see him there just as he told you.”

8 And they got out of the tomb and ran away from it. They were trembling with excitement. They did not dare to breathe a word to anyone.

The face of the risen Christ, Piero della Francesca

The resurrection is described by Paul as part of the “gospel”, the “glad tidings” which he announces to the world. Often Paul refuses to admit that his gospel has been received from anyone other than God. Here however, as in his instructions about the Lord’s Supper, he speaks of what he has received from the community of faith. If we date Paul’s conversion to around 42 CE and the start of his missionary activity to around 45CE, then we can see that the tradition he received must have originated early in the history of the Messianic community. The resurrection gospel seems to be part of the earliest strata of faith in Jesus. And it is gospel, that is, a message of faith to be believed rather than a historical fact to be noted. The reason for this is that that for Paul, the appearances of the risen Jesus are faith -events: sure, there is a “seeing”; but the believer chooses to trust the content of that seeing rather than to dismiss it as a trick of the mind. Paul makes no difference between his own vision of Jesus and those of other messengers. We know from Galatians that this vision turned him from a persecutor of the Messianic community into one of its messengers. He says simply that “it pleased God to reveal his son in me.” If we can describe Paul’s “seeing” of the risen Jesus as a conversion, we may guess that the experiences of the other witnesses he mentions was similar. Seeing the risen Jesus is not like noting a fact and more like falling in love; it s a profound and life-changing encounter. In Paul’s case, we can define it as believing that the One he had opposed and persecuted was alive to forgive and to request his allegiance.

Paul never discusses the causes of his conversion but we may confidently assert that there were at least two: his Jewish faith in God on the one hand; and the behaviour of those he persecuted, on  the other. It’s not altogether to Paul’s credit that he never mentions the witness of the believers he hunted down and arrested. But unless we imagine that God works through supernatural revelations which have no earthly substance, we must think that the faith and forgiveness of his victims were a major cause of his trust in Jesus as the crucified and risen Lord.

This suggests that there is no resurrection which is separable from the crucifixion and death of Jesus; or indeed as the  four gospels later insist, no resurrection separable from the life and ministry of Jesus. Paul says he died for our sins, according to the scriptures, meaning that Jesus is the servant of God who was “bruised for our iniquities, by whose wounds we are healed” (Isaiah 53), and that he was raised according to the scriptures, meaning that Jesus is the embodiment of the rescued community of God’s people, who will be healed and raised up on the “third day” (Hosea 6). In short, Paul’s resurrection gospel is that God has defeated the powers of evil through Jesus’ self-sacrifice on the cross, and raised him to life as the beginning of a process by which all who trust in him will also be raised from death to life.

Believing in the resurrection means trusting in the complete story of Jesus as a map of the spiritual universe in which we live and move and have our being. Its truth is of course arguable, but it is not irrational.

Mark’s gospel written some twenty years later than the letter of Paul, presents a subtle story of the empty tomb. There’s very little miracle here: those who  faithfully seek the dead body of Jesus are told that he is not there, that he has been raised, and that he has appointed a rendezvous with his followers in Galilee. All of them, even Peter who has denied him, are summoned to meet him there. Then… nothing more than a note that the women were too awe-struck to speak of what had happened. 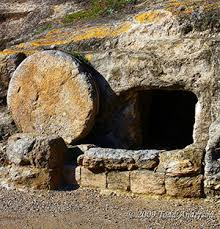 I think Mark refuses to tell the stories of Jesus’ appearances because he knows that these cannot communicate resurrection faith to the reader. No-one else’s faith in the risen Jesus can substitute for the reader’s own. All they get therefore is an announcement of Jesus’ being raised and an invitation to meet with him in “Galilee”.  Where is Galilee? For the disciples it is their home country where the ministry of Jesus has taken place. For the reader, then, it’s her own home country where the Christian community continues the ministry of Jesus: there He will meet her.

I am not a religious person and dislike all holy hocus-pocus, so I think  that the bones of Jesus are in Palestine; if they were found and identified tomorrow it wouldn’t make the slightest difference to my faith in Jesus resurrection, any more than the knowledge of my mother’s cremation alters my faith in her resurrection. For me the stories of the empty tomb are part of the imagery of faith rather a historical fact. I think it’s possible that they reflect an Easter ritual of the Jerusalem church in which people processed to Jesus’ grave to be told, “He is not here!”

Tags: Jesus is alive, Jesus' bones are in Palestine, no hocus-pocus