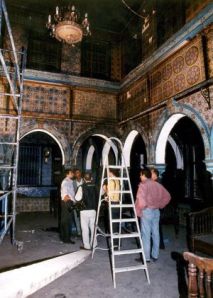 The Vision of the Chariot

1 In the thirtieth year, in the fourth month, on the fifth day of the month, as I was among the exiles by the river Chebar, the heavens were opened, and I saw visions of God. 2 On the fifth day of the month (it was the fifth year of the exile of King Jehoiachin), 3 the word of the Lord came to the priest Ezekiel son of Buzi, in the land of the Chaldeans by the river Chebar; and the hand of the Lord was on him there.

4 As I looked, a stormy wind came out of the north: a great cloud with brightness around it and fire flashing forth continually, and in the middle of the fire, something like gleaming amber. 5 In the middle of it was something like four living creatures. This was their appearance: they were of human form. 6 Each had four faces, and each of them had four wings. 7 Their legs were straight, and the soles of their feet were like the sole of a calf’s foot; and they sparkled like burnished bronze. 8 Under their wings on their four sides they had human hands. And the four had their faces and their wings thus: 9 their wings touched one another; each of them moved straight ahead, without turning as they moved. 10 As for the appearance of their faces: the four had the face of a human being, the face of a lion on the right side, the face of an ox on the left side, and the face of an eagle; 11 such were their faces. Their wings were spread out above; each creature had two wings, each of which touched the wing of another, while two covered their bodies. 12 Each moved straight ahead; wherever the spirit would go, they went, without turning as they went. 13 In the middle of[a] the living creatures there was something that looked like burning coals of fire, like torches moving to and fro among the living creatures; the fire was bright, and lightning issued from the fire. 14 The living creatures darted to and fro, like a flash of lightning.

22 Over the heads of the living creatures there was something like a dome, shining like crystal,[c] spread out above their heads. 23 Under the dome their wings were stretched out straight, one towards another; and each of the creatures had two wings covering its body. 24 When they moved, I heard the sound of their wings like the sound of mighty waters, like the thunder of the Almighty,[d] a sound of tumult like the sound of an army; when they stopped, they let down their wings. 25 And there came a voice from above the dome over their heads; when they stopped, they let down their wings.

When I saw it, I fell on my face, and I heard the voice of someone speaking.

2 He said to me: Son of Man, stand up on your feet, and I will speak with you. 2 And when he spoke to me, a spirit entered into me and set me on my feet; and I heard him speaking to me..” 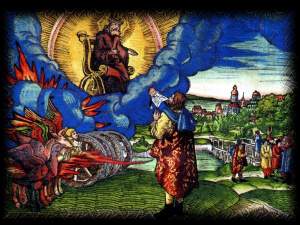 “Glory” was a technical term for the little of himself that God allowed human beings to see. So when Ezekiel calls his vision, “the APPEARANCE of the LIKENESS of the GLORY” he is saying, “This is not God. God is so far beyond imagination that this vision of mine is the merest glimpse of his being.”

Still, the vision of the divine chariot is marvellous.

It’s not drawn by horses, indeed it’s not drawn at all, for the living creatures and the chariot wheels are moved by the one spirit. This a symbol of the ease with which the Lord is present anywhere he wishes. The creatures themselves are cherubim, winged beings which the Israelites probably imported from Assyria, but the prophet sees them as representative of created life, ( the four faces) serving the creator in partnership with the technological miracle of the ancient world, the wheel.

The dome is the division between earth and heaven mentioned in Genesis, showing that what follows is in God’s realm. Although the vision of God is not of God but only of his glory, nevertheless the prophet boldly insists on the likeness of God to humanity (Genesis tells us that human beings are made in the likeness of God). The splendour that accompanies God’s revelation is in the form of the rainbow which is the traditional sign of God’s mercy.

The vision is told slowly so that the reader can savour every detail and understand its meaning. 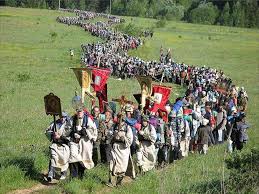 Of course the prophet throws himself on the ground before the overwhelming majesty of the vision. But this God will have no abject servants: “stand on your feet, Son of Man, and I will speak with you.” God wants people who can face him in the dignity of their creatureliness. Indeed his spirit lifts the prophet to his feet.

This is very sophisticated theology: a true sense of the majesty of God does not throw believers to their knees but rather lifts them up to take responsibility for their own lives in this world. I’m not a very religious person. In fact I think that religion, with all its rituals and special duties, may be an enemy of faith in God, who doesn’t like all that fiddle-faddle, but wants human commitment to his truth and justice.