WOMAN WHO CONVERTED TO CHRISTIANITY THREATENED WITH DEATH PENALTY IN KHARTOUM 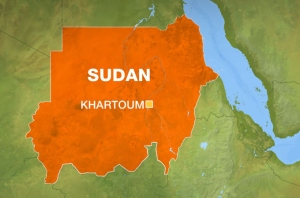 Ezekiel 11:14-25 New Revised Standard Version, Anglicised (NRSVA) God Will Restore Israel 14 Then the word of the Lord came to me: 15 Mortal, your kinsfolk, your own kin, your fellow exiles,[a] the whole house of Israel, all of them, are those of whom the inhabitants of Jerusalem have said, ‘They have gone far from the Lord; to us this land is given for a possession.’ 16 Therefore say: Thus says the Lord God: Though I removed them far away among the nations, and though I scattered them among the countries, yet I have been a sanctuary to them for a little while[b] in the countries where they have gone. 17 Therefore say: Thus says the Lord God: I will gather you from the peoples, and assemble you out of the countries where you have been scattered, and I will give you the land of Israel. 18 When they come there, they will remove from it all its detestable things and all its abominations. 19 I will give them one[c] heart, and put a new spirit within them; I will remove the heart of stone from their flesh and give them a heart of flesh, 20 so that they may follow my statutes and keep my ordinances and obey them. Then they shall be my people, and I will be their God. 21 But as for those whose heart goes after their detestable things and their abominations,[d] I will bring their deeds upon their own heads, says the Lord God. 22 Then the cherubim lifted up their wings, with the wheels beside them; and the glory of the God of Israel was above them. 23 And the glory of the Lord ascended from the middle of the city, and stopped on the mountain east of the city. 24 The spirit lifted me up and brought me in a vision by the spirit of God into Chaldea, to the exiles. Then the vision that I had seen left me. 25 And I told the exiles all the things that the Lord had shown me. I apologise to readers for the sketchy nature of these blogs. I only have very brief access to internet this week. Following the extracts from Ezekiel given by the Lectionary is difficult and maybe tiresome for readers because the material is so strange and requires explanation. Today I’ve chosen just to go to the heart of this comforting message announced by the prophet to the exiled Jews in Babylon. One day, he tells them, God will bring them or their descendants back to their land; and will transform them by giving them a new heart and spirit. This is described in these words: “I will remove the heart of stone from their flesh and give them a heart of flesh.” God restores people, not by turning them into angels but by making them human. People are deformed when their natural capacity for feeling is petrified by selfishness, arrogance and idolatry. They become able to disregard the needs and hurts of others and to disobey the humane laws of their God. All the biblical prophets are agreed that a material affluence which ignores the gifts of God and of fellow human beings leads to a demonic lack of compassion. God’s restoration of people gives them back their created nature-a heart that can feel for others and a spirit of community. If we find Ezekiel’s experience of the transcendent God a bit alien, we can reflect that it has given him a vision of human worth which is relevant to affluent societies today. Removing the hearts of stone may sound painful but it’s desirable surgery nevertheless for people of all faith traditions, not least the Islamic judiciary of Sudan.

Tags: removing the heart of stone, the evils of affluence