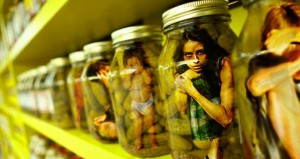 35 If any of your kin fall into difficulty and become dependent on you,[a] you shall support them; they shall live with you as though resident aliens. 36 Do not take interest in advance or otherwise make a profit from them, but fear your God; let them live with you. 37 You shall not lend them your money at interest taken in advance, or provide them food at a profit. 38 I am the Lord your God, who brought you out of the land of Egypt, to give you the land of Canaan, to be your God.

39 If any who are dependent on you become so impoverished that they sell themselves to you, you shall not make them serve as slaves. 40 They shall remain with you as hired or bound labourers. They shall serve with you until the year of the jubilee. 41 Then they and their children with them shall be free from your authority; they shall go back to their own family and return to their ancestral property. 42 For they are my servants, whom I brought out of the land of Egypt; they shall not be sold as slaves are sold. 43 You shall not rule over them with harshness, but shall fear your God. 44 As for the male and female slaves whom you may have, it is from the nations around you that you may acquire male and female slaves. 45 You may also acquire them from among the aliens residing with you, and from their families that are with you, who have been born in your land; and they may be your property. 46 You may keep them as a possession for your children after you, for them to inherit as property. These you may treat as slaves, but as for your fellow Israelites, no one shall rule over the other with harshness.

47 If resident aliens among you prosper, and if any of your kin fall into difficulty with one of them and sell themselves to an alien, or to a branch of the alien’s family, 48 after they have sold themselves they shall have the right of redemption; one of their brothers may redeem them, 49 or their uncle or their uncle’s son may redeem them, or anyone of their family who is of their own flesh may redeem them; or if they prosper they may redeem themselves. 50 They shall compute with the purchaser the total from the year when they sold themselves to the alien until the jubilee year; the price of the sale shall be applied to the number of years: the time they were with the owner shall be rated as the time of a hired labourer. 51 If many years remain, they shall pay for their redemption in proportion to the purchase price; 52 and if few years remain until the jubilee year, they shall compute thus: according to the years involved they shall make payment for their redemption. 53 As a labourer hired by the year they shall be under the alien’s authority, who shall not, however, rule with harshness over them in your sight. 54 And if they have not been redeemed in any of these ways, they and their children with them shall go free in the jubilee year. 55 For to me the people of Israel are servants; they are my servants whom I brought out from the land of Egypt: I am the Lord your God.

“no one shall rule over another with harshness”

This is part of the law for Jubilee Year which provided that every fiftieth year, property should be returned to its original ownership and slaves should be set free.This rests on the conviction that God is the true owner of the land, which he distributed to the clans of Israel, and of the Israeli people, who are his slaves. It’s not clear from scripture if this law was ever observed, and most scholars think it was an ideal of justice rather than a required practice.

An ideal of justice which permits foreigners to be enslaved and treated as property?

Probably this section of Leviticus was written after the exile of many Israeli’s in Babylon and was aimed at the Jewish people of the 5th century BCE. As far as I know, there is no record of any ancient society that prohibited slavery, so we should not be surprised at the the Israeli belief that God had given them permission to treat foreigners with less justice than they used towards each other. Nor should we look with condescension on the efforts of Jewish lawgivers to interpret the justice of God. This whole passage represents a concern for the poor, a desire to limit social inequality, and to base laws on the nature of God rather than the whim of a ruler.

Nevertheless, Christian people must not read this as if it were the word of God for them. How can I make this statement about the Holy Bible? Because I know that when it is viewed historically it is interesting and even challenging, but viewed as God’s command to me now it is mince (Scots= nonsense); and mince is mince no matter where it is found. As a Christian I must read the Old Testament in the light of the new; and must interpret all scripture in partnership with other believers and the Holy Spirit. This process leads me to identify certain bits of the Bible as mince. Such as its refusal of  equality to women and its condemnation of homosexuality.

Doesn’t that mean I just pick and choose? Well, yes, in a way. That’s what grown-up people do with books. We don’t place them on pedestals to be worshipped but on desks to be read and interpreted for our nourishment. The Bible is “holy” only as a witness to Jesus Christ, who is for me God’s revelation of his true character. We have to get as much as we can from the Bible, even from the bits that contain mince.

For example, we can see that that the defect in the theology above, namely that God is the God of Israel and not the God of all nations, leads directly to a law which says that Israelis cannot be enslaved but foreigners can. Believers can learn from this error that inadequate theology can led to bad practice. If we think God is the God of the USA or England more than he is the God of Iranians and Romanians, we can easily deny either of these latter nationalities equality with our own and believe we are doing God’s will.

Furthermore, the robust concern for social equality evident in this passage remains a challenge to any society that believes in the divinity of the free market.