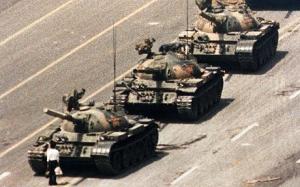 18-19 When Jesus had seen the great crowds around him he gave orders for departure to the other side of the lake. But before they started, one of the scribes came up to Jesus and said to him, “Master, I will follow you wherever you go.”

20 “Foxes have earths, birds in the sky have nests, but the Son of Man has nowhere to lay his head,” replied Jesus.

21 Another of his disciples said, “Lord, let me first go and bury my father.”

22 But Jesus said to him, “Follow me, and leave the dead to bury their own dead.”

23-25 Then he went aboard the boat, and his disciples followed him. Before long a terrific storm sprang up and the boat was awash with the waves. Jesus was sleeping soundly and the disciples went forward and woke him up. “Lord, save us!” they cried. “We are drowning!”

26-27 “What are you so frightened about, you little-faiths?” he replied. Then he got to his feet and rebuked the wind and the waters and there was a great calm. The men were filled with astonishment and kept saying, “Whatever sort of man is this—why, even the wind and the waves do what he tells them!”

In the three linked Gospels, Matthew, Mark and Luke, the incident of the storm is used as an image of the profound conflict between the ministry of Jesus and the forces of evil which oppose him. In the gospel narratives it stands as a kind of warning to his disciples of the cost of their discipleship: they should expect turmoil. Probably Mark was the first to compose the story, with Matthew and LUke using his version as the basis of their own.

The ship of God’s Kingdom, or we might call it the ship of faith, finds itself in a life-threatening storm, as indeed the Jesus enterprise was to find itself when he was arrested, tried and crucified. Jesus is described as “asleep” which is meant as an image of  death. The disciples call out to him in their fear and dismay. Jesus ansers by “rising” (badly translated above as “got to his feet”) just as he was believed to have done from death, and stills the storm.This tiny story-which modern readers might see as a dream-sequence-is really the whole gospel in a nutshell. Jesus, like the God of the Old Testament, controls the proud waves of the sea, which are a symbol of chaos. In this story the external chaos of waters in linked to the internal chaos of the disciples’ fears in a way which allows it to enter the psychological landscape of the reader: here are the storms which threaten my security; here are my desperate cries for help; here is the One who has been dead rising to help me and asking, “What are you so frightened about, you little – faith?” The skill of the gospel narrators annihilates the centuries and puts me in the boat with the other disciples.

Matthew and Luke preface the storm story with warning incidents in which Jesus emphasises the cost of disciupleship. He would have been a nightmare for his publicity agent: 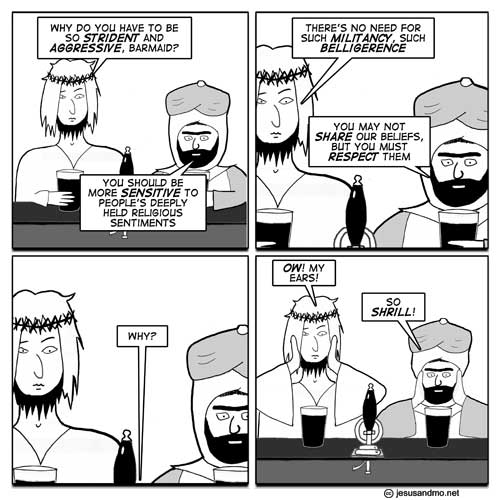 “Hey Jesus buddy, you have to get on line here, like ah buddy we-all have to sing from the same sheet, you listening, huh? These guys was jus’ giving you postive strokes there, jus’ giving you the big hello, an’ you kick their ass! Like our sponsors ain’t gonna shell out for stuff like that. Nossir! Like this is the real world Jesus an’ you gotta give some good religion, some happy-time tunes, buddy; an’ you can save your putdowns for some damn communist or Muslim, you get the message, Jesus? You realise you jus’ told a decent guy to bodyswerve his daddy’s stiff? You gotta get back to family values before they lynch you, bud.”

I can do this voice because sometimes, many times, it’s been my own. Why is the way of Jesus so unpopular with so many people? The same reason it’s unpopular with me; it neither flatters my ego nor feeds my flesh.