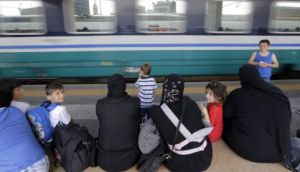 31 What are we to say, then, in the light of all this? If God is on our side, who can be against us? 32 God did not withhold his own Son, but gave him up on behalf of us all; will he not, then, with him, freely give us all things? 33 Who will bring a charge against any of God’s people? It is God who gives saving justice! 34 Who will condemn? It is Messiah who died! — or, rather, was raised from the dead, and who is now at God’s right hand and is even pleading on our behalf! 35 What will separate us from the love of the Messiah? Will trouble, or difficulty, or persecution, or hunger, or nakedness, or danger, or the sword? 36 Scripture says — ‘For your sake we are being killed all the day long, We are regarded as sheep to be slaughtered.’ 37 Yet amid all these things we more than conquer through him who loved us! 38 For I am persuaded that neither death, nor life, nor angels, nor archangels, nor the present, nor the future, nor any powers, 39 nor height, nor depth, nor any other created thing, will be able to separate us from the love of God revealed in Christ Jesus, our Lord!

Paul constructs a passionate celebration of God’s love in Messiah Jesus. For Paul, the love of God is never simply an attitude; it is always a deed, whether it is is his call to Abraham or his “not withholding his son” (as Abraham did not withhold Isaac from God) -these actions mean that Paul can call God “ho dikaion”, the One who puts right, who gives saving justice. God’s love is a a series of faithful actions, a process which renews creation in the face of human and transhuman powers of evil (the powers listed in verse 38). The background to this passage is the heavenly court as envisaged by the author of Job or maybe Zechariah, where the  Satan stands ready to condemn those whom God has chosen. In these stories the Satan is more like what we would call the devil’s advocate pointing out the weaknesses and faults of human beings. Paul insists that in this court it is God who takes the side of those who are slandered and put down by the Satan. God acquits them and makes them worthy of his trust. But  he does so in an extraordinary way-by giving his son to be the victim of human evil: it is Messiah who died! Jesus Messiah is the victim with the right to condemn but he stands in the heavenly court pleading the cause of humanity. In him the tit-for-tat of human evil is contradicted by faithful love which will stop at nothing.  Those who trust this love cannot be separated from it by any suffering, calamity or force of evil. The peoples of the Roman Empire were troubled by the “powers” which menaced humanity-the suffering of life, the certainty of death, the superhuman beings in space, the brevity of the moment, the threat of the future, the mysterious powers in the heavens, the influences of the heavenly bodies at zenith or nadir-all these enclosed and threatened humanity. There were religions which purported to give initiates the secret passwords which would allow their souls to pass through these powers to gain freedom. Paul asserts that none of these powers can come between human beings and God’s love shown in Jesus Messiah. Indeed those who trust this love will “hyper-conquer” -perhaps Paul had Roman “triumphs” in mind- in the face of all these threats.

23 Alas for you, teachers of the Law and Pharisees, hypocrites that you are! You pay tithes on mint, fennel, and caraway seed, and have neglected the weightier matters of the Law — justice, mercy, and good faith. These last you ought to have put into practice, without neglecting the first. 24 You blind guides, to strain out a gnat and to swallow a camel! 25 Alas for you, teachers of the Law and Pharisees, hypocrites that you are! You clean the outside of the cup and the dish, but inside they are filled with the results of greed and self-indulgence. 26 You blind Pharisee! First clean the inside of the cup and the dish, so that the outside may become clean as well. 27 Alas for you, teachers of the Law and Pharisees, hypocrites that you are! You are like whitewashed tombs, which indeed look fair outside, while inside they are filled with dead people’s bones and all kinds of filth. 28 It is the same with you. Outwardly, and to others, you have the look of religious people, but inwardly you are full of hypocrisy and sin. 29 Alas for you, teachers of the Law and Pharisees, hypocrites that you are! You build the tombs of the prophets, and decorate the monuments of religious people, 30 and say ‘Had we been living in the days of our ancestors, we should have taken part in their murder of the prophets! 31 By doing this you are furnishing evidence against yourselves that you are true children of the people who murdered the prophets. 32 Fill up the measure of your ancestor’s guilt. 33 You snakes and children of snakes! How can you escape being sentenced to Gehenna? 34 That is why I send you prophets, wise people, and teachers of the Law, some of whom you will crucify and kill, and some of whom you will scourge in your synagogues, and persecute from town to town; 35 in order that on your heads may fall every drop of innocent ‘blood split on earth,’ from the blood of innocent Abel down to that of Zechariah, Barachiah’s son, whom you murdered between the Temple and the altar. 36 All this, I tell you, will come home to the present generation. 37 Jerusalem! Jerusalem! She who slays the prophets and stones the messengers sent to her — Oh, how often have I wished to gather your children around me, as a hen gathers her brood under her wings, and you would not come! 38 Verily, your house is left to you desolate! 39 For nevermore, I tell you, will you see me, until you say — ‘Blessed is He who comes in the name of the Lord!’”
In this passage we can see the “saving justice of God” exercised by Jesus the victim. Here the enemy is corrupt religion which imprisons people in authoritarian legalisms amd maintains its power by violence.( I noted yesterday that we should not think that Jesus included all Pharisees in his denunciation).  This kind of power is a besetting sn of organised religion and can be seen,for example in neo-conservative forces in the USA and in many forms of jihadist Islam today. The justice of Jesus means a savage public exposure of their hypocrisy, so that other victims may take heart. Jesus will not oppose violence with violence; he will accept the consequences of his truth-telling; in his dying he will forgive his killers; but his death will be an even more powerful exposure of religious power than his words. Here is the Messiah who stands in the heavenly court to plead the cause of those persecuted by the powers of evil-and even to plead the cause of the persecutors (such as Saul/ Paul the Pharisee) if they recognise their wrongdoing.
Notice how the outspoken victim who delivers the denunciation of evil power is also Mother Wisdom, who wnats to gather her people as the hen gathers her chicks. How can the rejected, solitary victim gather anyone? Under what wings? From my own experience of life I want to say that only the victim has wings broad enough to gather humanity; that only the justice of the victim can save.

Tags: Jesus the Hen, nothing can separate us from the love of Christ, the justice of the victim