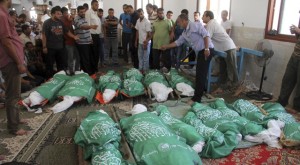 47 And, while he was still speaking, Judas, who was one of the Twelve, came in sight; and with him was a great crowd of people, with swords and clubs, sent from the chief priests and elders of the people. 48 Now the betrayer had arranged a signal with them. “The man whom I kiss,” he had said, “will be the one; arrest him.” 49 So he went up to Jesus at once, and exclaimed: “Welcome, Rabbi!” and kissed him; 50 at which Jesus said to him: “Friend, do what you have come for.” The men went up, seized Jesus, and arrested him. 51 Suddenly one of those who were with Jesus stretched out his hand, and drew his sword, and striking the high priest’s servant, cut off his ear. 52 “Sheathe your sword,” Jesus said, “for all who draw the sword will be put to the sword. 53 Do you think that I cannot ask my Father for help, when he would at once send to my aid more than twelve legions of angels? 54 But in that case how would the scriptures be fulfilled, which say that this must be?” 55 Jesus at the same time said to the crowds: “Have you come out, as if after a robber, with swords and clubs, to take me? I have sat teaching day after day in the Temple Courts, and yet you did not arrest me.” 56 The whole of this occurred in fulfillment

of the Prophetic scriptures. Then the disciples all forsook him and fled.

As Giotto, whose “Arrest of Jesus” is at the top of my blog every day, realised so wonderfully, Judas’ betrayal is an intimate thing. Jesus has chosen this man as a key disciple, as one of the “rulers of the new Israel”, he has loved him and trusted him; perhaps also, as the gospels tell us, he has seen him become an enemy. The gospels give the reader no insight into Judas’ motivation: he is simply “Judas Iscariot” who also betrayed him”. Giotto does not look for trivial psychological explanations. He sets the two men in opposition to each other, in front of their respective “troops”, yet united by the intimate gesture of Judas’ treacherous kiss. Jesus is unyielding; he knows what is happening; and in that moment so does Judas, caught in Jesus’ gaze like a rabbit in the headlights.

Matthew, whose narrative follows Mark’s, is at pains to emphasise:

1. Jesus’ refusal of violence, which he insists should be observed by his followers. Violence begets violence. This teaching should be taken very seriously by Christian communities.
2. Jesus’ conscious fulfilment of scripture, in this case the scriptures about God’s servant in Isaiah 40-55, especially Isaiah 53. This does not signal some kind of predestination of Jesus’ life but rather provides an insight into Jesus’ use of biblical tradition as a model for his ministry.
3. Jesus’ calm authority and his ironical scorn for this night-time arrest. Of course he knew that the authorities could not dare to arrest him openly.

The flight of the disciple is clearly noted. The story of Peter’s particular betrayal will follow. So where did the first believers get their story of Jesus’ trial and

crucifixion? Mark and Matthew mention that a number of women disciples kept faith and were present at his death. Of course many bible scholars will dismiss this question because they assume that the whole story of Jesus’ suffering has been pieced together from bible prophecy and has only the most general kind of historical truth. There’s no doubt that prophecy has influenced the story but it may also be that the core of the crucifixion story rests on the inadmissable evidence of a group of women. That would be in acccodance with Jesus’ concern for the “least important” and theirs for him.