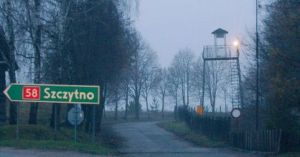 11 Meanwhile Jesus was brought before the Roman Governor. “Are you the king of the Jews?” asked the Governor. “It is true,” answered Jesus. 12 While charges were being brought against him by the chief priests and elders, Jesus made no reply. 13 Then Pilate said to him: “Don’t you hear how many accusations they are making against you?” 14 Yet Jesus made no reply — not even a single word; at which the Governor was greatly astonished. 15 Now, at the feast, the Governor was accustomed to grant the people the release of any one prisoner whom they might choose. 16 At that time they had a notorious prisoner called Barabbas. 17 So, when the people had collected, Pilate said to them: “Which do you wish me to release for you? Barabbas? Or Jesus who is called ‘Christ’?” 18 For he knew that it was out of jealousy that they had given Jesus up to him. 19 While he was still on the Bench, his wife sent this message to him — “Do not have anything to do with that good man, for I have been very unhappy today in a dream because of him.” 20 But the chief priests and elders persuaded the crowds to ask for Barabbas, and to kill Jesus. 21 The Governor, however, said to them: “Which of these two do you wish me to release for you?”

“Barabbas,” they answered. 22 “What then,” Pilate asked, “should I do with Jesus who is called ‘Christ?’ “Crucify him,” they all replied. 23 “Why, what harm has he done?” he asked. But they kept shouting furiously: “Crucify him!” 24 When Pilate saw that his efforts were unavailing, but that, on the contrary, a riot was beginning, he took some water, and washed his hands in the sight of the crowd, saying as he did so: “I am not answerable for this bloodshed; you must see to it yourselves.” 25 And all the people answered: “His blood be on our heads and on our children’s!” 26 The Pilate released Barabbas to them; but Jesus he scourged, and gave him up to be crucified.

Doubtless there is justification for the Open English Bible’s translation of verse 11 above where Jesus reply in Greek is “su legeis” = you say, which most translators have considered a noncomittal reply, “So you say.” If Jesus did accept the title “king of the Jews” from Pilate, the rest of Pilate’s behaviour is inexplicable. Obviously a Roman governor would have to take action againsty anyone who claimed such power. A noncomittal reply would also be more in keeping with Jesus’ silence in the face of other accusations. 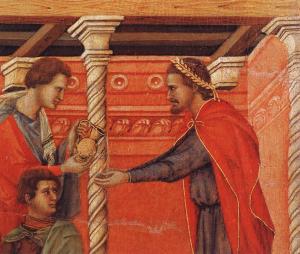 Matthew’s picture of Pilate goes towards exonerating the Romans and putting all the blame for Jesus’ crucifixion on the Jewish leaders and the crowd. Although it’s clear that Jesus opponents were from amongst the leadershipof his own people, we may question if a Roman official could be as easily pushed as Pilate is shown to be here. The incident of the washing of hands and the acceptance by the Jewish crowd of blood-guilt for the death of Jesus is only found in Matthew’s account. It adds a racial element to the guilt which we should probably find disturbing in view of repeated Christian perscutions of Jewish people throughout history.

Let’s imagine that some Christian story -teller added this picturesque detail to the story of Jesis’ crucifixion, and that Matthew gave it a place in his gospel, which subsequently became part of holy scripture for the Christian church. If so, a small imaginative mistake had appalling consequences over two millennia. It’s easy to see why atheists denounce all religion as dangerous. In this case the problem is the definition of scripture. If the text of scripture is viewed as inerrant and authoritative,  it can easily be used as an excuse for persecution because the perpetrators can hide behind it. Christian believers should be sure that any scripture which seems to justify abhorrent actions is in error. The church chose its holy scriptures and is resposnsible for their content. Obeying orders from scripture is no more an excuse than obeying orders from Nazi superiors.

Am I saying that the Bible is not important as a guide for Christian living? That would be a strange position for someone writing their 1382 nd Bible blog! I believe the Bible is a guide to faith and life, but it is a human book containing human errors. It can only become a “word of God” when its humanity is taken with ultimate seriousness, that is, when it is studied and interpreted with all the tools available for the understanding of any human text. My persistent blogging is a tiny part of the process by which the church community interprets its scripture under the guidance of the Holy Spirit. In John’s gospel Jesus calls this the “Spirit of Truth” who leads followers of Jesus into “complete truth.”  But we can only be inspired by the Spirit of Truth to the extent that we are open to the truth about our own lives.

So the interpretation of scripture is a tough calling.

Tags: Jesus and Pilate, the humanity of scripture, washing hands