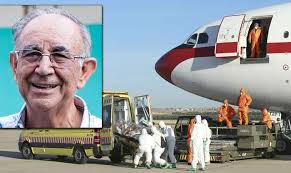 Now, when the Master heard that the Pharisees had been told that he was making and baptizing more disciples than John 2 (Though it was not Jesus himself, but his disciples, who baptized), 3 he left Judea, and set out again for Galilee. 4 He had to pass through Samaria, 5 and, on his way, he came to a Samaritan town called Shechem, near the plot of land that Jacob gave to his son Joseph. 6 Jacob’s Spring was there, and Jesus, being tired after his journey, sat down beside the spring, just as he was. It was then about midday. 7 A woman of Samaria came to draw water; and Jesus said to her — “Give me some to drink,” 8 For his disciples had gone into the town to buy food. 9 “How is it,” replied the Samaritan woman, “that you who are a Jew ask for water from a Samaritan woman like me?” (For Jews do not associate with Samaritans). 10 “If you knew of the gift of God,”replied Jesus, “and who it is that is saying to you ‘Give me some water,’ you would have asked him, and he would have given you ‘living water’.”

11 “You have no bucket, Sir, and the well is deep,” she said; “where did you get that ‘living water?’ 12 Surely you are not greater than our ancestor Jacob who gave us the well, and used to drink from it himself, and his sons, and his cattle!”

15 “Give me this water, Sir,” said the woman, “so that I may not be thirsty, nor have to come all the way here to draw water.”

19 “I see, Sir, that you are a prophet!” exclaimed the woman. 20 “It was on this mountain that our ancestors worshiped; and yet you Jews say that the proper place for worship is in Jerusalem.”

21 “Believe me,”replied Jesus, “a time is coming when it will be neither on this mountain nor in Jerusalem that you will worship the Father. 22 You Samaritans do not know what you worship; we know what we worship, for salvation comes from the Jews. 23 But a time is coming, indeed it is already here, when the true worshipers will worship the Father spiritually and truly; for such are the worshipers that the Father desires. 24 God is Spirit; and those who worship him must worship spiritually and truly.”

25 “I know,” answered the woman, “that the Messiah, who is called the Christ, is coming; when once he has come, he will tell us everything.” 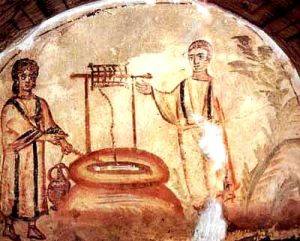 Early Chhristian image of Jesus and woman at the well

This beautiful story plays with a bits of Jewish material which may not be obvious to the modern reader:
1. God (and his Messiah) is often depcted as the bridegroom of Israel.
2. Israel is the God-given name of Jacob who gave the spring to the people.
3. The spring or well is the place where women come to get water and may meet with strangers. It is a place of courtship.
4. The Samaritans like the Jews held the 5 books of Moses to be scripture but disagreed on many other matters, for example, the location of the true temple.

With these in mind we can see that the traditional teasing between male and female becomes a teasing out of what is important in faith and life, leading to a revelation of the strangers’s true identity, which is even more unexpected than might be expected in such a case.

The story is carefully paced allowing the reader time to follow the process by which Jesus “woos” the Samaritan woman. He begins by asking for a drink of water. This is a traditional move which tests the woman’s courtesy(read the story in Genesis 24). The woman indicates she’s not sure what Jesus is at. He then refers to living water, which wll satisfy thirst forever. The woman jokes that this will spare her the trip to the spring. Jesus counters by asking her to come back with her husband, and then reveals that she’s had five husbands and is not married to the man she lives with.

All this is to say that Jesus offers an inextinguishable source of life to a woman whose marital situation mirrors the religious situation of her people. (5 husbands=5 books of Moses). He also offers a new way of worship not based on temple ritual but on the spirit of God. Baptism is mentioned at the start of the story and lies behind the symbolism of living water and the mention of the Spirit.

When the woman responds by referring all religious matters to the Messiah who will come one day, Jesus reveals his identity in the astonishing words, “I am”, Ego Eimi in Greek, which is the name by which God identifies himself to Moses (Exodus 3). This is of course a claim to be the Messiah but it also expresses Jesus identification with God as the Son who perfectly obeys the Father’s commands. The whole of John’s Gospel is an extended meditation on Jesus as the “I am”- ( I am the light of the world, I am the way the truth and the life, I am the resurrection and the life ect).

Jesus is revealed in the story as the overflowing life of God offered to the world and yet he reamins also the thirsty man who chats up a local woman at the village well. The story invites its readers or hearers to substutute themselves and their community for the Samaritan woman and her community, and to be courted by Jesus who reveals his truth and their truth simultaneously. The woman later tells her people, “This man told me everything I had done!”

The word John uses for “truth” means un-concealment. God’s unconcealment in Jesus requires my own unconcealment so that I can receive the gift of overflowing life. I’ve struggled with that all my life. Often, especially with regard to how others see me, I would prefer to maintain a righteous persona which masks my unrighteous self. Maybe it’s only in worship and in this daily blogging that I can let the mask drop in Jesus’ presence. Indeed, maybe this daily blogging is my own continuing conversation with Jesus at the spring.