The readings are from the Catholic lectionary for daily mass, while the headlines are chosen to keep me in touch with reality.

The (robot) dogs of war

Paul with Timothy and Titus had brought the good news of Jesus Messiah to the Galatians, a Celtic tribe related to the Gauls and the British Celts. As their original teacher he claims the right to exclude what he regards as harmful versions of the good news, in this case probably a kind of Judaistic version which emphasised both the ritual and moral reqirements of the Jewish Torah. There’s a perfectly good logic in Paul saying, “It was my teaching that converted you; the teaching you’re now getting is incompatible with what you received.” But is he justified in arguing that his teaching is directly from God, by a revelation of Jesus Messiah? Well, as he goes on to explain, it was this “revelation” which turned his life around and led him to regard his Jewish inheritance as “mere trash” in comparison. That certainly explains why Paul thinks it’s the only truth for him, but it doesn’t quite justify his claim that his gospel comes directly from God:

1. That claim ignores the person to whom the revelation came and through whom it can be transmitted to others, namely himself, Paul of Tarsus. God’s truth may come to people but it is always affected by their understanding of it, for their own lives and for others’. Paul woud not have agreed that the mere claim to divine revelation justified his opponents’ teaching -indeed, he probably attacks such a claim in his Corinthian correspondence (2 Cor 10-13).

2. It also ignores how the revelation came. It must have been the case that Paul was decisively influenced to understand the crucified Messiah through the witness of the believers whom he persecuted. Their faith in the face of suffering must have made an impression on him. Yet he never credits them with any contribution to his conversion but points only to God. We can I think, question Paul’s witness in this regard.

Paul’s best answer to the question of his authority came when he paid attention to these omissions and realised that his only authority came from his weakness and suffering, which doubtless gave authority also to those he’d persecuted, and which was anchored in the witness of the crucified Messiah Jesus. Readiness to suffer in order to communicate God’s love is the one authority possessed by the church and its evangelists. Simply appealing to a divine revelation is not enough as plenty nutters down the centuries have done that, bringing different kinds of nonsense into the Christian tradition. Pope Pius 12th’s dogma of the Bodily Assumption of the Virgin Mary is one case in point, the Quaker assertion of the infallibility of the “inner light” is another.

Even readiness for martyrdom is not a guarantee of teaching authority, otherwise we could settle the question of Roman Catholic v Reformed teaching by totting up the number of martyrs on either side of their mutual intolerance.

Paul also realised that his conviction that the community of Jesus Messiah included Gentiles without inposing Torah upon them, also meant that he and his Gentile churches had to relate to the convictions of the more “Jewish” churches. Out of an “ecumenical” meeting in Jerusalem there came a reasonable compromise which allowed for new developments while preserving peace and unity.

This remains the best model for settling differences in Christian teaching. 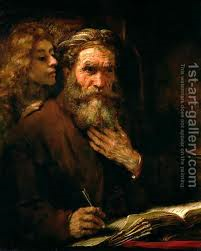 the guidance of the spirit:
Matthew and the Angel, Rembrandt

1. Church assemblies or their representatives should gather as equal children of God, open to the guidance of the Holy Spirit.

3. Love for each other, for the world and for God should impose the discipline of rational argument on all.

4. Agreement should be sought but in cases of urgency a vote may be used. All believers should respect the result.

Such methods however,adjudicate on issues raised by those such as Paul who are convinced that God has guided them in new ways. Judicious consideration is only valuable if there are passionate pioneers to pose the questions.

Recently I’ve taken part in “Scriptural Reasoning” a programme of Cambridge University (open to all), which asks participants to reflect on scriptures from the Jewish, Christian and Islamic traditions. I found the contributions of my fellow searchers for truth very helpful and moving.