The readings are from the catholic lectionary for daily mass, while the headlines are meant to keep mythinking real:

The heavens proclaim the glory of God,
and the firmament shows forth the work of his hands.
Day unto day takes up the story
and night unto night makes known the message.

No speech, no word, no voice is heard
yet their span extends through all the earth,
their words to the utmost bounds of the world.

These few verses from Psalm 19 are used on the Saints’ Day of St, Simon and St Jude which many branches of the Christian church celebrate today. They are called “Apostles” that is, messengers. But the first section of this Psalm states that the creator God needs no human messengers because the universe itself bears silent and comprehensive witness to its Creator.

Modern cosmology, which has exposed the incomprehensible extent of the universe as never before, while demonstrating that all its elements obey the same laws, has increased the scope of faith in the creator God. The vastness and intricacy of the universe (or universes) point towards the wisdom of the One who is beyond all worlds. As a lover of physics, quantum  physics and astro-physics, I am dismayed at how seldom Christian theology and preaching touches on the rich discoveries of these sciences, but instead views them fearfully as if they were opposed to Christian truth, or at best, another kind of truth that believers don’t need to consider.

This is also true of life sciences,  especially those that contribute to the theory of evolution. On the wilder shores of Christian loopiness, children of believers are not given access to this theory in their school syllabus. While some exponents of evolutionary science, like Richard Dawkins have incompetently tried to turn their sciences into refutations of faith, believers should find in the evolutionary story the signs of God’s wisdom. The facts as we know them are never the enemy of faith; the facts are friendly, God is the facts. To be sure, the scientific story of life on earth, as yet incomplete, challenges believers to see the hand of God in a process which has many cul -de-sacs and innumerable extinctions. That may be a tough assignment but believers must hold to their faith in one God and one truth. There are not two truths- one of faith and the other of  science- existing side by side with no points of contact. As faith and science seek an understanding of the universe they should listen to each other. The heavens proclaim the glory of the Lord.

Jesus went out into the hills to pray; and he spent the whole night in prayer to God. When day came he summoned his disciples and picked out twelve of them; he called them ‘apostles’: Simon whom he called Peter, and his brother Andrew; James, John, Philip, Bartholomew, Matthew, Thomas, James son of Alphaeus, Simon called the Zealot, Judas son of James, and Judas Iscariot who became a traitor.

One of the challenges of New Testament scholarship is to reconcile the lists of apostles as found in the gospels of Matthew Mark and Luke. You might have thought that there would be no discrepancies in a matter of such importance, but the fact that there are suggests that perhaps the existence of the “Twelve” had become much less inportant in the first churches as time went by. That indeed, seems to have been the case. The existence of the Twelve had symbolic and historical importance in the early church, but as an institution it ceased to matter, and about most of Twelve the second generation of believers had very little knowledge.

All we know about Simon is his name and nick-name. Zealots were Jewish freedom fighters who propmoted rebellion against Rome, with disastrous results in CE 70 and 135. The word is used by the historian Josephus in his “History of the Jewish Wars,” but it is not known if the Zealots existed as a coherent movement in the time of Jesus. Those who showed “zeal for the Lord” were recognised by their fierce opposition to any contamination of Jewish faith and practice by any foreign elements. Maybe Simon had belonged to a Zealot group, or maybe his nick-name, like the other Simon’s, was given by Jesus as a joke. Maybe he was a bit of a stickler for Jewish Torah, or inclined to be aggressive to Romans, and was therefore called the Zealot, just as the other Simon, known to be a bit flaky, was called the Rock.

Jude appears in Luke’s list, but his place in the list is given to Thaddeus in Mark and Matthew, although some manuscripts of Matthew give the name Lebbaeus. Nothing is known of him except that John’s gospel quotes him as asking Jesus a question. 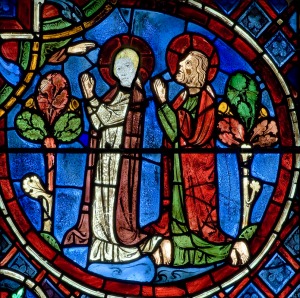 The Twelve were probably appointed by Jesus as a symbol of the twelve tribes of Isael, and maybe therefore of the new or reformed Israel that Jesus wanted to call into existence. They are called both disciples, that is those who learn from Rabbi Jesus, and Apostles, that is, messengers sent out by Jesus to call or recall his people to their true identity under God. That may explain why the institution of the Twelve ceased to exist fairly soon after Jesus’ death. When that event came to be seen as a decisive rejection of Jesus by his own people, the vocation of the Twelve was also nullified.

The very sketchiness of biblical information about the twelve may be a sign of its authenticity: the instutution had ceased to have direct relevance, but the memory of the original messengers remained.

So all we know about Simon and Jude is that a) they learned from Jesus and b) they were messengers of his gospel. (Jesus knew that God’s acts of creation need to be interpreted. His messengers were to encourage people to interpret them as acts of love). Those two tasks are still a reasonable definition of what it means to be a Christian believer. With that in mind, we can raise a prayer, or a glass, or both, for Simon and Jude today