The readings are from the catholic lectionary for daily mass while the headlines are meant to keep my thinking real:

“USE REASON TO EXAMINE SCRIPTURE AND CLERGY” – DALAI LAMA

But whatever was to my profit, I now reckon as loss, for the sake of Messiah. In fact I’m ready to reckon everything as loss, compared with the extraordinary privilege of knowing Messiah Jesus, my Lord, for whom I’ve been completely bankrupted. I reckon it all as rubbish, so that I may profit from him.

This is my own translation which tries to bring out some of Paul’s exasperation at the teachers who demanded Torah obedience, including circumcison of males, from believers in Jesus. The purpose of the Torah, in Paul’s view, had been fulfilled by Jesus’ perfect obedience, while those who wanted to hold to the Torah had turned him over to the Gentiles to be crucified. For Paul this meant that Jesus had brought the Torah and its requirements to an end. The place of the Torah in Paul’s communities was taken by the “Spirit” by which I think he means a radical openness to God and one’s believing community, a sense of shared life which came through commitment to Jesus Messiah.

That’s why Paul views the knowledge of Jesus as an extraordinary privilege in comparison with which his Torah achievements are mere rubbish. He sees the Torah now as a racial, flesh and blood religion, (with literal flesh and blood requirements) while faith in Jesus creates a new humanity enlivened by the divine spirit. For him genuine circumcision as the mark of being chosen by God, is the gift of the Spirit, while the cutting of the male foreskin has become mere ex-cision, that is, snipping. At one point Paul’s exasperation with his opponents leads him to suggest that they should just cut off the whole organ. 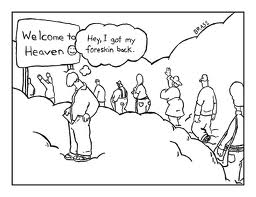 The langauge of profit and loss is crucial in this passage and matches his language about Jesus as downwardly mobile. Just as Jesus has abandoned divine status to becme a servant, so Paul has abandoned apparent profit (status  under Torah) to become “bankrupt” as a messenger of Jesus. Perhaps because Paul knew in himself the allure of status and the arrogance of religious achievement, his writing is never far away from depicting pride as the root of sin, and the crucified messiah as the remedy for it. As someone who knows where his arrogance has led him, I’m always grateful for Paul’s insight.

GOSPEL LUKE 15:1-10 ©
The tax collectors and the sinners were all seeking the company of Jesus to hear what he had to say, and the Pharisees and the scribes complained. ‘This man’ they said ‘welcomes sinners and eats with them.’ So he spoke this parable to them:
‘What man among you with a hundred sheep, losing one, would not leave the ninety-nine in the wilderness and go after the missing one till he found it? And when he found it, would he not joyfully take it on his shoulders and then, when he got home, call together his friends and neighbours? “Rejoice with me,” he would say “I have found my sheep that was lost.” In the same way, I tell you, there will be more rejoicing in heaven over one repentant sinner than over ninety-nine virtuous men who have no need of repentance. 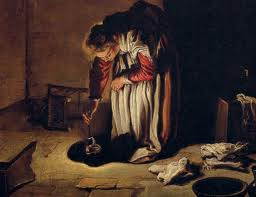 ‘Or again, what woman with ten drachmas would not, if she lost one, light a lamp and sweep out the house and search thoroughly till she found it? And then, when she had found it, call together her friends and neighbours? “Rejoice with me,” she would say “I have found the drachma I lost.” In the same way, I tell you, there is rejoicing among the angels of God over one repentant sinner.’

The upholders of religious status and authority were offended by Jesus’ happy association with “sinners”, that is, people in serious negelct of the Torah. Jesus made no attempt to argue about Torah but simply indicated through vivid parables, the joy of God in “finding” a lost person. God it would seem is not impressed with “virtuous men who (think they) need no repentance, but appreciates the sinners who turn to him. Even more, God will apparently neglect the righteous in order to hunt the sinner!

This scandalous teaching is at one with Jesus’ scandalous behaviour and remains offensive to all who imagine that their social, moral or religious status – including the status of “being saved”- should earn them divine approval.