“THE NEEDS OF COMMON PEOPLE ARE THE MOST IMORTANT” -PATTI SMITH

Revelation /Apocalypse 10:8-11 ©
I, John, heard the voice I had heard from heaven speaking to me again. ‘Go,’ it said ‘and take that open scroll out of the hand of the angel standing on sea and land.’ I went to the angel and asked him to give me the small scroll, and he said, ‘Take it and eat it; it will turn your stomach sour, but in your mouth it will taste as sweet as honey.’ So I took it out of the angel’s hand, and swallowed it; it was as sweet as honey in my mouth, but when I had eaten it my stomach turned sour. Then I was told, ‘You are to prophesy again, this time about many different nations and countries and languages and emperors.’

The prophet and author of the Revelation, who identifies himself as John, exiled on Patmos for his faith in Jesus, gives us this little picture of the prophetic task. The open scroll represents God’s message of  rescuing justice which John is asked to announce. It is a universal message which will affect the peoples of the world and their rulers. That will make it dangerous.

The eating of the scroll is based on Ezekiel chapter 3, and identifies John with a great predecessor who found the message “sweet in his mouth.” Of course it should taste sweet as it speaks of the victory of God’s goodness. But it is sour in the stomach, according to John, because the goodness wins by way of the cross, which involves suffering for God’s people and perhaps especially for his prophets.

The victory of God’s goodness won through God’s presence in the crucified Jesus and in those who follow Him, is the central paradox of Revelation. It is a bitter/sweet story because evil is defeated by courageous suffering, which is only abolished when God wipes away all tears from all eyes. 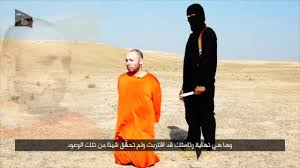 How will the terrorist organisation called Islamic State be defeated? If the USA and UK were to mount an operation of overwheming force to wipe it out, would that do the job? No it wouldn’t, for there would be a new generation of Islamic jihadists ready to take its place, convinced that only brutality could oppose the power of their infidel enemies. No, it is much more likely to be defeated by the example of those they have executed, the good people who have given their lives for humanitarian purposes or to report the facts of the conflict. Only the suffering of people who do not hate their enemies can have any effect on this kind of evil. That’s not to say we should not try to find ways of restraining them, but rather to highlight the way of Jesus as the only way that can expose this evil for what it is and overcome it. Now that’s a bitter/sweet message.
Gospel

Luke 19:45-48 ©
Jesus went into the Temple and began driving out those who were selling. ‘According to scripture,’ he said ‘my house will be a house of prayer. But you have turned it into a robbers’ den.’

He taught in the Temple every day. The chief priests and the scribes, with the support of the leading citizens, tried to do away with him, but they did not see how they could carry this out because the people as a whole hung on his words.

This is Jesus’ most public takeover bid for leadership of his people. Prophets had looked forward to the day when the Lord would suddenly come back to his temple to establish justice. Luke’s Jesus is not careful to distinguish himself from God in his words about “my house”. Prophecies of God’s return of course were interpreted as meaning divine justice FOR Jewish people OVER their enemies. The justice was not meant to confront Jewish sins, as Jesus did. 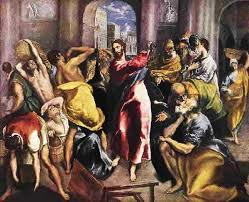 Jesus valued prayer. Luke records him as going to a lonely place to pray. Jesus’ Father delights in the conversation of his children. It is the corruption of that free relationship by commercial interests approved by the religious establishment, that led to Jesus’ forceful action. Gaining profit or power in the name of God was denounced by the prophets and by Jesus. His action in the temple is a permanent challenge to his church and especially to its salaried clergy like me.