20 I saw an angel come down from heaven, carrying the key to the deep pit and a big chain. 2 He chained the dragon for a thousand years. It is that old snake, who is also known as the devil and Satan. 3 Then the angel threw the dragon into the pit. He locked and sealed it, so that a thousand years would go by before the dragon could fool the nations again. But after that, it would have to be set free for a little while.

4 I saw thrones, and sitting on those thrones were the ones who had been given the right to judge. I also saw the souls of the people who had their heads cut off because they had told about Jesus and preached God’s message. They were the same ones who had not worshiped the beast or the idol, and they had refused to let its mark be put on their hands or foreheads. They will come to life and rule with Christ for a thousand years.

5-6 These people are the first to be raised to life, and they are especially blessed and holy. The second death[a] has no power over them. They will be priests for God and Christ and will rule with them for a thousand years.

No other dead people were raised to life until a thousand years later.

7 At the end of the thousand years, Satan will be set free. 8 He will fool the countries of Gog and Magog, which are at the far ends of the earth, and their people will follow him into battle. They will have as many followers as there are grains of sand along the beach, 9 and they will march all the way across the earth. They will surround the camp of God’s people and the city that his people love. But fire will come down from heaven and destroy the whole army. 10 Then the devil who fooled them will be thrown into the lake of fire and burning sulfur. He will be there with the beast and the false prophet, and they will be in pain day and night forever and ever.

The Judgment at the Great White Throne

11 I saw a great white throne with someone sitting on it. Earth and heaven tried to run away, but there was no place for them to go. 12 I also saw all the dead people standing in front of that throne. Every one of them was there, no matter who they had once been. Several books were opened, and then the book of life[b] was opened. The dead were judged by what those books said they had done.

The visions take the reader rapidly towards the victory of God’s goodness. Firstly the originating power of evil is defeated and restrained, then the people whop had resisted it are rewarded. Eventually the power of evil and its human adherents is completely vanquished and destroyed along with the power of death. Only those whose “names are in the book of life” are rewarded with life in God’s city.

The details of some of this are obscure to me – I’m not sure what the 1000 years are for- but the main picture is clear: those who have worked for death will get it, while those who have worked for life will enter into it. In a sense, God simply gives people, and the powers that rule people,what they have chosen. There remains a mystery as to why anyone should choose death rather than life. Perhaps the author would have ascribed this human choice to the persuasion of Satan, the Beast and the False Prophet, but that would just push the mystery one stage further back. Why do these powers exist?

That mystery is linked to another: why does God have to win his victory through his own suffering in the Lamb and in his faithful human servants? The book of Revelation does not answer these questions. Its author was content with the victory of the Lamb of God, which leads, as we shall see in the next chapter, to new heavens and a new earth.

The detail of beheaded victims getting their heads back is especialy poignant in view of recent executions carried out by the so-called Islamic State. There is something viscerally disrespectful about the deliberate decapitation of a person which God recognises and reverses. G.K Chesterton was struck by this detail:

The happy men who lose their heads

they find their heads in heaven

with angel eyes and angel wings

and angel haloes even.

Leaving the purple fields behind

the angel wings beat down the wind

back to the groping body and blind

as the bird back to the tree.

…..Is there not pardon for the brave

and broad release above

who lose their heads for liberty

or lose their hearts for love?

Or is the wise man wise indeed

made strong to play the saner part

and only lose his soul?
Gospel

Luke 21:29-33 ©
Jesus told his disciples a parable: ‘Think of the fig tree and indeed every tree. As soon as you see them bud, you know that summer is now near. So with you when you see these things happening: know that the kingdom of God is near. I tell you solemnly, before this generation has passed away all will have taken place. Heaven and earth will pass away, but my words will never pass away.’ 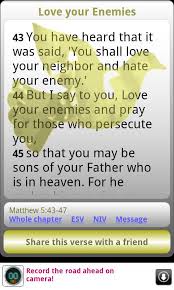 The first three Gospels present different versions of the “prophecy of Jesus” but they all look towards a catastrophe which will change the world. This is conveyed in cosmic images of destruction as well as more familiar images of human suffering. Probably the histrorical disaster of the Roman destruction of the Jerusalem Temple, which had taken place before the writing of the gospels, was in the minds of the gospel writers. Jesus counselled his followers that terrible events were signs of the nearness of God’s Rule rather than of its distance. For them the important thing was to hang on to Jesus’ teaching in the midst of changes. (Heaven and earth passing away means profound change rather than the end of everything). People who become obsessed with “signs of the end” to the neglect of daily discipleship are doing the exact opposite of what Jesus recommended. Wise people will always be able to see where worldly events are heading but even in God’s Rule Jesus’ words must be obeyed. In fact, obedience to Jesus’ words is the meaning of God’s Rule.