First reading
Genesis 3:9-15,20 ©
After Adam had eaten of the tree the Lord God called to him. ‘Where are you?’ he asked. ‘I heard the sound of you in the garden;’ he replied ‘I was afraid because I was naked, so I hid.’ ‘Who told you that you were naked?’ he asked ‘Have you been eating of the tree I forbade you to eat?’ The man replied, ‘It was the woman you put with me; she gave me the fruit, and I ate it.’ Then the Lord God asked the woman, ‘What is this you have done?’ The woman replied, ‘The serpent tempted me and I ate.’

Then the Lord God said to the serpent, ‘Because you have done this,

‘Be accursed beyond all cattle,

You shall crawl on your belly and eat dust

every day of your life.

I will make you enemies of each other:

you and the woman,

It will crush your head

and you will strike its heel.’

The man named his wife ‘Eve’ because she was the mother of all those who live.
Gospel

Luke 1:26-38 ©
The angel Gabriel was sent by God to a town in Galilee called Nazareth, to a virgin betrothed to a man named Joseph, of the House of David; and the virgin’s name was Mary. He went in and said to her, ‘Rejoice, so highly favoured! The Lord is with you.’ She was deeply disturbed by these words and asked herself what this greeting could mean, but the angel said to her, ‘Mary, do not be afraid; you have won God’s favour. Listen! You are to conceive and bear a son, and you must name him Jesus. He will be great and will be called Son of the Most High. The Lord God will give him the throne of his ancestor David; he will rule over the House of Jacob for ever and his reign will have no end.’ Mary said to the angel, ‘But how can this come about, since I am a virgin?’ ‘The Holy Spirit will come upon you’ the angel answered ‘and the power of the Most High will cover you with its shadow. And so the child will be holy and will be called Son of God. Know this too: your kinswoman Elizabeth has, in her old age, herself conceived a son, and she whom people called barren is now in her sixth month, for nothing is impossible to God’ ‘I am the handmaid of the Lord,’ said Mary ‘let what you have said be done to me.’ And the angel left her.

The lectionary puts these two passages together for theological reasons. The Genesis story was interpreted as the “fall of Man”, as a story of the “original sin” which spoiled God’s perfect creation and left all subsequent generations liable to sin. A version of this theology is found in St. Paul who sees sinful humanity united “in Adam” while rescued humanity is united “in Christ.” At least Paul put the blame on Adam, but subsequent church thinkers singled out Eve as the one who sinned first and then tempted poor old Adam. In this way Eve the mother of all living people became the mother of sin.

Mary on the other hand, the virgin mother of Jesus, officially asexual and obedient to God, was seen as Eve’s opposite, the mother of a new redeemed humanity through Christ. This interpretation is not found in scripture but is the creation of the church. It signals the start of a continuing cult of Mary, in which she almost ceases to be a human being and becomes a demi-Godess who makes her son acessible to sinners.

I can see why this happened. Converts in the Roman Empire, used to the comfort of a number of female deities, felt cheated by the pervasive masculinity of the Christianity presented to them. It had all sorts of other goodies, but almost nothing female. God was male, Jesus was male, the Apostles were male, perhaps even the Holy Spirit was male, the emerging church hierarchy was male. Christian men as well as women longed for an element of female goodness in this rugby club line up. Mary, the Virgin Mother, filled the gap perfectly. This began a long process of distortion by which the Galilean mother of Jesus and at least four other children (“bothers and sisters”) became the forever virgin Queen of Heaven, until at last in 1950 her “bodily assumption” into heaven was confirmed by Papal decree. 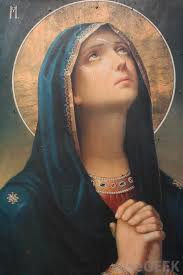 A specific connection between Eve and Mary was provided by interpretation of the promise that the Eve’s offspring would crush the  serpent’s head: Jesus who defeated Satan, was seen as this offspring.

At the time of the Reformation, this whole complex of theology was attacked by Luther, Calvin and other leaders. The “worship” of Mary was seen as a heresy typical of the corrupted practice of the Catholic Church and therefore banned under threat of punishment. Statues of the Virgin were defaced and destroyed in all places ruled by the reformed church.

That’s the history. What are we to say about the linking of Eve and Mary today?

1. Christianity still has an issue about the lack of a female element in its theology. There are signs of change here with the use of inclusive language in scripture, worship and meditation, and many churches have female clergy. But there is a sense in which these are minor correctives of a fundamental “maleness” in Christian tradition. It’s no wonder that the cult of Mary continues to set a woman alongside “men” at the heart of worship and prayer. It’s just a pity that she is the dream woman of a celibate hierarchy rather than a real historical woman or some convincing symbol of the femaleness of God.

2. The interpretation of Genesis chapter 3 as the story of the “fall of Man” is forced. The Old Testament knows no such fall-human beings are presented as a stubbon mixture of good and evil, often acting against God’s commands and advice- but they remain capable of genuine goodness. The snake is not a devil but simply the representative of human arrogance, the desire to be like God on your own terms. God’s curse is simply a desperate attempt by God to limit the human potential for evil: the man will have to work, the woman will be subject to the man and bear children in pain, just as  the snake will lose his legs.  In othe words the writer explains “the way things are” as God’s plan B. Eve needs released from  her role as the original sinner and celebrated as the mother of us all. 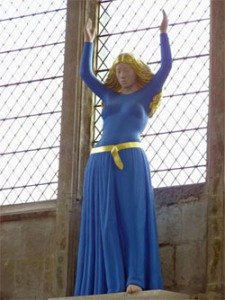 3. Mary too, needs rescued from her fate as the idol of female obedience. As Luke presents her she is part of an extended family whose women especially are  committed to messianic expectation, perhaps even to the hope that one of them may be the mother of the Messiah. They are of the “poor of the land”, the class of people noted for their hard work and piety. Her response to God’s messenger is always depicted as meek obedience but we should listen to her more carefully. “I am the handmaid of the Lord,” she says. A handmaid is a female slave who would be sexually available to the male of the household. She gives herself as a woman to God. This is a passionate, reckless response to God’s call, which finds expression in her song, where she takes God’s choice of her as a sign that the injustices of the world will be overturned, the humble raised up, the mighty put down. Mary is far more than the bloodless paragon of Christian piety.