Brazil’s President Dilma Rouseff says, “The marks of torture are on me. I’m a victim” 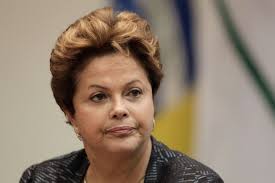 FIRST READING ISAIAH 48:17-19 ©
Thus says the Lord, your redeemer, the Holy One of Israel:
I, the Lord, your God, teach you what is good for you,
I lead you in the way that you must go.
If only you had been alert to my commandments,
your happiness would have been like a river,
your integrity like the waves of the sea.
Your children would have been numbered like the sand,
your descendants as many as its grains.
Never would your name have been cut off or blotted out before me.

I guess we might admit that probably no nation has ever done what God commands. Still, we have to say that some have been a lot better than others. But it is by no means the case that the more just nations have fared best in the history of the world, as this passage, whose blessings are as much material as spiritual, seems to promise. A relatively peaceful nation like The Czech Republic suffered two invasions in the 20th century while a militaristic nation like the USA has prospered. Although I am very much in favour of nations obeying God’s commands as interpreted by Jesus, I think the theology of this passage is mince. There is no guarantee that decent societies will prosper. They will be better places to live; they will foster the arts of peace; they will provide wholesome education for their children; they will promote a flourishing of human character; but they will not necessarily be rich, or populous, or safe from aggression. It took the crucifixion of Jesus to blow this

theology out of the water. Even if we take the long view, God does not enforce justice in this world, but only acts through those who are prepared to represent it.

Gospel
Matthew 11:16-19 ©
Jesus spoke to the crowds: ‘What description can I find for this generation? It is like children shouting to each other as they sit in the market place:

“We played the pipes for you,

and you wouldn’t dance;

and you wouldn’t be mourners.”

The kids in this passage are complaining that some of them just won’t play, whether the game is weddings or funerals.

Jesus compares them to his people who wouldn’t follow either John in his severity or Jesus in his friendliness. Yet in God’s wisdom both John and Jesus have done good. Jesus is pointing out that the popular reaction to both John and himself was trivial, based on frivolous life-style preferences. Different people in different situations may act differently to express the wisdom of God. People wil always find malicious excuses for not listening to the truth. I’ve done it myself.

Tags: god rewards obedience? 1000 reasons for not listening to wisdom