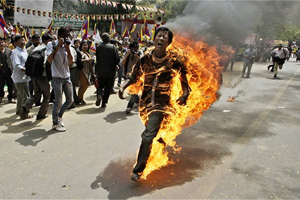 1 John 1:1-4 ©
Something which has existed since the beginning,

that we have heard,

and we have seen with our own eyes;

that we have watched

and touched with our hands:

this is our subject.

That life was made visible:

we saw it and we are giving our testimony,

telling you of the eternal life

which was with the Father and has been made visible to us.

What we have seen and heard

we are telling you

so that you too may be in union with us,

as we are in union

and with his Son Jesus Christ.

We are writing this to you to make our own joy complete.
Gospel

John 20:2-8 ©
On the first day of the week Mary of Magdala came running to Simon Peter and the other disciple, the one Jesus loved. ‘They have taken the Lord out of the tomb’ she said ‘and we don’t know where they have put him.’ 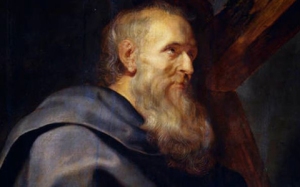 The Apostle John by Rubens

The tradition that Jesus gave his mother into the care of his beloved disciple and vice versa, is put in doubt by the witness of three gospels that there were no male disciples at the crucifixion of Jesus. Certainly the Gospel writer wanted to show that his mother’s true child was the loving disciple, representing the community of believers, but it would have been natural for Jesus to have entrusted the care of his mother to his followers. The extension of this tradition by which John is said to have taken Mary to Ephesus where her hhouse is still displayed, is more legendary.

There are core questons about the supposed author:

1. Is John son of Zebedee the “beloved disciple?

2. Is the beloved disciple who is described in the gospel as the “one who vouches for these things” the author of the gospel or its main source?

3. Is the “elder” who writes the second and third letters of John also the author of the first letter, and what realtionship does he have with the beloved disciple?

4. Is the prophet John, writer of the Revelation, related to John Zebedee or the beloved disciple or the “elder” of the letters?

My own not very scholarly opinion is that the answer to all of these is “no”; and that all we know for certain is that there was a branch of the  early Christian church which held a version of faith associated with John the disciple which was influential originally in the Roman province of Asia, and subsequently throughout the church.

Some special features of Johannine faith are present in the passage above:

1 Jesus is described as the creative “Word” of God and of Life.

2. This Word was made flesh and had a material existence in this world.

3. The original witness of faith comes from believers who have seen and touched the human Word.

4. The motive of witness is that those who accept it may enter a shared life, shared not only with other believers, but with God and his Son Jesus. Another name for this shared life is love.

5. The extenson of this shared life brings joy to the witnesses.

These are profound contributions to Christian thinking about Jesus, all of which have been important in the formation of my faith. Above all I feel indebted to the tradition of John for providing the first and only declaration in the bible, in the first letter of John 4:8, that God is love. When that truth is held as the foundation of faith, the worst crimes of religion are made more difficult.