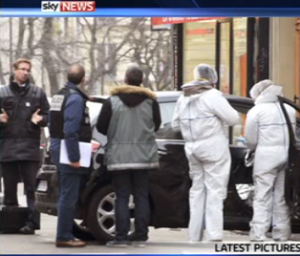 the abandoned getaway car of the killers. Please pray for the victims and their families. And their murderers.

GENESIS 2 (Darby translation altered by me)

And Jehovah Elohim took Man, and put him into the garden of Eden, to till it and to guard it.

16 And Jehovah Elohim commanded Man, saying, Of every tree of the garden you shall freely eat;

17 but of the tree of the knowledge of good and evil, you shal not eat of it; for in the day that you eat of it you shall certainly die.

18 And Jehovah Elohim said, It is not good that Man should be alone; I will make him a helpmate, his like.

19 And out of the ground Jehovah Elohim had formed every animal of the field and all fowl of the heavens, and brought them to Man, to see what he would call them; and whatever Man called each living soul, that was its name.

20 And Man gave names to all cattle, and to the fowl of the heavens, and to every beast of the field; but as for Man, he found no helpmate, his like.

21 And Jehovah Elohim caused a deep sleep to fall upon Man; and he slept. And he took one of his ribs and closed up flesh in its stead.

22 And Jehovah Elohim built the rib that he had taken from Man into a woman; and brought her to Man.

23 And Man said, This time it is bone of my bones and flesh of my flesh: this shall be called Woman, because this was taken out of a man.

24 Therefore shall a man leave his father and his mother, and cleave to his wife; and they shall become one flesh.

25 And they were both naked, Adam and his wife, and were not ashamed.

It does seem strange that God should not have thought of sexual partnership for humanity until his creature had met and named all animals and found them wanting as company. It’s as if sex was an afterthought. I mean, how were the animals to reproduce? The stories that use the name Jehovah (Yahwe) Elohim  often show God having to deal with unforeseen events, making plans B, catching up wiith reality. This portrayal puts a wise humour at the heart of its theology, that many later theologians would have done well to copy.

The naming of the animals by the human creature hints that something of each animal’s nature is determined by humanity. This is very different from the account in chapter 1, in which all animals are created prior to human beings. And yet, of course, what we call species are named and described by human science. The error by which we imagine that the existence of other creatures should be in some way determined by humans, goes as far back as this passage.

The splitting of the original Man into man and woman is both tender and comic. The unisex creature, Man, is anaestheitised and operated upon; God makes woman out of a rib, that is, from the bone that protects the heart, and offers this new creation to his human. It is only when the human creature accepts its new companion, that new words in Hebrew are used which clearly designate male and female, the words ish (man) and isha (woman). Only at this point does the Hebrew Adam (which means dust-creature) become the personal name of the man. I’m not sure if verse 24 is meant to be said by Adam, probably not as he hasn’t got a mother or father, but it gives us a reason for sex: once there was just one human body and ever since the split the two halves have been trying to get back together. This is a warm and witty view of sexual desire. The word “flesh” (Hebrew basar) indicates first of all, the skin of a body, that is the container of life, then the basic stuff of which all creatures are made. To become one flesh means to share the life of another person. 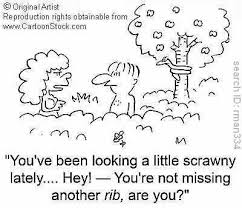 The Genesis account clearly imagines this as happening between male and female whose differing bodies point to an original unity. This does not rule out homosexual partnerships, it simply ignores them, which is largely true of the Bible, apart from one or two verses which stigmatise instances of homosexual behaviour as abominable. The modern debate on this issue tends to focus on the interpretation of a very few Biblical verses. We have to grow up. Much of the Bible is partriarchal and heterosexual in its prevailing assumptions; Jesus is the exception. That’s a fact. And just as it would be wrong to conceal that fact, it is also wrong to make too much of its occasional aspersions on homosexuality. In the light of Jesus, and with the inspiration of secular movements, we have outgrown the cultural framework of the Bible, and have to develop a new faith – culture which can nurture good sexual relationships today.

Meanwhile we can admire the humanity and humour of the heterosexual tradition in scripture, as here in the story of the “one flesh” and unashamed nakedness of our first parents. It is this very flesh which the Word of God becomes, according to the Gospel of John.

39 And Jesus was preaching in their synagogues in the whole of Galilee, and casting out demons.

40 And there comes to him a leper, beseeching him, and falling on his knees to him, and saying to him, If you want to, you can make me clean.

41 But Jesus, moved with compassion, having stretched out his hand, touched him, and says to him, I do want to, be made clean.

42 And as he spoke straightaway the leprosy left him, and he was made clean.

43 And having sharply charged him, he straightaway sent him off,

44 and says to him, See you say nothing to any one, but go, shew yourself to the priest, and offer for your cleansing what Moses ordained, for a testimony to them.

45 But he, having gone out, began to proclaim it much, and to spread the matter abroad, so that Jesus could no longer enter openly into the city, but was outside in desert places, and they came to him from every side. 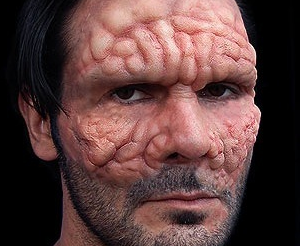 Mark moves on to emphasise the power of Jesus’ ministry in relation to one of the most marginalised groups in his society, lepers who were officially unclean, separated from family and community and responsible for preventing any accidental encounter with clean people. Doubtless having heard of Jesus’ healings, the leper comes before him with the heartbreaking utterance,”If you want to, you can make me clean.” The man thinks that Jesus is able to help but may not want to. The traditional Greek text of Mark has the word compassion in verse 41, but other ancient mamuscripts have the word, anger. This seems a less conventional reading which might have been changed by pious scribes. Jesus is angry at the degrading exclusion which has reduced the man to doubting his fellow citizens. Jesus signals his readiness to help by reaching out and touching the man. His hand crosses a huge divide, moves into taboo territory, and touches the untouchable person. This miracle of solidarity is followed by the miracle of healing. Jesus’ gesture abolishes the distance and the disease. Verse 41 is interesting for Mark’s skilful use of verb tenses, there are two past tense participles – moved with compassion/ anger and having reached out-,  then a past tense transitive verb,- touched- and then as the readers visualise the event, Mark draws them into it with a present tense verb  – says. Mark wants the reader to hear Jesus’ voice.

Jesus wants to distinguish his healings from quack medicine by commanding silence and sending the man to be declared clean by the authorities.

Some scholars say that Mark’s repeated statements that Jesus wanted his healings concealed is a device to cover up the fact that Jesus never did heal anyone, but like many other ancient heroes had miracles foisted on him by his followers. I think that’s unlikely. It seems likely that the united witness of the Gospels to Jesus as a healer is accurate. He not only taught, he threw out eveil spirits and restored health. Many healers of his time worked as he did, by the faith of the patient, enabling them to overcome their disease. A  friend of mine, Dr. Audrey Dawson, a distinguished physician and bible student noted wryly that there are no stories about Jesus healing a fracture. Healers like Jesus, both then and now, have success with diseases on which the patient’s own attitude and immune system may make some impact. So although I recognise that the nature of Jesus’ healings has been altered and exaggerated by the tradition, I think it represents the fact that Jesus did heal people.

For Mark the significance of Jesus’ healings is that they show God’s goodness breaking into the kingdom of Romans and Jewish leaders of which the true ruler is the Satan, the evil one. To be a channel of God’s peace in such circumstances,Jesus has to draw close to suffering, exclusion, darkness and death, so that there is a conduit for God’s peace. I once tried to picture all this in a song, which used various healing acts of Jesus including this one:

“I am the unclean leper

and you’re the God that’s seen;

my skin is scarred and peppered

so can you make me clean?

Oh can you cross the frontier

can you leap the great divide

can you stand amidst the dark fear

that makes me turn and hide?”

and I gave Jesus’ answer:

“I am the body broken

I am the poured out wine

I am the word that’s spoken

and your pain will be mine.

Oh I will cross the frontier

I’ll hang amidst the dark fear

I’m always at your side.”

Tags: male and female in Bible, One flesh, unisex man in bible