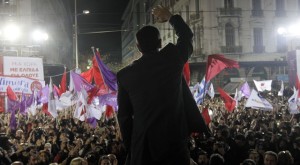 Alexis Tsipras speaks to his people

1. God blessed Noah and his sons and said to them:

Bear fruit and be many and fill the earth!

Fear-of-you, dread-of-you shall be upon all the wildlife of the earth and upon the birds of the heavens,

in your hand they are given;

all things crawling about that live, for you shall te be for eating,

as with the green plants, I now give you all.

However flesh with its life, its blood you are not to eat!

However too: for your blood, for your own lives, I will demand satisfaction

from all wild animals I will demand it,

and from humankind, from every man regarding his brother,

for that human shall his blood be shed

for in God’s image he made humankind.

AS for you-bear fruit and be many, swarm on earth and become many on it!

God said to Noah and his sons with him:

As for me, here, I am about to establish my covenant with you and with your seed after you,

and with all living things that are with you: birds, herd animals and all the wildlife of the earth with you,

all those going out of the Ark, of all the living things of the earth,

I will establish my covenant with you.

All flesh shall never again be cut off by the waters of the Deluge, never again shall there be Deluge to bring the earth to ruin!

This is the sign of the Covenant which I set

between me and you and all living things that are with you,for ageless generations: 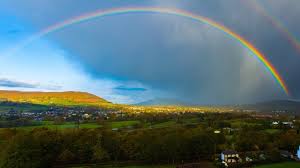 My bow I set in the clouds

so that it may serve as a sign of the covenant between me and the earth.

when I becloud the earth

and in the clouds the bow is seen

I will call to mind my Covenant

that is between me and all flesh. Never again shall the waters become a deluge to bring all flesh to ruin!

When the bow is in the clouds

I will look at it.

to call to mind the age-old Covenant

between God and al living beings-

all flesh that is on the earth.

This is the sign of the Covenant that I have established between me and all flesh that is on earth.

First of all God renews his blessing upon human beings and commands them to have children and occupy the earth. But now part of God’s provision for human nourishment includes animals. The bond between human beings and animals is severed so that animals will have a natural dread of human beings who may hunt them or keep them for food. Eating the blood of an animal is still seen as disrespect for God’s gift of life, but this is nevertheless the beginning of humans as carnivores. Although this is God’s plan B it can still be seen as a breach in creation, a reluctant permission. Certainly nothing in this sober story authorises the wholesale destruction of wildlife seen in our day, or the various forms of businesslike cruelty to animals, or the killing of God’s creatures for sport.

The sign of the rainbow is given great weight. The language is solemn and repetitious, emphasising and re-emphasising God’s commitment to his creatures on earth. We should take this as an expression of the author’s faith: God’s commitment to life on earth is absolute. We can therefore measure the destructiveness of humanity by the fact that a new “Deluge” is threatened as a result of global warming, and massive extinction of species by pollution and greed. Human evil threatens to nullify the covenant which the Genesis author believed was symbolised by the rainbow. The God imagined by the author knows that he may be tempted by anger or weariness to permit another Deluge and therefore sets the bow in the sky, not so much as reassurance to humanity but as a reminder to himself of his covenant. This is a one-sided covenant, a promise which is without conditions; human beings promise nothing in return; because God knows that “what their heart forms is evil from their youth.” The unconditional promise of God provides space and time for God’s plan to restore goodness to the earth, which is yet to be revealed.

35 And on that day, when evening was come, he says to them, Let us go over to the other side: 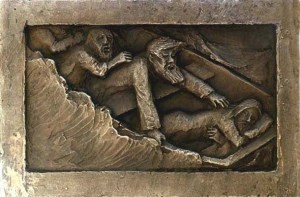 36 and having sent away the crowd, they take him with them, as he was, in the ship. But other ships also were with him.

37 And there comes a violent storm of wind, and the waves beat into the ship, so that it already filled.

38 And he was in the stern sleeping on the cushion. And they awake him up and say to him, Teacher, do you not care that we are perishing?

39 And awaking up he rebuked the wind, and said to the sea, Silence; be quiet. And the wind fell, and there was a great calm.

40 And he said to them, Why are you so fearful? how is it you have no faith?

41 And they feared with great fear, and said one to another, Who then is this, that even the wind and the sea obey him?

Our study of Genesis has taught us that in Bible literature the unruly waves are a symbol of chaos and the power to control them belongs to the Creator. In this symbolic episode in Mark’s story, he shows Jesus’ disciples menaced by a storm, while Jesus is “asleep” – which mimes his death. Their fear leads them to call upon him at which point he “awakens up” – which mimes his resurrection – and speaks a word of command to the waters, showing the creative power which God has entrusted to him. As I have said repeatedly, in Mark’s story Jesus is always the crucified and risen Lord, who brings God’s creative goodness to humanity. The disciples’ awe-struck question echoes that of the Galilean crowd, “Who is this?” Jesus’ identity is a unifying thread in Mark’s Gospel. He is the Son of God who fights against evil by being with its victims in the places of chaos, fear and death, so that he may lift them up into the goodness of God.

Is that anything more than a piece of theology? Yes. It means that God encounters me in the hardest times and places of my life; that I can trust that I shall not be overwhelmed and even learn some  courage in facing them. It means that God’s Spirit drives his servants including me into those places in the lives of others, so that we may be instruments of rescue for them, as others have been for us. It is theology and it points to reality.