APARTHEID TORTURER AND ASSASSIN GIVEN FREEDOM IN S.A.

Now also Lot, who had gone with Avram had sheep and oxen and tents

and the land could not support both of them to settle together,

for their property was so great that they were not able to do so.

Now the Canaanite and the Perizzite were settled in the land.

Pray let there be no quarreling between me and you, between my herdsmen and your herdsmen,

for we are brother men!

Is not all the land before you?

Pray part from me!

If to the left then I to the right,

if to the right, then I to the left.

how ell-watered was it all, before YHWH brought ruin down upon Sedom and Amora,

So Lot chose for himself all the plain of Jordan.

Lot journeyed eastward, and they parted, each man from the other.

Avram settled in the land of  Canaan, while Lot settled in  the cities of the plain, pitching his tent near Sedom.

Now the men of Sedom were exceedingly wicked in the eyes of YHWH.

YHWH said to Avram, after Lot had parted from him:
Pray lift u your eyes ad see from the place where you are, to the north, to the Negev, to the east, to the Sea,

indeed all the land tha you see, I give it all to you and to your seed, for the ages.

I will make your seed like the dust of the ground,

so tat if a man could measure the dust of the ground so too could your seed be measured.

Up, walk about through the land in its length and its breadth, for  give it to you.

Avram moved his tent and came and settled by the oaks of Mamre, which are by Hevron.

There he built a slaughter site to YHWH.

Although the oldest strand of this edited narrative dates from at least 600 years after the events it records, it does keep a sense of the rhythm of nomadic life. In time of famine Avram has been in Egypt from which he has emerged with large herds back into Canaan. There has been a dispute about land rights with his nephew Lot which is solved by a generous offer to give Lot first choice of land. Then Avram journeys over his land to a sacred site he has already marked at Mamre. The ground itself is important, although Avram will never finally settle upon it. The promise of YHWH is made in terms that appeal to a man who travels over the land. “I will make your seed like the dust of the ground”. The author is reminding his audience that human beings were made out of the dust of the ground, meaning that this is another act of the creator God. 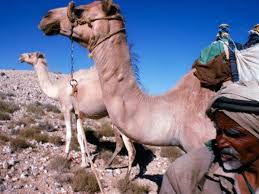 There is also a love for this particular piece of land, which in the author’s knowledge is the land promised to Israel’s twelve tribes, the land where God’s blessing for the whole earth is prepared. The reader knows that this choice of land has been overseen by YHWH and that Lot’s choice, although seemingly advantageous, places him in a land doomed to destruction, the cities of the plain. Step by step, the author shows how YHWH’s plan works: there is a divine blessing but the human beings it affects have still to make their own decisions. Nothing happens by magic. God speaks with Avram, and is happy as we shall see for Avram to speak with him. This indicates a partnership which becomes the heart of the story of Israel. God is the God who speaks; Israel is the people that speaks back; and often this dialogue involves a leader or seer who is good at listening to God.

Nobody should imagine that this speaking partnership is a primitive and outdated relationship, or for that matter, a  literary construction merely. To be educated and trained by these stories is to learn how to listen to that Other and even to have the gumption to speak to that Other. That is how I have been trained and how I live. It’s the only thing I’m good at. It does not make me a good person, although perhaps it has saved me from being a lot worse. It does not make me a religious person, for these dialogues do not take place in church and their content would scandalise the pious. It does not even give me revelations I can pass on to others, since they are part of my discipline and not for public consumption, except in necessity. This explains why the book of Genesis records so few “conversations with YHWH”. The great figures of Israel’s past who walked and talked with God, left only brief snippets of their life-long conversation with God, for the benefit of their descendants.Their dialogue is only meant to encourage ours, not to be a substitute for it. Faith begins when inspired by scripture, we leave scripture behind to deal with God.

30 And the apostles are gathered together to Jesus. And they related to him all things, both what they had done and what they had taught.

31 And he said to them, Come yourselves apart into a desert place and rest a little. For those coming and going were many, and they had not leisure even to eat.

32 And they went away apart into a desert place by ship.

33 And many saw them going, and recognised them, and ran together there on foot, out of all the cities, and got there before them.

34 And on leaving the ship Jesus saw a great crowd, and he was moved with compassion for them, because they were as sheep not having a shepherd. And he began to teach them many things.

36 send them away that they may go into the country and villages around, and buy themselves bread, for they have not anything they can eat.

37 And he answering said to them, You give them something to eat. And they say to him, Shall we go and buy two hundred denarii worth of bread and give them to eat?

38 And he says to them, How many loaves have you? Go and see. And when they knew they say, Five, and two fishes.

39 And he ordered them to make them all sit down by companies on the green grass.

40 And they sat down in ranks by hundreds and by fifties.

41 And having taken the five loaves and the two fishes, looking up to heaven, he blessed, and broke the loaves, and gave them to his disciples that they might set them before them. And the two fishes he divided among all.

42 And they all ate and were satisfied.

43 And they took up of fragments the fillings of twelve hand-baskets, and of the fishes.

44 And those that ate of the loaves were five thousand men.

Mark composed this passage as a contrast with the preceding story of Herod’s banquet, which tells of a ruler who, almost literally, consumes his people. In this story, Jesus, the true ruler feeds his people. It is of course a miracle story. It is certainly not meant to be rationalised, as it is when the miracle is turned into a communal process of sharing. Mark means his story to assert that the impossible goodness of God has happened in Jesus.

We should note some details:

it happens in the desert, the place where God fed the people with manna and quails

Jesus sees that the crowd is like sheep without a shepherd. This reminds the reader that Israel’s kings were called shepherds, especially David; and of David’s psalm 23, The Lord is my shepherd, I shall not want.

Jesus makes them sit down oo green grass where the Greek word is the same as used to translate the “green pastures” of Psalm 23, which is a sub-text for this story

The loaves and the fishes are what the disciples have

Jesus blesses, breaks and gives the bread, words that remind readers of the Lord’s supper

the leftovers fill 12 baskets, i.e. enough for the twelve tribes of Israel

We can interpret the story as an image of Jesus the shepherd king who leads his people through the desert, provides them with refreshment, organises them in communities against the “evil powers”, feeds them with what he and his “court” possess, with a hint that all he has and is, will be blessed, broken and given, for the sake of his people, for whom he has “prepared a table in the presence of their enemies”, and whom he will accompany through the “valley of the shadow of death.” God’s generosity in Jesus calls a new Israel into existence.

Somewhere, quite far back in the development of this story there was doubtless some gathering of Jesus and a large number of supporters in the wilderness, but as Mark presents it, the story has become a complex set of messianic images, characterising Jesus as the true king.

And yet, it’s still on a small scale really, it’s just Galilee and it’s only a few thousand people. The scale of Jesus’ ministry is always personal and communal, never a mass movement.

The story should continue to provide models for “Jesus politics” in any era. It’s interesting to see that new political movements in Europe show people responding to leadership which refuses to feather its own nest, and works for the welfare of the people.