BARGAINS AT THE WESTIN EXCELSIOR, ROME! 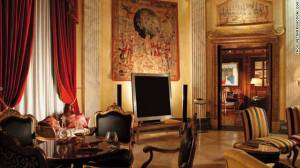 This blog offers a daily reading of Genesis and the Gospel of Mark. This series began on 1st January 2015 and can be accessed from my archives. I normally use the Schocken Bible translation for Genesis.

After these events JHWH’s word came to Avram in a vision saying:

Be not afraid, Avram,

I am a shield-of-deliverance to you,

your reward is exceedingly great.

what would you give me=

for   am going t die accursed

And the Son Domestic of my House is Damascan Eliezer.

Look, to me you have no given seed,

look, the Son of my House must be my heir.

But look, YHWH’s word came to him saying:

This one shall not be an heir to you;

rather, the one that goes out from your own body, he shall be your heir.

He brought him outside and said:

Pray look toward heaven and count the stars,

can you count them?

And he said to him:

so shall your seed be.

Now he trusted in YHWH,

and he deemed it as righteous merit on his part.

Avram is depicted as man of faith, prepared to take a risk for faith, but not a fool. He is being promised a reward in his descendants but he has no children, and views his chief servant Eliezer as his heir. The author shows him again as a “seer”: he sees YHWH in a vision, speaking to him. Bu he is quick to express his doubts about God’s plan; his feet are on the ground; he is no ecstatic visionary.He is  answered by the most explicit promise from YHWH: “the one who goes out from his own body”,his own seed, shall be his heir.

In the case of the patriarchs of Genesis, there is a question mark over the usual process of “begetting heirs”, almost as if the tradition wants to question the patriarchal assumptions and to make clear that the “heirs”are selected by God. The same pointis made as we shall see, bythe tradition of circumcision: The fathers do not own their own seed. 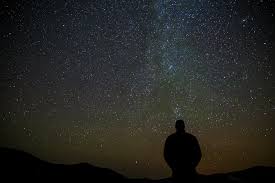 can you count them?

YHWH’s command for Avram to view the heavens relates YHWH’s creation of descendants for Avram with his creation of the stars. At another time of doubt in the scriptures, the second prophet Isaiah is told to look at the stars and asked, “Who created these?” The improbable number of the stars is a reminder that YHWH can bring about improbable blessings.

In view of this spectacle, Avram “trusted in YHWH”, in Hebrew, “he made YHWH his support.” It s an act of trust which repeats his obedient trust demonstrated in his journey from Haran into Canaan. The author is delineating the intimacy and the distance of trust in God. On the one hand it refers the man to his own seed; on the other it refers him to the maker of the stars. These dimensions of trust are evident still in all the Abrahamic traditions of faith; and are essential to their authenticity. Take away the intimacy and you are left with a distant authority; take away the distance and you are left with a supernatural creep.

The whisper of God engages me because it touches my dearest concerns; but I reverence it because it comes from beyond the edges of the universe.

This act of trust in God was highlighted by St Paul in his letter to Galatians as the means whereby God’s goodness is made available to human beings. God trusts them as being righteous, not because they have obeyed a religious law but because they have “made God their support”. God responds to a person’s trust, by trusting that person to “become the goodness of God” as Paul puts it in Corinthians. This goes beyond what is written of Avram here, but it is not foreign to its spirit.

54 And on their coming out of the ship, immediately recognising him,

55 they ran through that whole country around, and began to carry about those that were ill on couches, where they heard that he was.

56 And wherever he entered into villages, or cities, or the country, they laid the sick in the market-places, and besought him that they might touch if it were only the hem of his garment; and as many as touched him were healed.

It seems likely to me that Mark had in mind some words from Job chapter 26:

By his power he stilled the sea; by his understanding he smote Rahab.

By his wind the heavens were made fair; his hand pierced the fleeing serpent.

Lo, these are but the outskirts of his ways; and how small a whisper do we hear of him! But the thunder of his power who can understand?” 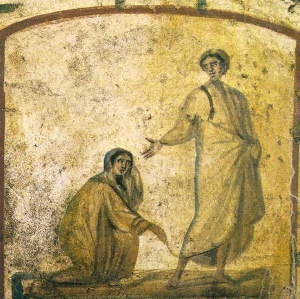 The “outskirts”, the “extremities of a thing”, may have been connected in Mark’s mind with the hem of Jesus’ garment. The Job passage describes God’s creative power overcoming the primeval waters with their sea-serpent Rahab, representatives of chaos and evil. Mark depicts Jesus as the representative of God’s creative goodness, made available to human beings in his ministry. But whereas the Job verses use the word “outskirts” to say how little we know of God, Mark uses the word “hem” to say that God’s goodness is near to needy human beings. The Job passage will have come to Mark in connection with the previous episode of Jesus walking on the stormy waters of the lake.

Mark gives a vivid picture of the magnetic attraction of Jesus, drawing people from all around to the village marketplaces, their hands reaching out to touch the hem of his robe. With that picture in our heads, we can add the verse from Job:
“Lo, these are but the outskirts of his ways: and how small a whisper do we hear of him! But the thunder of his power, who can understand?”

Tags: the fringes of his ways, The seed of Abraham, trust the source of goodness