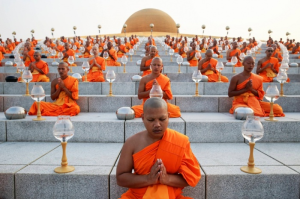 Now I came to the well today and said:

YHWH, God of my Lord Avraham,

pray, if you wish to grant success to the journey on which I am going,

here:  I have stationed myself by the water spring;

that the girl who comes to draw,

to whom I will say, Pray give me a little water from your pitcher t drink,

and she says to me, You drink and I will draw also for your camels –

Let her be the woman whom YHWH has decided on for the son of my lord;

And I, even before I had finished speaking in my heart,

here Rivka came out, her pitcher on her shoulder,

she went down to the spring and drew,

I said to her: Pray give me to drink!

In haste she let down her pitcher from herself and said:

Drink, and I will also give your camels to drink.

I drank, and she also gave the camels to drink.

Then I asked her, I said: Whose daughter are you?

She said: the daughter of Betuel, son of Nahor, whom Milca bore to him.

I put the ring on her nose and the bracelets on her wrists,

and in homage I bowed low before YHWH, and blessed YHWH, God of my lord Avraham,

who led me on the true journey to take the daughter of my lord’s brother for his son.

See now, if you wish to deal faithfully and truly with my lord, tell me,

and if not, tell me,

that I may know to turn right or left.

Lavan and betuel answered, they said:

The matter has come from YHWH;

we cannot speak anything to you evil or good.

Here is Rivka before you.

Take her and go, that she may be a wife for the son of your lord, as YHWH has spoken.

when Avraham’s servant heard these words, that he bowed to the ground before YHWH,

and the servants brought out objects of silver and objects of gold, and garments, and gave them to Rivka,

and he gave presents to her brother and to her mother.

The narrative continues at a measured pace, allowing for attention to detail and  especially to words spoken. Storytelling conventions regarding the oasis as a place of meeting between women and men, because it was a place where women came without men, and regarding the acceptable courtesies of matchmaking and hospitality, are used by the author. He also constructs the masterly speech of the servant who tells:

1. that he entrusted his search to YHWH in prayer, knowing that this was the climax of his “journey”. This reminds his hearers of Avraham’s journey away from his family which is now reversed in his servants return. His prayer has imagined in advance what will happen at the well.

2. that his prayer was answered almost before he had finished it, by the arrival of Rivka.

3. that the correct courtesies were observed between male stranger and female resident.

4 . that he was not merely looking for an acceptable woman, but for someone of Avraham’s family.

5. that his initial gifts, the ring and the bracelets, are a sign of his lord’s request for a wife. 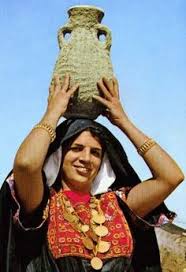 Although the servants approach to Rivka has been delicate it has also been very direct. The measured words, along with the giving and receiving of gifts are charged with sexual meaning and not simply tools of negotiation. Although Rivka, the woman, is subject to the decisions of her family, her own desire is not irrelevant, as we shall see. The servant successfully depicts his human journey as blessed by YHWH, who uses the human wisdom of the servant to accomplish his overriding plan for Avraham’s family. This intertwining of human and divine purpose is constructed very skillfully, so that the full humanity of the human agents is never infringed by supernatural interference, while the imagination of the human beings is ever open to God’s goodness: these people, in their specific individuality, are the humanity of God. The subtlety of the author’s theology is clearly seen in his storytelling.

32 And they were in the way going up to Jerusalem, and Jesus was going on before them; and they were amazed, and were afraid as they followed. And taking the twelve again to him, he began to tell them what was going to happen to him:

33 Behold, we go up to Jerusalem, and the Son of man shall be delivered up to the chief priests and to the scribes, and they shall condemn him to death, and shall deliver him up to the gentiles:

35 And there come to him James and John, the sons of Zebedee, saying to him, Teacher, we wish that whatever we may ask you, you would do it for us.

36 And he said to them, What do you wish that I should do for you?

37 And they said to him, Give to us that we may sit, one on your right hand, and one on your left hand, in your glory.

38 And Jesus said to them, You do not know what you ask. Are you able to drink the cup which I drink, or be baptised with the baptism that I am baptised with?

39 And they said to him, We are able. And Jesus said to them, The cup that I drink you will drink and with the baptism that I am baptised with you will be baptised,

40 but to sit on my right hand or on my left is not mine to give, but for those for whom it is prepared.

Many modern scholars have assumed the Jesus’ prediction of his own death are inventions of the gospel writers. It seems to me very unlikely that Jesus would not have foreseen the consequences of his actions. Doubtless the details of the prophecy are imported from the story of his suffering, but they are part of the united witness of the New Testament that Jesus saw his rejection and suffering as part of his ministry. Modern scholarship often attributes to the early church the creative imagination to see Jesus’s suffering as central to his mission, but strangely denies this capacity to Jesus himself. We should be place the predictions of suffering as Mark has done alongside Jesus’ concern for the little ones, the divorced women, and other vulnerable people. He is not merely concerned about them; in sober truth he shares their vulnerability.

In view of this, the request of James and John seems unimaginably crass: just at the point where Jesus indicates his downward trajectory they demand to move upwards, to be part of his “glory.” Mark puts this word on their lips knowing that his story will end with a gentile acknowledging God’s glory in the crucified Jesus. The cup of which Jesus speaks is first of all an image of voluntary suffering and baptism an image of immersion in the waters of death, before they are reminders of the Lord’s Meal and the Baptism of the first Christian communities. Jesus’ teaching here dismisses the tunes of glory as irrelevant noise, and asks his disciples to see that their silent sharing of his own suffering is their true music. Martin Luther said at table, “To those who are always chanting ‘Glory, glory’ I always reply, ‘Cross, cross.'”

Tags: Rebecca, the humanity of God, the request of James and John