This blog has been following the book of Genesis and the Gospel of Mark in tandem. Blogs from 1st January can be accessed from my archives. I am using the Schocken Bible for Genesis and the Darby translation for Mark, both of them very literal. The headlines are there to remind me of the world.

Now these are the begettings of Yitzhak, son of Avraham.

Yitzhak was forty years old when he took Rivka the daughter of Betuel the Aramean, from the country of Aram, sister to Lavan the Aramean, for himself as a wife.

Yitzhak made entreaty YHWH on behalf of his wife, for she was barren and YHWH granted his entreaty.

But the children crushed one another inside her, so she said:

If this be so

why do I exist?

And she went to enquire of YHWH.

YHWH said to her:

Two nations are in your body,

two tribes from your belly shall be divided;

tribe shall be mightier than tribe,

elder shall be servant to younger!

When her days were fulfilled for bearing, look: twins were in her body!

The first one came out ruddy, like a hairy mantle all over

so they called his name, Esav / Rough One.

After that his brother came out, his hand grasping Esav’s heel,

so they called his name Yaakov / Heel-holder.

Titzha was sixty years when she bore them.

The lads grew up;

Esav became a man who knew the hunt, a man of the field,

but Yaakov was a plain man , staying among the tents.

Yitzhak grew to love  Esav, for he brought hunted-game for his mouth;

Once Yaakov was boiling some stew,

when Esav came in from the field, and he was weary.

Pray give me a gulp of the red-stuff, that red-stuff

for I am so weary!

Sell me your firstborn-right here-and-now.

Here I am on my way to dying, so what good to me is a firstborn-right?

Swear to me here-and-now.

He swore to him and sold his firstborn-right to Yaakov.

he ate and drank and arose and went off.

Thus did Esav despise the firstborn-right. 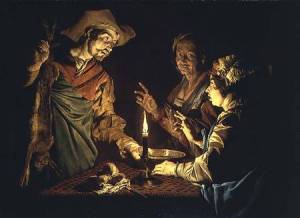 With this section the narrator begins the story of the third patriarch Yaakov, while continuing the story of Yitzhak, the second. Again the audience is alerted to the importance of a birth by the fact that the mother has been a long time childless and that YHWH has granted her fertility. YHWH is committed to the life of this family and ready to work through all the complex human relationships within it. The folk-tale style prophecy that the younger twin will rule the elder; that the one loved by the mother will rule the one loved by the father; these are signs that God does not necessarily work through the ordinary hierarchies of family life, but has plans which only an upstart can fulfill.

The audience is given an immediate character sketch of Esav and Yaakov in the incident of the firstborn-right. The audience will dislike Yaakov for his predatory attitude to his elder brother, while also regretting the sensual slothfulness of Esav:

“He ate and drank and arose and went off” is a beautifully brief summation of Esav’s character. He’s presented here as an easy-going oaf who almost deserves a trickster for a brother. The audience will note that Yaakov’s treachery serves his sound estimate of the firstborn-right and its blessings.

Doubtless these tales represent the concern of the later nation of Israel with its origins and its rights; but they are also vivid, subtle, depictions of character, human and divine. This theology is a matter of weariness, stew, bread, boiled lentils, twins and treachery, that is, it’s focused on the stuff of life rather than abstracting from it. The language of primary human experience is also the language of, for example, the Lord’s Prayer.It is helpful to those who want to talk about God and human beings today.

11 And when they draw near to Jerusalem, to Bethphage and Bethany, at the mount of Olives, he sends two of his disciples,

2 and says to them, Go into the village which is over against you, and immediately on entering into it you will find a colt tied, upon which no child of man has ever sat: loose it and lead it here.

3 And if any one say to you, Why are you doing this? say, The Lord has need of it; and straightaway he will send it back here.

4 And they departed, and found a colt bound to the door outside at the crossway, and they loose him.

5 And some of those who stood there said to them, What are you doing, loosing the colt?

6 And they said to them as Jesus had commanded. And they let them do it.

7 And they led the colt to Jesus, and cast their clothes upon it, and he sat on it;

8 and many strewed their clothes on the way, and others cut down branches from the trees and went on strewing them on the way.

9 And those going on before and those following cried out, Hosanna! blessed be he that comes in the]Lord’s name.

10 Blessed be the coming kingdom of our father David. Hosanna in the highest!

11 And he entered into Jerusalem and into the temple; and having looked round on all things, the hour being already late, he went out to Bethany with the twelve.

Pussy Riot in the temple

Mark relies on the reader knowing the messianic prophecy of Zechariah 9:2,10:

9 Rejoice greatly, daughter of Zion; shout, daughter of Jerusalem! Behold, your King comes to you: he is just, and having salvation; lowly and rIding upon an ass, even upon a colt the foal of an ass.

10 And I will cut off the chariot from Ephraim, and the horse from Jerusalem; and the battle-bow shall be cut off. And he shall speak peace unto the nations; and his dominion shall be from sea to sea, and from the river to the ends of the earth.

Without this knowledge the whole business with the colt is meaningless. Scholars have questioned the historicity of this so-called triumphal entry into Jerusalem. Mark means his readers to understand that Jesus planned and staged this incident as a challenge to his people and particularly to its  religious leaders, knowing it would also be reported to the Roman administration.

So, following the story, we can only interpret it as Jesus’ open statement of his identity and purpose: he claims to represent God’s rule in Zion, bringing justice and rescue to his people, and to the Gentiles, but doing so in humility and peacefulness, without violence.

His entry to the city is also a fine parody of a Roman triumph, a donkey instead of a noble steed, pilgrims in place of legions, broken palm branches instead of precious perfumes. In spite of all that, (or is it because of all that?) the crowd welcomes him with unmistakably messianic language which constitutes a threat to the powers that be.

Ruled as we are in the UK by the puppets of a vicious and destructive capitalism, we should honour in the name of Jesus, the peaceful people of Syriza and Podemos, the persecuted clowns-for-justice like Pussy Riot and the tattered and torn rebels against tyranny throughout the world. As Mark depicts it, the Way of the One-who-brings-God’s rule is dark, but now and again, as with Jesus’ entry to Jerusalem, we can hear the laughter in the dark.