This blog follows the book of Genesis and the Gospel of Mark in tandem, using the Schoxken Bible translation of Genesis and the John Darby translation of Mark, both very literal versions. If you enjoy this blog you could also try. “orthodoxportlandmaine.org” by Kostas Sarantidis which provides reflections on bible and theology from a refreshingly radical Orthodox perspective.

now it was, when Yitzhak had finished blessing Yaakov

yes it was, Yaakovyes had just gone out from the presence of Yitzhak his father

that his brother Esav came back from his hunting.

he made a delicacy and brought it to his father.

he said to his father:

that you may give me your own blessing.

Yitzhak his father said to him:

which one are you?

I am your son, your firstborn, Esav.

Who then was he that hunted down hunted-game and brought it to me,

I ate it all before you came

and I gave him my blessing!

Now blessed he must remain!

When Esav heard the words of his father

he cried out with a great and bitter cry

and said to his father:

Bless me, me also, father!

Your brother came with deceit and took away your blessing.

Is that why his name was called Yaakov / heel-cheat? For he has now cheated me twice;

my firstborn right he took and now he has taken my blessing!

have you not reserved a blessing for me?

See, I have made him master to you

and all his brothers I have given as his servants,

with grain and new wine I have invested him,

Esav said to his father:

Have you only a single blessing, my father?

Bless me, me also , father!

And Esav lifted up his voice and wept.

Then Yitzhak his father answered, saying to him:

Behold, from the fat of the earth must be your dwellling place,

from the dew of the heavens aboveYou will live by your sword,

You will serve your brother.

But it shall be

that when you brandish it

yiu will tear his yoke from your neck.

And Esav held enmity against Yaakov because of the blessing with which his father had blessed him. 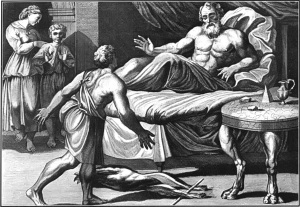 This is a long extract today but I included it all because it is so masterly in depicting pain. Anyone who has felt the terrible rages of sibling rivalry will sympathise with Esav; and any parent who has tried to deal with it will sympathise with Yitzhak. The genius of the storytelller Is that he can give this pain its authentic voice while not letting us forget that Esav has been a careless slob regarding his birthright and that Yitzhak has been not quite careful enough in giving his blessing to Yaakov.

In all truth, as Esav realises, his father only has a single blessing for an elder son and he has given it to Yaakov. That moment of total commitment to the future of his son under YHWH his God cannot be recalled. The blessing he does offer Esav is a secondary thing. The absence of YHWH’s name from the blessing given to Esav, reminds the audience that it has been invoked in Yaakov’s blessing; and also that Esav has been neglectful of YHWH in his choice of Hittite wives.

It ‘s only as the story proceeds that we see how Esav gets what he wants, a life of hunting and herding; while Yaakov only learns very slowly to value the blessing for its own sake. God’s blessing is not a gravy train.

18 And Sadducees come to him, that say there is no resurrection; and they demanded of him saying,
19 Teacher, Moses wrote to us that if any one’s brother die, and leave a wife behind, and leave no children, that his brother shall take his wife, and raise up seed to his brother.
20 There were seven brethren; and the first took a wife, and dying did not leave seed;
21 and the second took her and died, and neither did he leave seed; and the third likewise.
22 And the seven took her and did not leave seed. Last of all the woman also died.
23 In the resurrection, when they shall rise again, of which of them shall she be wife, for the seven had her as wife?
24 And Jesus answering said to them, Do not you therefore err, not knowing the scriptures, nor the power of God?
25 For when they rise from among the dead they neither marry, nor are given in marriage, but are as angels in the heavens.
26 But concerning the dead that they rise, have you not read in the book of Moses, in the section of the bush, how God spoke to him, saying, I am the God of Abraham, and the God of Isaac, and the God of Jacob?
27 He is not the God of the dead, but of the living. You therefore err greatly. 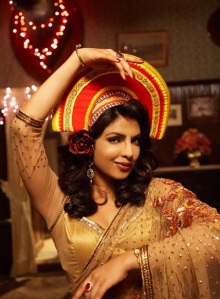 One bride for seven brothers

This comic question should not simply be dismissed as childish for it is a reduction to absurdity of popular piety about resurrection life even today. Christian may mock at or envy Muslim jihadists who believe they are promised top virgins in Allah’ s heaven, but many Christians are encouraged to believe that they will be reunited with their dear ones in heaven. Jesus’ sober reply rules out all such speculation : life with God is not a high – end version of life on earth. Some may think that if that’s the case, the game’s not worth the candle.

The assurance of Jesus that God is not the God of the dead but of the living is a powerful utterance depicting God as the presence of creative life which rescues his creatures from the dust of which they have been made. To be in God is to be in life. Faith in resurrcction was held by the Pharisees; Jesus confirms their faith by his teaching. But the full meaning of resurrection for Christian believers is only revealed in the resurrection of Jesus.

The other day I quoted the words of the Baal Shem that we say God of Abraham, God of Isaac, God of Jacob, because each person has to discover the truth of God for himself. Here Jesus uses the same phrase to indicate that the giver of life is loyal to each person who has faith.