This blog is following the book of Genesis and the Gospel of Mark in tandem. The whole series which started on 01/01/ 2015 can be accessed from my archives. The headlines are reminders of the world we live in. 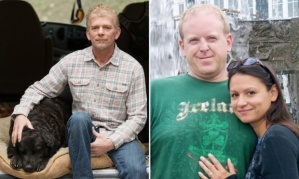 Yaakov took a stone and erected it as a standing pillar.

And Yaakov said to his brothers:

The fetched stones and made a mound.

They ate there by the mound.

while Yaakov called it: Gal -Ed.

This mound is witness between me and you today.

May YHWH keep guard between you and me, while we are hidden one from the other;

If you should ever afflict my daughters,

if you should ever take wives beside my daughters..!

No man is here with us,

but see, God is witness between you and me!

And Lavan said to Yaakov:

Here is the mound, here is the pillar that  have sunk between me and you;

that I will not cross this mound to you

and you will not cross this mound and this pillar to me, for ill!

And Yaakov swore by the Terror of his father, Yitzhak.

Then Yaakov slaughtered a slaughter meal on the mountain

and caled his brothers to eat bread.

They ate bread and spent the night on the mountain.

Lavan started early in the morning, kissed his grandchildren and is daughters and blessed them,

and Lavan returned to his place.

sometimes separation is the best balance

In the end, the invocation of YHWH brings separation and peace between Yaakov and Lavan. Both of them have cheated the other, but now both of them recognise the mysterious call of God which drives Yaakov back into the dangerous territory of his brother. There is solid human wisdom too, in the recognition that their struggle to best each other has become toxic and that separation of life and territory is desirable. Sometimes even God does not insist on reconciliation and is happy to become the guarantee of a just division. Those who’ve been involved in relationship counselling, know this truth.

The ritual of this settlement is important as it gives time and measured solemnity to the agreement which thereby becomes an established fact and not simply an intention.Both parties behave well and wisely; and the audience can sympathise after all with Lavan who accepts the loss of his daughters and grandchildren with dignity. The storyteller’s hero is Yaakov but he does not diminish the humanity of Lavan. Similarly the God of Genesis has his purposes but he recognises the human pain involved in achieving them.

And Judas Iscariot, one of the twelve, went away to the chief priests that he might deliver Jesus up to them;

11 and they, when they heard it, rejoiced, and promised him to give money. And he sought how he could opportunely deliver him up.

The Greek verb paradidomai = deliver up is central here. Literally it means to give someone or something over to another. So it can be used of handing on information, stories, commands ( the Latin equivalent is tradito which gives us English tradition =something  handed on or down as well as English traitor= one who treacherously hands someone or something to an enemy). In the New testament it is often used of ordinary acts of handing over as well as of betrayal. Jesus uses it when he tells the disciples that one of the will “betray” him, that is, hand him over to the authorities. Jesus is therefore handed over or delivered up to his cross. By the time Mark was writing St Paul had already written of the “God who did not spare his only son but delivered him up for us all.” 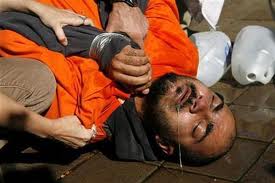 The multiple meanings of this verb allow Mark to put together an act of wickedness (Judas “handing over” Jesus to the priests) with an act of love (God handing over his dear son to suffering and death).

To be handed over is to be placed in the power of others. Many patients feel this loss of one’s own wishes when being treated in hospital. But there, most people have a deep trust in those who are treating them. But if people are handed over to malicious and brutal enemies their experience is very different: they are the mercy of those who show them no respect or care or kindness but abuse them physically and mentally. Those in the tender care of terrorists or for that matter of the Rendition Departments of the USA or UK, have spoken of how terrifying this powerlessness has been. Many of them will  never recover. Jesus experienced this same powerlessness when he was “delivered up” by Judas.

Mark emphasises the Judas was one of the twelve. In his betrayal of Jesus he is a representative of the other disciples who also betrayed him in his time of need. The difference between Judas and the rest is not that he alone betrayed Jesus but that he alone refused forgiveness.